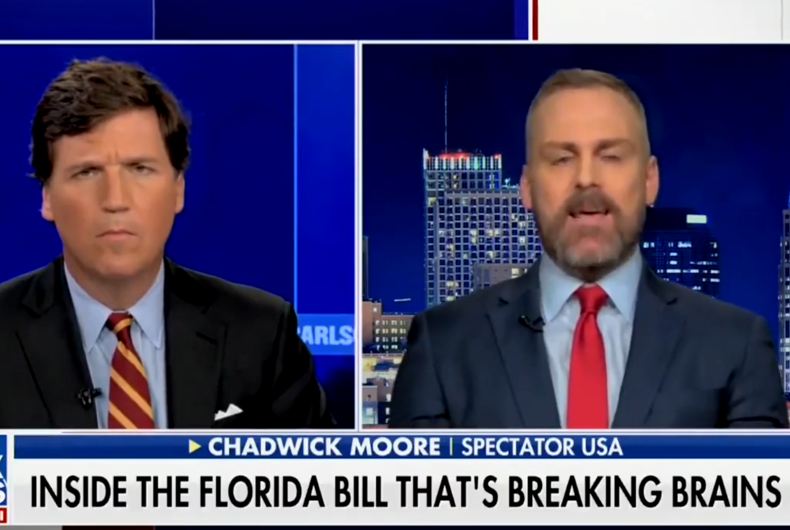 LGBTQ conservatives have decided to become the most ardent defenders of the bill that LGBTQ equality advocates say could increase LGBTQ teen suicide as young people will feel more alone and ashamed because who they are is considered too shameful to discuss in class.

Tucker Carlson asked Chadwick Moore of the Log Cabin Republicans why there’s so much “hysteria” about the bill. The bill was proposed as conservatives are trying to ban books all over the country that discuss racism and LGBTQ people, including even innocuous books like And Tango Makes Three, which is about a baby penguin with two dads.

“If wacky gay activists, childish wacky gay activists want to drive the White House, the Democrat Party, gay media like CNN into this arena of demonizing concerned parents after what happened in Virginia last year, this year now with the midterms coming up, I mean, more power to ’em,” said Moore, so excited to attack other LGBTQ people that he could only speak in incoherent run-on sentences. “It’s a terrible look!”

“The media doesn’t want you to read it because when you do you realize that it’s a perfectly reasonable, rational bill that would not even be necessary if parents didn’t become so privy to the insane things their teachers were saying to their students during lock-down,” he said.