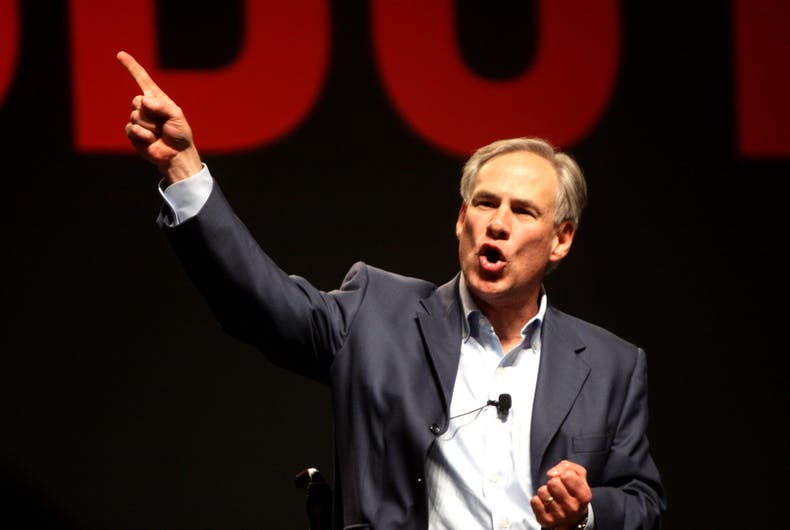 Texas Gov. Greg Abbott (R) – who is up for reelection this year – has unveiled a “Parental Bill of Rights” amidst soaring conservative efforts around the country to ban LGBTQ content from schools, as rightwing parents protest schools about library books and curriculum matters.

The Bill of Rights would amend the Texas constitution to make parents “the primary decision makers in all matters involving their children,” according to a press release.

This means parents would have greater access to course curriculum and that any concerns they have about what their kids are learning would be “heard quickly and respectfully.”

Under my Parental Bill of Rights, we will amend the Texas Constitution to reinforce that parents are the main decision makers in all matters involving their children. pic.twitter.com/z64eobbk7Y

The Parental Bill of Rights would also take aggressive action against any teachers that provide “pornographic materials” to students. However, conservatives, including Abbott, are increasingly defining any LGBTQ content as pornographic.

“Nothing is more important to the future of Texas than ensuring that the next generation have the support and resources they need to succeed, and no one is more important to that development, well-being and success of our children than their parents,” said Abbott, who is currently running for reelection, in a statement introducing the Parental Bill of Rights.

He declared that “no government program can or should replace the role that parents play in their children’s lives” and touted his efforts to “defend the rights of parents” by keeping schools open throughout the pandemic, banning mask mandates, and banning the teaching of “critical race theory” in schools, a catch-all term conservatives have been using for the past two years to describe education about racism in the U.S.

Abbott said the government continues to interfere in parents’ rights over their children.

“Many parents feel powerless to do anything about it, and that must end,” he said. “I am running for governor to bolster a Parental Bill of Rights to restore parents as the primary decision-makers over their child’s education and healthcare.”

Abbott is up for reelection this year. Primary elections are set for next month, and Abbott is facing a far-right challenger who has made opposition to LGBTQ rights a campaign issue.

“Parents’ rights” has become a conservative battle cry across the nation. Newly sworn in anti-LGBTQ Virginia Gov. Glenn Youngkin (R), for example, centered his recent campaign around the rights of parents who wish to shut down progressive policies in public schools.

And Florida Gov. Ron DeSantis (R) signed his own Parents Bill of Rights in June.

It is also becoming increasingly common for conservative parents to call for the banning of LGBTQ books from schools, arguing that they deserve the right to decide if their children are exposed to such content.

In November, Abbott sent a letter to the Texas Association of School Boards (TASB) asking schools to check whether they’re supplying pornography to children.

In the letter, Abbott gives no reason to believe that grade schools are giving students access to “pornographic images” other than a vague reference to “a growing number of parents of Texas students” who are “increasingly alarmed.”

And a month earlier, Texas Rep. Matt Krause (R-TX) sent a letter to the Texas Education Agency that included a list of 850 books, demanding schools share how many copies of each book they have and how much money they spent to obtain the books.

Shannon Holmes, Executive Director of the Association of Texas Professional Educators criticized Abbott’s Bill of Rights, saying it “reeks of grandstanding” and “would only serve to place additional governmental mandates on school districts and teachers already stretched to their limits due to staffing shortages.”

Intercultural Development Research Association, an education advocacy organization, called the Bill of Rights “nothing more than a coordinated attack on the rights of students, parents, and teachers in public schools.”

We expect to see a “parent’s bill of rights” released in Texas today. If it’s anything like similar proposals, it will be nothing more than a coordinated attack on the rights of students, parents, and teachers in public schools. #TeachtheTruth
🧵https://t.co/MYtNi6epKX