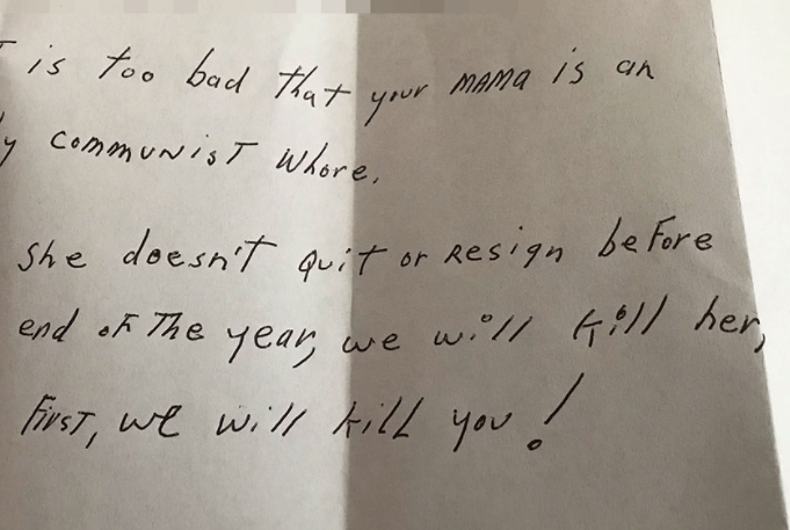 One of the death threats Brenda Sheridan and her family have received.Photo: Screenshot

Death threats against school board members are becoming so pervasive that even the child of a member received one because their mother works in a school district with a trans-positive policy.

“It is too bad that your Mama is an ugly communist whore,” the letter, addressed to the child of Loudoun County school board member Brenda Sheridan, read. “If she doesn’t quit or resign before the end of the year, we will kill her, but first, we will kill you!”

Sheridan, who was board chair last year and is still a member, became a target after rightwing media flogged a story for months about how a “gender fluid” student used the district’s accepting policy on transgender students in order to sexually assault a girl in the bathroom.

There were several flaws in using the story to attack the transgender policy. For one, the district’s policy took effect in August 2021 but the attack happened in May. The alleged assailant also wasn’t transgender. Nevertheless, conservatives discussed it ad nauseum as an example of school boards putting students at risk by enacting pro-LGBTQ policies.

And that wasn’t the only threat Sheridan received. Another person told her that they were going to “gut” her. The county’s sheriff’s office said that there were over 50 reports of threats against the school board from April through November last year.

“You people need to be arrested, tried and then hung by the neck until you’re dead,” another threat made by email said. Another said, “LGBTQ is an abomination” and ranted about “Antifa” and “leftist scum.”

Authorities submitted warrants to Google to get more information about who sent at least one of the threats, but all they got were multiple IP addresses that led nowhere. They said that they couldn’t get enough information to proceed with a prosecution.

“There’s no way to know: did that come from someone from another state, or is it my neighbor down the street who knows my routine?” Sheridan told Reuters.

“Your life is being laid bare on the open and dark web. I don’t condone what’s gonna be sent to those close to you or the danger they may be in,” an email sent to Loudoun superintendent Scott Ziegler said, referring to the sexual assault allegation. “But you personally do deserve it.”

Reuters was able to contact that person, who claimed that they were “warning” Ziegler, “not threatening him.”

“I’m not looking to be labeled anti trans,” they claimed.

Conservative parents – as well as many non-parents – across the country have been protesting school boards this past year, mostly in order to stop “critical race theory” – which they use to mean any sort of education about the U.S.’s history of racism – as well as transgender students getting treated equally, and mask mandates.

The problem has become so bad this year that the National School Boards Association has asked the Department of Justice for federal assistance for local law enforcement to handle the threats of violence against schools coming from enraged conservatives.