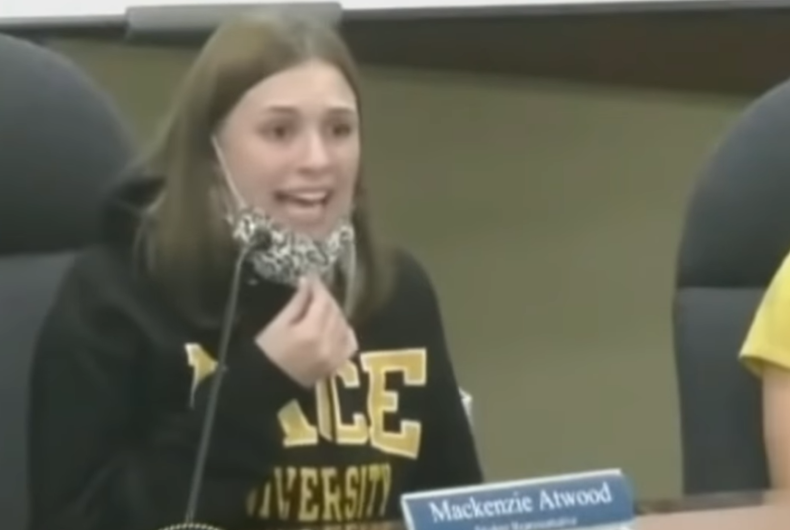 A gay student was talking at a school committee hearing at Franklin High School in Massachusetts about bullying this past Tuesday when she was heckled by a screaming, unhinged parent who said that being gay is part of “the indoctrination.”

Senior Mackenzie Atwood was responding to another speaker who was talking about protected classes in the district’s bullying policy. She said: “I am gay. Call me what you want about that, I’m being personally attacked in school about that.”

That apparently enraged a parent at the meeting who decided to prove Atwood’s point about the prevalence of homophobia by screaming: “This has to stop! This is the indoctrination!”

Committee chair Dr. Anne Bergen banged a gavel and asked the parent “to refrain” from speaking.

The brave student started crying, saying it’s “disgusting that you can look me in the eyes and say that I’m not being oppressed at this school.”

The parent shouted again about “My kid-” when Bergen banged her gavel and told the parent that they will “be asked to leave. Please sit down!”

“This has to stop!” the parent shouted back.

Later, Atwood told CBS Boston that the parent said that being gay is being “taught in schools.”

Superintendent Dr. Sara Ahern said that the parent’s screaming was “appalling” and “unacceptable” in a letter to parents.

Atwood said that the incident shows that it’s not just schools that need to fight bullying, but also parents. It’s about “people being more educated about respecting people’s identities.”

Across the country, conservative parents and even people who don’t have children in schools have been going to school board meetings to disrupt them on issues like pandemic rules, teaching about racism and diversity, and how transgender students are treated.

The problem has become so bad this year that the National School Boards Association has asked the Department of Justice for federal assistance for local law enforcement to handle the threats of violence against schools coming from enraged conservatives.