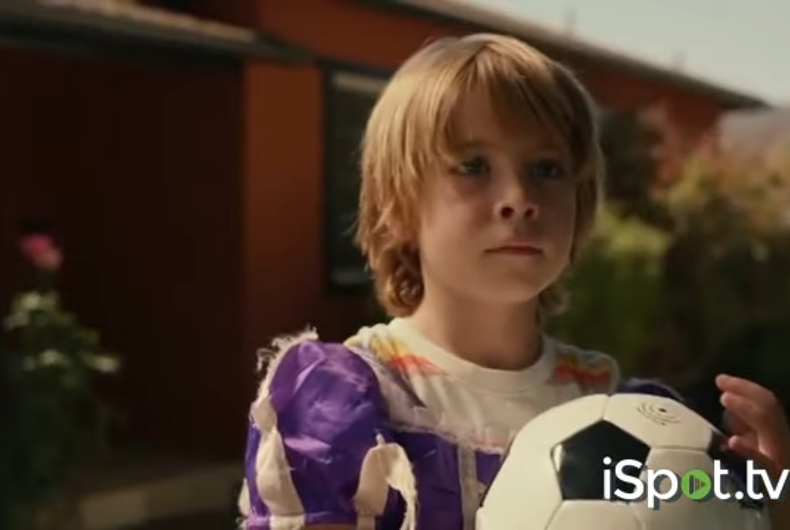 Editor’s Note: This article has been updated to reflect that the video is not a commercial, but a clip from a series.

Twix’s sponsorship of a Halloween-themed episode of Hulu’s “Bite Size Halloween” series is spawning outrage online from conservatives who are scared of the spot’s inclusive message. The video has mistakenly been confused as a commercial but is only a short clip from the episode.

The story features a young child who is perceived as a boy but likes to wear a princess dress. Their new nanny, a witch, protects the kid from bullies. The description of the episode reads, “With a little magic, the new nanny helps a non-binary child deal with bullies and find self-acceptance.”

Replete with all the stereotypes from witchy TV shows and films, including eerie wind, scared looks, and blowing hair, the clip contains other shocking content like an encouragement to wear a seat belt in the car. The candy bar is not shown.

Other episodes in the series were sponsored by other Mars candies like Snickers and Skittles. The series includes LGBTQ stories from 18 queer filmmakers.

But the rightwing outrage machine quickly roared into life over the “commercial” and soon conservatives were howling like a banshee.

The new Twix Halloween ad featuring a gender nonconforming child in a positive light has the maga crowd screaming for some reason.
🖤🤎❤️🧡💛💚💙💜 🏳️‍⚧️pic.twitter.com/r60RCoZPh3

“Your Halloween ad is disgusting,” Amanda Hernandez tweeted to Twix in response to a tweet warning everyone to “check your Halloween candy” because “my brother just found a Right TWIX bar in his Left TWIX pack.”

“Glorifying the occult, grooming children, and violence against children. Disgusting. You should be ashamed.”

“A boy likes to dress up, woman assaults a boy for expressing a view she doesn’t like and no one ate a chocolate bar,” another person complained.

“As long as it’s a babysitter witch using magic, it’s okay to fantasize about assaulting kids with wrong opinions,” one user sarcastically commented.

“You see kids, the way to handle intolerance is with violence. Advertisers have targeted kids for decades but it’s not about just selling stuff anymore,” Rachel Babbitt whined.

“I doubt the intent of the commercial is to teach kids to commit violence with magic,” Brandon Banks shot back.

“Ladies and gentlemen, I have for you the absolute dumbest, I-don’t-even-know-who-to-root-for culture war skirmish you will ever see, just on all sides, doesn’t get stupider than this,” columnist and podcaster Jesse Singal tweeted. Singal has repeatedly come under fire by transgender activists throughout his career.

“Assuming this is a left Twix ad, I’m kinda excited to see what the ad from right Twix looks like,” Andrew Jay replied.

“Right Twix is Joe Rogan sitting with Jordan Peterson telling his assistant Jamie to pull up a video of a bear fighting a mountain lion but in the video the bear and mountain lion make peace and sit around a campfire eating Twix bars instead of fighting,” someone else shot back.

“Before forming an opinion on this I’m going to wait to see what position is taken by the rest of Mars Incorporated’s portfolio of consumer brands,” James O’Malley snarked.

But another user may have summed it up best.

“I liked it. Teaching children they don’t have to tolerate bullies works for the good of the community as a whole,” they replied. “That’s the message. Why are you upset by that? These kids go through active shooter drills, I think they can handle this kind of advertisement.”

@twix your Halloween ad is disgusting. Glorifying the occult, grooming children, and violence against children. Disgusting. You should be ashamed.

She blew him away with a gust of wind

I doubt the intent of the commercial is to teach kids to commit violence with magic.

"Liberals are so fragile. They think words are violence!"

Before forming an opinion on this I’m going to wait to see what position is taken by the rest of Mars Incorporated’s portfolio of consumer brands.