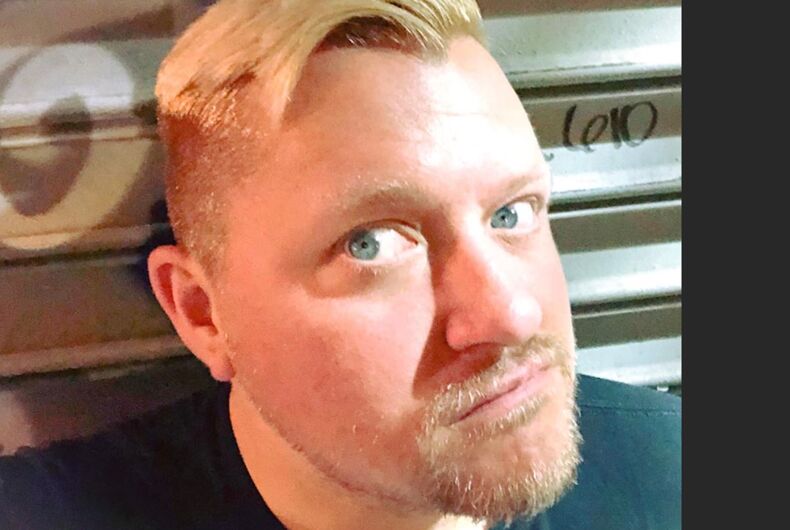 Michail Takach has always been a history buff. He believes that history can bring people together, and that when presented well, it can even change lives.

For the past 13 years, the sixth generation Wisconsinite has channeled his passion into chronicling the storied LGBTQ history of his state. Through the Wisconsin LGBT History Project, Takach has worked diligently to illuminate the stories of the countless queer Wisconsin folks who have contributed to the movement for equality.

“We recognized early on that our mission and purpose as a united team was to connect people with history and heritage that has long been hidden, silenced, and erased,” Takach told LGBTQ Nation.

He hopes his work shows Wisconsinites that LGBTQ history doesn’t only exist at places like Stonewall and San Francisco’s Castro District. Knowing one’s local LGBTQ history instills an important sense of pride and unity, he said.

The History Project was founded in 1995 by Don Schwamb and was a one-man operation until Takach doubled the team’s size. When he joined, he made it his mission to bring Schwamb’s decades of work to the forefront, to ensure as many people as possible could experience what the History Project had to offer. He began writing articles for local LGBTQ media, conducting walking tours, offering free presentations, providing daily history lessons on social media, and engaging with the community as much as possible.

Owners "Linda" and "Carrie" were off to a great start. Nitengales really was "the only place to be." The bar introduced a kitchen operation, with Friday fish fries, in February 1990. (1/) pic.twitter.com/2nLaQ42KyT

A statewide Black Nite Remembrance Day took place in August, giving much needed recognition to the late Josie Carter, the gender nonconforming person of color who started the uprising and who was interviewed by the History Project in 2011.

Tonight, we illuminate the Hoan Bridge and the Milwaukee harbor to ensure the brave warriors of the #BlackNiteBrawl finally feel seen, after sixty years, for transforming Wisconsin #LGBTQ history. #BeSeen 🏳️‍🌈🏳️‍⚧️ pic.twitter.com/3PCUARD7bw

“We got so much feedback from people who said, ‘This is amazing. I finally feel seen,’” Takach said.

The fact that his work is reaching people is the best possible reward, Takach said, especially at a time when LGBTQ history is barely taught in schools.

Currently, only six states in the country require some form of LGBTQ-inclusive curriculum. There are also four states that still have “no promo homo” laws on the books. These laws prohibit the teaching of LGBTQ issues in schools.

Right now in Wisconsin, Assembly Bill 562, introduced in September by Republicans, seeks to require schools to notify parents or guardians before teaching students any lessons related to gender identity, sexual orientation, gender, or gender expression. Parents would then be allowed to opt their children out of learning about these issues.

“So the importance of our work has never been more critical or urgent,” Takach said.

The winner, “Carl,” would go on to represent Triangle at the Mr. Gay Wisconsin Pageant title in November 1988. (1) #lgbthistory pic.twitter.com/BLprmjkMiY

Takach’s efforts are completely volunteer, as the History Project is self-funded, independent, and unsponsored. Despite now working full-time in communications in California, Takach said he finds time every day to engage with the History Project. He may live far away, but he said Milwaukee will always have his heart.

Takach was nominated as an LGBTQ Nation Hometown Hero by a fan who follows the History Project social media. The fan wrote about growing up in a family that did not support their sexual and gender identities and said the History Project helped them feel less alone.

“Michail teaches us that we have always been here, we have a lot to be proud of, and here’s the thousands of reasons why,” they said. “Every day I am reminded by Michail’s work that I am part of this history. I am grateful to know that I am part of a long, proud heritage of queer Milwaukeeans. This would not happen if he hadn’t taken the time to start documenting our history before it was lost forever.”

Takach said he is humbled by the recognition and hopes the History Project continues to empower all who engage with it.

“What our work does is it shows people there are a long line of people who came before you who had experiences just like you, and they triumphed and they accomplished things and hopefully, that’ll inspire people to do the same thing for their community.”

October 8, 1973: the Milwaukee Journal warns readers about the "Lavender Panthers" movement, which was reportedly "coming soon" to the streets of Milwaukee.

Over a decade after the #BlackNiteBrawl, the city's fear of violent homosexuals was still very real. (1/) #lgbthistory pic.twitter.com/zd1qGilTzN