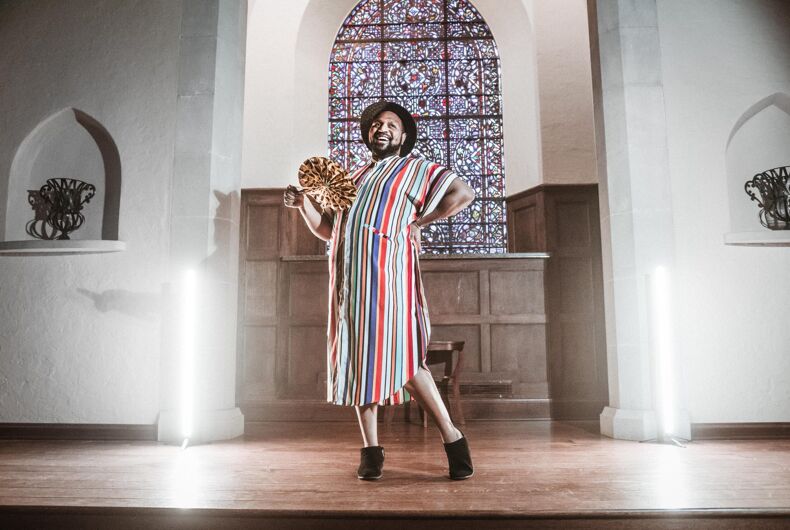 The longtime advocate has spent their life speaking out for the needs of queer people of color, and they wanted to create a space that completely centered those needs.

On October 8, Charles opened the Haus of McCoy, a community center dedicated to queer and trans middle and high school students, located in Lawrence, Kansas.

The Haus of McCoy offers a wide range of services, from affinity groups to a food pantry, hygiene kits and a gender-affirming closet swap.

Most of the programming, however, will be shaped by the youth.

Before launching, Charles hosted an open house so LGBTQ youth could visit the space and give input on what each room at the center should be used for. 60 youth showed up to the event, contributing ideas like a room for art and a room for podcasting.

“I thought it was very important to get the queer and trans youth in that space [so they would] know it’s their space and they decide what happens here,” Charles told LGBTQ Nation. “They may not have autonomy anywhere else on planet earth, but in this space, they get to decide.”

Charles also sees Haus of McCoy as a space for crucial community building and learning. While all LGBTQ youth are welcome, they emphasized that “at the core of the organization is a politic that holds Black, trans, disabled, poor, undocumented women at the center.”

Because Lawrence is a predominately white and wealthy area, they said it will be important to challenge both the youth and their parents and raise the temperature on conversations around identity and power.

Charles is well accustomed to pushing the people of Lawrence. As a columnist for the Lawrence Times, they regularly produce articles in which they fiercely advocate for queer people of color. Their most recent piece, “Dear (white) Lawrence youth,” criticized the parents of white youth for “refusing to help set [them] free” from “the grand delusions whiteness creates.”

They then challenged white youth to take unlearning the lessons of white supremacy into their own hands, to step up and have challenging conversations with their parents. They even provided specific questions to get the conversation started.

white people and whiteness will steal everything! They'll make money off of it and lessen its meaning in the same moment. white supremacy is pervasive. https://t.co/fQUGNiRt47

At the Haus of McCoy, Charles plans to have similar conversations. They also hope it is a safe place where youth can further explore who they are and who they hope to become.

Charles created the Haus of McCoy after being laid off from a university job working in the office of multicultural affairs.

“I believe that to be because I am loud with the way that I advocate for Black and Brown folks, queer and trans folks,” Charles said.

They were devastated to lose their job, but they didn’t let it quiet their fight.

While still unemployed, they were approached by a former student who said they have always admired Charles and wanted to help fund their dream project.

That project became the Haus of McCoy.

Building the organization was a whirlwind. They found a house within a month, and 6 months after that, the center opened its doors.

“If it has taken me 7 months in my Black fat trans disabled body to get this up and running, I cannot imagine the things we could be doing if we free ourselves from this white supremacist system and center community and the folks that we care about,” Charles said.

Trans people are in my family and probably in yours. Center Black queer and trans kids NOW. Invest in them and all trans kids will benefit & thrive. The time is NOW. Follow @hausofmccoy, a Black Queer community center opening in Lawrence, KS, on October 8th.
**#HausOfMccoy #Bla pic.twitter.com/c3KFxD3Zhm

The center is named to honor their late friend and fellow LGBTQ advocate, Dr. Sheltreese McCoy, who is known for creating the first Queer People of Color Resource Guide. The name is also an ode to the longstanding queer tradition of drag houses and chosen families.

“It’s in the idea that sometimes we have to make our own families to be cared for and centered and loved in the ways that we deserve to in our fullness,” Charles said.

Charles was nominated as an LGBTQ Nation hometown hero by a colleague, Anthony, who wrote, “I would not have come out if it wasn’t for people like Cody who live and model living in their fullness, and demand folks honor and love them in their fullness.”

Charles said they have spent years exploring who they are, and while they struggle to receive compliments like Anthony’s, they also see that being open and vulnerable throughout their journey has been important for others in the community to see.

They are excited to work with youth who have begun journeys of their own.