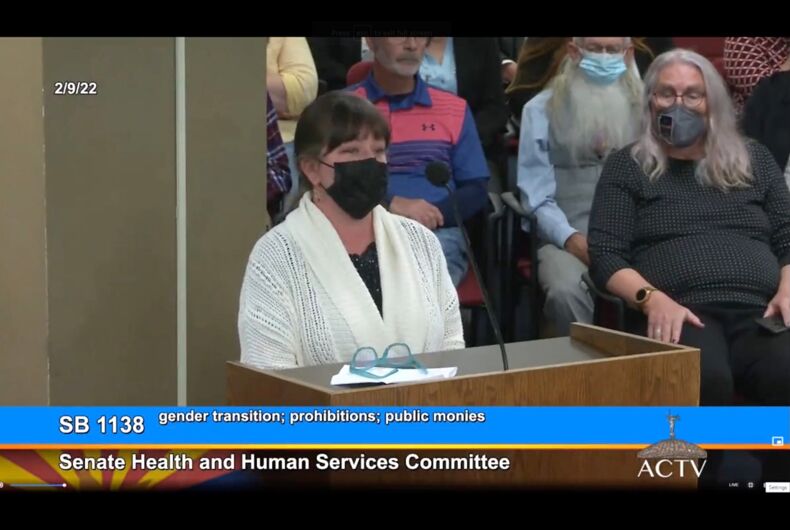 S.B. 1138 would prohibit gender-affirming care for trans youth and is one of 15 anti-LGBTQ bills Arizona lawmakers have put forth in 2022.

When it came time for the Health and Human Services Committee to vote on whether or not to advance S.B. 1138, Republican state Sen. Tyler Pace sided with three Democrats against the bill, leading to a 4-4 vote, stalling the bill in committee.

Pace attributed his decision to the powerful words of the more than a dozen people who testified before the committee against the bill.

“The testimonies we heard today about the many people who are using these avenues of medical treatments to save lives, to improve lives, I don’t want my vote to stop those great things,” he said.

Among those who testified was Skyler Morrison, a 13-year-old trans girl who declared that the bill will “most definitely increase teen suicide rates” if passed.

“Several of my friends have told me they wouldn’t be here today if it weren’t for their gender affirming medical care,” she said.

She added that going through a testosterone puberty would be “so extremely harmful to me and my mental health” and said she wouldn’t be here today either if it were not for the medical care she could access.

“I know who I am and I know who I continue to be and this bill is a direct road block in my journey to becoming fully comfortable in my own body.”

She mentioned that she, her parents, and a full team of doctors are in charge of her care, and legislators should not be. She said her entire family would be uprooted if the bill passed, as she would no longer be able to live in the state.

"I know who I am and I know who I will continue to be and this bill is a direct roadblock in my journey to becoming fully comfortable in my own body."

Thank you to Skylar for this moving testimony against #SB1138 #TransRightsAreHumanRights pic.twitter.com/LMp1nTo3y6

Skyler’s mother, Chelsa, the co-founder of a local trans advocacy group, also gave a fiery testimony, telling the legislators they have no right to play a role in her daughter’s medical care. She called them “so freakin’ mean to our kids” and declared, “You just need to stop.”

“What I would like to do is invite you to come over and have dinner. We’re a regular family, my kid is a regular girl, and she doesn’t deserve to have to hear things like this from her legislators which is literally state-sanctioned bullying.”

I am so extremely proud to be her daughter. https://t.co/7A12eJNp2L

Christina Heeley, the parent of a trans son, warned lawmakers to “not let children suffer because you do not understand gender dysphoria.”

And Abigail Jensen, legal director for the Southern Arizona Gender Alliance, spoke of her own gender-affirming care.

“The first dose of estrogen was the most effective antidepressant I took,” she said. “The only way to reduce trans distress is through gender-affirming care.”