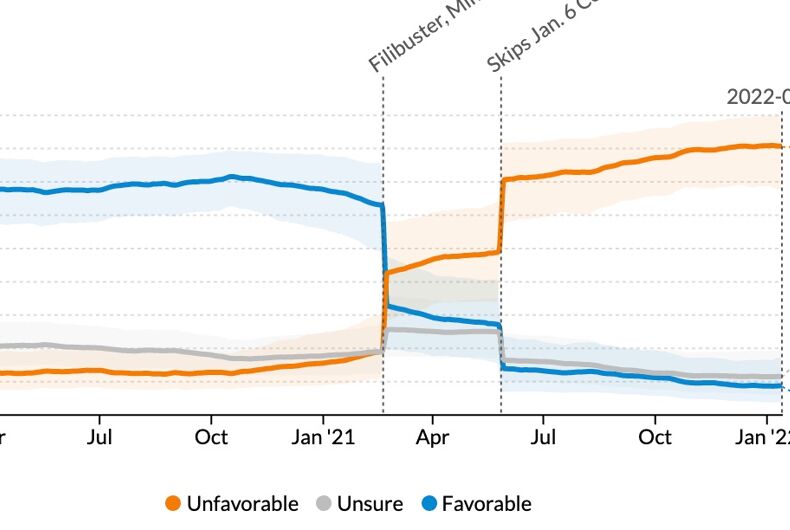 Out Sen. Kyrsten Sinema (D-AZ) has demonstrated repeatedly that she doesn’t care what members of her own party think about her. And they don’t think highly.

A poll by Civiqs shows the senator has a favorability rating of 8% with Democrats in her state of Arizona, and that poll was conducted before her choice to doom voting rights legislation last week. That latest move has earned her scorn from civil rights organizations and endorsements from former supporters.

Daily Kos reporter Kerry Eleveld shared the surprising poll numbers on Twitter and broke down the importance of Sinema’s sinking numbers and what she should expect to see soon. The tracking poll’s data stops on January 14.

Eleveld points out that Sinema’s race to the bottom has been as steady as the senator’s refusal to justify her stance in a way that makes sense to voters and supporters.  Sinema’s unfavorable ratings jumped up among Arizona registered voters when she announced she opposed nixing or changing the filibuster and when she voted against raising the minimum wage, and again when she skipped a vote to establish a commission to investigate the January 6 insurrection at the Capitol.

The drop in favorability was even larger among Arizona Democratic voters. Sinema’s antics on the Senate floor when she voted against the minimum wage cost her dearly – taking her favorability down a whopping 30 points. The numbers continued to erode steadily, and then much faster when she missed the important vote for a “personal family matter.”

But none of those episodes earned her as much scorn as her refusal to help Democrats advance legislation to protect minority groups’ right to vote last week, so her approval rating could drop even more.

Independent voters’ view of the Senator has also worsened, but not nearly as drastically as Democrats.

But Sinema did get a boost from the other party. More Republicans now have a favorable opinion of the senator than an unfavorable one. 44% approve of her work while 25% view her unfavorably.

While a bill only requires 51 votes to pass, a procedural maneuver – the filibuster – can require 60 votes to advance the bill to an actual vote. With the chamber evenly divided 50-50 between the parties, reaching 60 votes during a time of hyper-partisanship (and with Donald Trump leading the GOP by default) is almost impossible.

The senator has been widely castigated for her steadfast refusal to eliminate or change the filibuster. The maneuver is being used in Congress to block several major pieces of legislation – including landmark LGBTQ civil rights legislation.

Despite being lauded for visibility as the Senate’s only out bisexual, Sinema’s reluctance to advance legislation she says she supports – voting rights, reproductive justice, immigration and LGBTQ rights – hasn’t earned her friends in D.C. Even her normal stalwart defenders are starting to wonder why they supported her.

While Sen. Joe Manchin (D-WV) has also announced he would not support jettisoning the filibuster to allow more legislation to pass Republican obstruction, he has not earned the scorn Sinema has faced. Manchin, a conservative, has never claimed to uphold progressive ideals; Sinema, a former Green Party liberal firebrand, repeatedly mouths the right words, but doesn’t follow through with any necessary action.

Out CNN anchor Don Lemon called Sinema out as one of “the biggest hypocrites on the planet” for tweeting in honor of Martin Luther King Jr. Day while simultaneously preventing efforts to rollback Republican attempts to prevent people of color from voting.

With outrage still palpable among Democrats, Sinema can easily expect her ratings to continue to plummet among members of her own party and independent voters. But since the scuttlebutt inside the Beltway is that she plans to run for president in 2024, the question is whether or not she cares.

Sinema's favorable rating among AZ Dems at a whopping 8%, according to @Civiqs (and that was as of 1/14)https://t.co/fzsIqgbwx7 pic.twitter.com/81spZqN91N

How does ethical non-monogamy work? All your questions answered