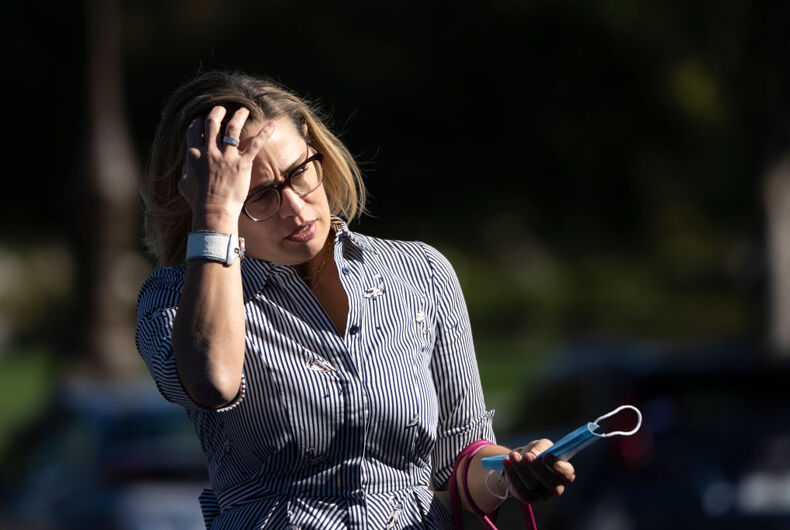 Things continue to look bleak for bisexual Sen. Kyrsten Sinema (D-AZ) as the Democratic establishment, progressive organizations and activists, the media, and her constituents turn against her. Now Emily’s List and NARAL, two stalwarts of reproductive and women’s rights, have announced that they are pulling their endorsements.

The senator has been widely castigated for her steadfast refusal to eliminate or change the filibuster, a procedural maneuver being used in Congress to block several major pieces of legislation – including landmark LGBTQ civil rights legislation. But with Sinema blockading the way forward, are LGBTQ organizations ready to take a stand? Right now it would appear the answer is a definitive “maybe.”

Despite being lauded for visibility as the Senate’s only out bisexual, Sinema’s reluctance to advance legislation she says she supports – voting rights, reproductive justice, immigration and LGBTQ rights – haven’t earned her friends in DC. Even her normal stalwart defenders are starting to wonder why they supported her.

While Sen. Joe Manchin (D-WV) has also announced he would not support jettisoning the filibuster to allow more legislation to pass Republican obstruction, he has not earned the scorn Sinema has faced. Manchin, a conservative, has never claimed to uphold progressive ideals; Sinema, a former Green Party liberal firebrand, repeatedly mouths the right words, but doesn’t follow through with any necessary action.

Out CNN anchor Don Lemon called Sinema out as one of “the biggest hypocrites on the planet” for tweeting in honor of Martin Luther King Jr. Day while simultaneously preventing efforts to rollback Republican attempts to prevent people of color from voting.

“So, we want to make it clear,” Emily’s List President Laphonza Butler said in a statement. “If Sen. Sinema can not support a path forward for the passage of this legislation, we believe she undermines the foundations of our democracy, her own path to victory and also the mission of EMILY’s List, and we will be unable to endorse her moving forward.” The national group backs Democratic women who support abortion rights.

NARAL, another large organization involved in the fight for a woman’s right to choose, also said it would not endorse any candidate who opposed changing the Senate’s rules to pass voting rights legislation.

“Right now, Sen. Sinema’s decision to reject the voices of allies, partners and constituents who believe the importance of voting rights outweighs that of an arcane process means she will find herself standing alone in the next election.”

But the Victory Fund, a bipartisan group that supports LGBTQ people running for public office, couched their words when it came to Sinema and, instead, kicked the can down the road. With Sinema not up for re-election until 2024, the group says it’s too early to decide if they’ll endorse. They endorsed Sinema in her last race when she was running against far-right Republican Martha McSally, but insist that isn’t a “current endorsement.”

“The right of candidates to compete in fair and democratic election processes is fundamental to our mission to increase the number of LGBTQ elected officials and ensure they reflect the diversity of those they serve. Voter suppression efforts deny voters the equal opportunity to elect their representatives and are a direct challenge to Victory Fund’s efforts to advance equality through representation. These laws disproportionately impact LGBTQ people of color and voters in urban areas where LGBTQ people are concentrated. The increasingly strict voter ID laws create unnecessary and sometimes insurmountable obstacles for transgender and nonbinary people attempting to access the ballot box,” Mayor Annise Parker, President & CEO of LGBTQ Victory Fund, said.

“Our Victory Fund Campaign Board – made up of more than 150 political leaders and advocates from across the country – votes to determine who Victory Fund endorses. If Senator Kyrsten Sinema runs for reelection, her record and actions on the advancement of legislation impacting the equality of LGBTQ people will be a primary consideration for whether she receives our endorsement. That board vote would take place in 2024.”

“The core of our democracy is the right to vote,” a statement from the Human Rights Campaign said. The largest LGBTQ advocacy group in the nation, HRC regularly supports candidates with financial and messaging support. JoDee Winterhof, HRC’s senior vice president of policy and political affairs, once served Sinema as her chief of staff.

“The United States Senate must act on legislation to protect that right now, including passage of federal voting rights and voting protection legislation. Without its essential safeguards guaranteeing that the voices of all voters — including LGBTQ+ Black, Brown and other minority voters — will be heard at the ballot box, we cannot ensure that any other right, even those currently enshrined in law, will be protected in the years to come.”

The group did not mention Sinema by name in its statement, but a spokesperson did note that “when making endorsements, the Human Rights Campaign considers a candidate’s positions on a number of policy areas. A candidate’s support for federal voting rights reform legislation has been and will continue to be a crucial element in HRC’s future endorsement and Congressional scorecard process for any candidate.”

The endorsement stakes might be higher than anyone realizes. The current scuttlebutt inside the Beltway is that Sinema plans to run for president in 2024 instead of seeking re-election to her Senate seat.

Editor’s Note: The story has been updated to add that the Victory Fund has not endorsed Sinema since 2018.