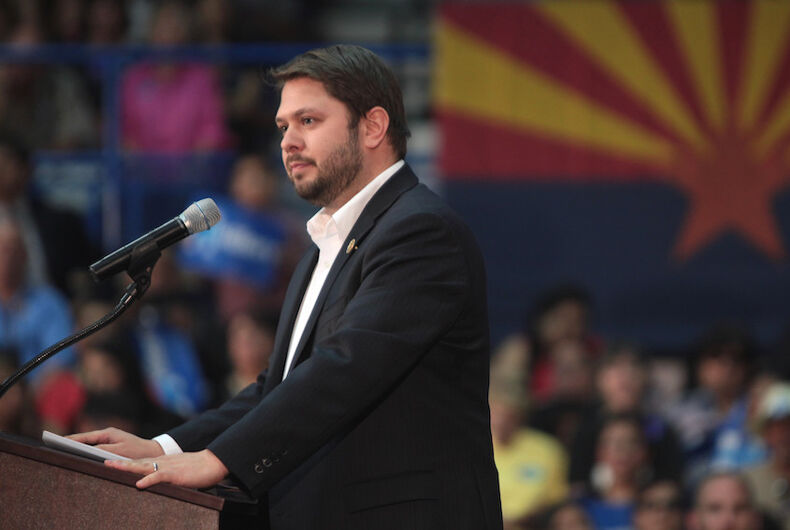 Sen. Kyrsten Sinema (D-AZ) spent Thursday plunging a metaphorical knife into President Biden’s back, even as he was on his way to Capitol Hill to meet with Senate Democrats in an attempt to salvage pro-voting rights legislation. Having betrayed her president and her party — to say nothing of the LGBTQ community — Sinema is ripe for a primary challenge when she comes up for re-election in 2024.

Infuriated Democrats in Arizona are already beginning to line up behind a replacement for Sinema. The frontrunner by far: Rep. Ruben Gallego (D-AZ).

Related: He’s known for saving the life of a Congresswoman. Now he’s running for Congress.

Gallego is hardly shying away from the challenge. Shortly after Sinema’s speech, Gallego took the House floor to deliver his own, with a not-so-veiled swipe at the senator.

“Today the House showed where it stands. We won’t shrink from protecting our democracy and the voting rights of all Americans,” Gallego said. “It’s past time for the U.S. Senate and Sen. Sinema to do the same.”

Democracy is under attack, and Congress must respond. pic.twitter.com/0gLtja6srL

Since the race is more than two years away, Gallego hasn’t officially declared his candidacy, but there’s no shortage of frustrated Democrats happy to do so for him. A Run Ruben Run draft political action committee (PAC) is raising money with the aim of getting him into the race.

Another PAC, called Primary Sinema, hasn’t picked a candidate, but has already raised a quarter of a million dollars to oust the incumbent in favor of practically anyone else.

Gallego would certainly represent a strong challenger to Sinema. A first-generation American raised by a single mother, he attended Harvard and joined the Marines after graduation. Although he could have qualified to become a desk jockey, Gallego served in the infantry, partaking in combat duty in Iraq and seeing his best friend killed in action.

His military background came in handy during the January 6 insurrection, as he instructed his colleagues in the House how to put on gas masks.

Gallego was elected to the Arizona state legislature in 2010 and quickly stood out: the Arizona Republic named him a “distinguished” freshman legislator. He also quickly established himself as an LGBTQ ally, taking the lead in the fight against a measure that would have allowed for anti-LGBTQ discrimination on religious grounds. (When he was in the military, Gallego was involved in Voices of Honor, a group pushing for repeal of Don’t Ask, Don’t Tell.)

Gallego was first elected to Congress in 2014, and he currently represents much of inner Phoenix. One of his first acts as a member was to become vice-chair of the LGBT Equality Caucus. The Human Rights Campaign has called him a “stalwart champion for the LGBTQ community.”

In Congress, Gallego has become a favorite of progressives who admired his willingness to mix it up with the opposition. While a lot of Democrats might have had the thought, only Gallego tweeted to Rep. Marjorie Taylor Greene that she should “shut your seditious, Qanon loving mouth.” When a Russian politician called for his kidnapping last month, Gallego quickly responded, “Fuck around and find out.”

Fuck around and find out. 🇺🇸 https://t.co/buuFM7GBtm

Sinema has a lot of money in her favor, largely because she is being courted by lobbyists. What she doesn’t have are poll numbers. A survey last fall found that in a head-to-head primary with Gallego, the out Senator and incumbent would get a meager 23 percent, compared to Gallego’s 62 percent. That was before Sinema’s latest betrayal and without the Congressman even announcing his candidacy yet.

But after the past week, it’s clear that Sinema is so despised by so many Arizona Democrats that a primary challenge is inevitable. If it turns out to be Gallego — as seems likely — Sinema will be in a lot of trouble.

Proud to join the King family and so many others in Phoenix today as we take a stand for voting rights. The moment is now. pic.twitter.com/GxvfhmJqRy