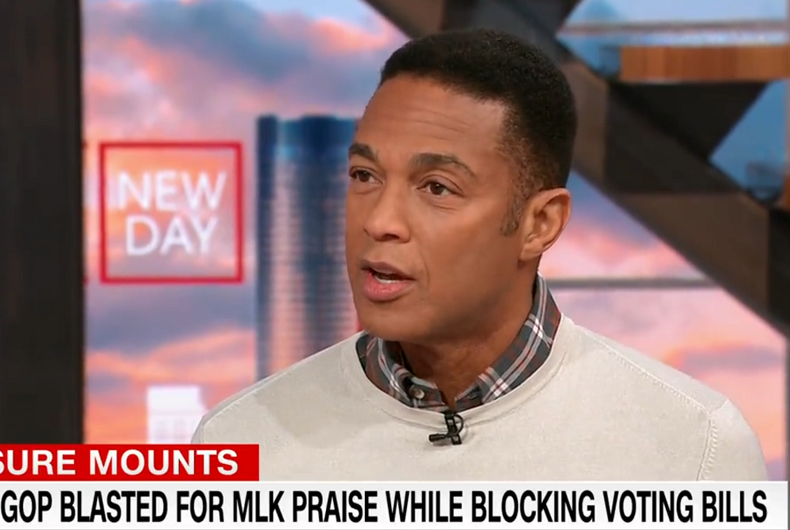 “Inevitably, you get the politicians – especially the ones in Washington now who are blocking people’s access to the voting booth – and they want to use Dr. King conveniently,” Lemon said on CNN. “They’re the biggest hypocrites on the planet.”

Currently, a voting rights bill supported by the Biden administration and most Congressional Democrats languishes in the Senate due to opposition from moderate Democrats and Republicans. The bill would limit gerrymandering, make voting easier, and tighten control of “dark money” contributions, all protections that anti-racist advocates say are necessary because of how voter restrictions and other attacks on democracy often target Black voters.

Lemon named out bisexual Sen. Kyrsten Sinema (D-AZ) because she refused to vote for an exception to the filibuster in order to pass the legislation to protect the right to vote, standing up for the internal Senate rule that requires 60 senators to support a bill for it to pass over the right to vote.

On Monday, Sinema celebrated Dr. King Day on Twitter. She was called out by The Nation‘s Elie Mystal as “the white people that Martin Luther King Jr. warned us about.”

Lemon pointed out that the filibuster is a relic of Jim Crow that has historically been used to block racial equality in the U.S., and it’s doing so again today by preventing the voting rights bill from passing.

“We evolve,” he said. “Just because there is a rule, doesn’t mean that that rule can’t change.”

Lemon quoted Dr. King’s “Letter from Birmingham Jail,” where he decried “the white moderate, who is more devoted to ‘order’ than to justice… who lives by a mythical concept of time and who constantly advises the Negro to wait for a ‘more convenient season.'”

“That sounds like… the moderates,” Lemon said before mocking moderate Democrats. “‘Not now, we can’t change the rules, because the rules are tradition, but we’re going to block people from the voting [booth].'”

Don Lemon is actually right on this one pic.twitter.com/onVaA4PcMf

Take his name out of your mouth. You are actively blocking expanding voting rights while trying to preserve the filibuster—a device used to actively block civil rights expansion by a minority.

Is Kyrsten Sinema planning to run for president in 2024?