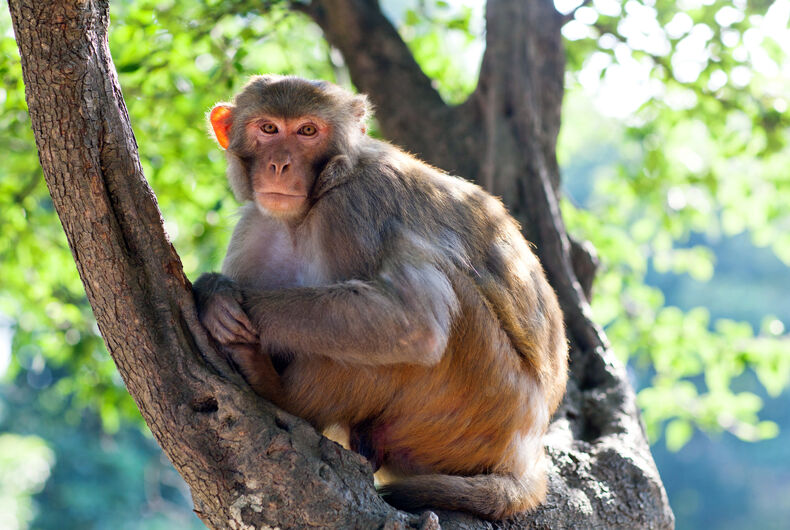 Conservatives are flipping out because Dr. Anthony Fauci’s agency funded a study that involves giving hormone therapy to monkeys. It is part of their years-long attacks on Dr. Fauci since he spoke out against former president Donald Trump’s handling of the coronavirus pandemic.

Fox News called the study “cruel research on monkeys that eighth-grader could determine was bogus.” The far-right outlet The Blaze said that the National Institute of Allergy and Infectious Diseases (NIAID, which Dr. Fauci heads) “spent more than $205,000 to give monkeys transgender hormones.” Tucker Carlson said that Dr. Fauci was “caught trying to create transgender monkeys.”

Rightwing media is following a report from the People for the Ethical Treatment of Animals (PETA), an animal rights organization that supports veganism and that rightwingers have mocked for decades as “People Eating Tasty Animals.” But now that PETA went after Dr. Fauci’s NIAID, conservatives are willing to listen.

PETA called out a study that will look into why transgender women are at heightened risk of getting HIV. While it’s a problem with numerous causes, the researchers at Scripps Research in Florida wanted to know if hormone therapy is somehow making cells more likely to get HIV.

They applied for a NIAID grant for the research that involved giving hormone therapy to rhesus macaques to test the hormones’ immunological effects. The study does not have any results yet, but its ultimate goal is to help transgender women avoid HIV.

PETA opposes almost all scientific research done on animals, and this past Monday their website published an article calling the study “absurd.”

“Did you make this up?” Tucker Carlson asked PETA Vice President Kathy Guillermo on his show this week about the monkey study.

“It sounds like it, doesn’t it? I mean, it’s an experiment that an eighth-grade science student could figure out is totally meaningless,” she responded. “But no, unfortunately, we did not.”

“I think it says you’re not a very good human being,” she said, referring to Dr. Fauci.

“I think that’s true,” Carlson responded. “It’s so awful that I almost don’t want to know more about it, but I appreciate what you’ve told us tonight.”

Carlson did not have an actual researcher on his show to talk about the study or to explain why it might be necessary, nor did he discuss what could be done to address HIV transmission among transgender women.

Instead, he showed a graphic that said “APE-SOLUTELY CRUEL” just below Dr. Fauci’s image.

Rightwingers have been attacking Dr. Fauci constantly because, in 2021, he was critical of the Trump administration’s handling of the COVID-19 pandemic and he has been a steadfast supporter of masking, social distancing, and vaccines, all measures conservatives are currently organizing against.

The narrative they’ve built against him is that he is a cruel scientist who funds research just to watch others suffer. Rep. Lauren Boebert (R-CO) accused Dr. Fauci of funding research that involved “insects eating dogs’ faces off,” even though the study wasn’t funded by NIAID or the National Institute of Health (NIH) and didn’t involve dogs being eaten alive.

Rep. Marjorie Taylor Greene (R-GA) told supporters that Dr. Fauci funded the creation of COVID-19 so that he could watch people die.

“He funded COVID-19!” she said last August. “That is his baby. That is his experiment. And he’s getting to watch it in the real world like a live television show. He has the front-row seat.”

What should trans people do to change the name on their COVID vaccination card?