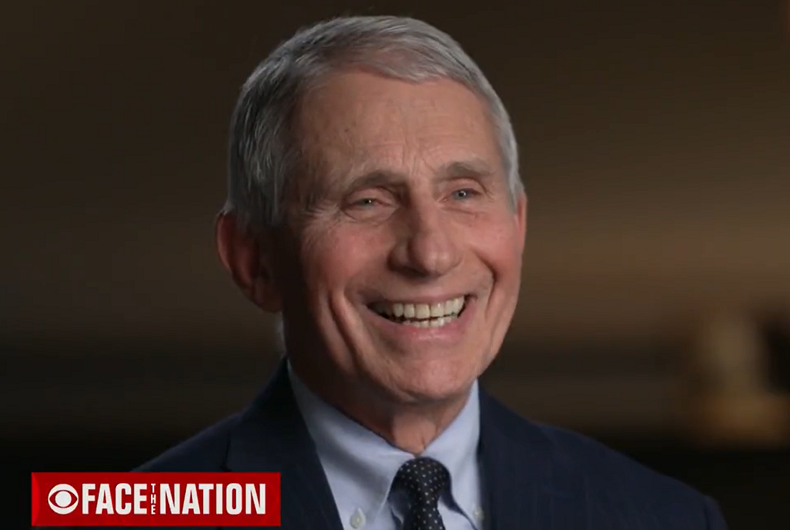 Dr. Anthony Fauci, director of the National Institute of Allergy and Infectious Diseases, had the best clapback to Sen. Ted Cruz’s (R-TX) call for him to be prosecuted.

“I should be prosecuted?” Fauci told CBS’s Margaret Brennan yesterday, laughing. “What happened on January 6, senator?”

“I’m just gonna do my job,” he said when Brennan asked him about all the attacks he’s facing from Republican elected officials. “And I’m gonna be saving lives. And they’re gonna be lying.”

Fauci is one of the leading experts on infectious diseases in the U.S., who helped lead researchers in the fight against the AIDS crisis in the 1980s and now against the COVID-19 pandemic. He serves as chief medical advisor to the president.

He has become a lightning rod for criticism from the right ever since he criticized the Trump administration for not implementing measures to prevent the spread of the pandemic in April 2020. Fauci has promoted social distancing, mask-wearing, and vaccination over the last two years, measures that many conservatives oppose.

Republican elected officials have painted Fauci as an evil person, claiming that COVID-19 is “his experiment” so that he can “watch it in the real world like a live television show,” killing millions of people worldwide.

Other Republicans have said that Fauci kills puppies and promoted research that involved “scalping aborted babies and fusing their skin to lab rats.”

Sen. Cruz asked Attorney General Merrick Garland in October to investigate Fauci, who he claimed lied to Congress when he said that he had not funded research to make COVID-19 more deadly.

Fauci, on CBS, fired back by pointing out the role that Cruz may have played in the January 6 Capitol insurrection, where Trump supporters stormed Congress while chanting “Hang Mike Pence” in order to overturn the 2020 elections. Cruz helped promote conspiracy theories that the election was stolen by President Joe Biden and even called for an “emergency audit” of the election just two days before the insurrection and told voters that Democrats steal elections that same week.

Brennan suggested that Fauci was made into a scapegoat for Donald Trump’s failures in addressing the epidemic, and he said, “Of course! You’d have to be asleep not to figure that one out.”

“All I want to do is save people’s lives,” he continued. “Anyone who looks at this carefully realizes that there’s a distinct anti-science flavor to this.”

“But they’re really criticizing science, because I represent science,” he said. “That’s dangerous. To me, that’s more dangerous than the slings and the arrows that get thrown at me.”

And on Republicans scapegoating him: "That's okay. I'm just gonna do my job, and I'm gonna be saving lives, and they're gonna be lying." pic.twitter.com/fJm1Hh8lSJ

Cruz responded on Twitter, calling Fauci “an unelected technocrat” and “smug,” saying that Fauci wants “authoritarian control over millions of Americans.” Cruz stood by his accusation that Fauci funded “gain of function” research in Wuhan.

Fauci is an unelected technocrat who has distorted science and facts in order to exercise authoritarian control over millions of Americans.

He lives in a liberal world where his smug “I REPRESENT science” attitude is praised.

Here are the facts:

The Washington Post rated Cruz’s claim that the National Institute of Health admitted that Fauci funded gain of function research in Wuhan “two Pinocchios.” The research that Cruz was referring to was also not performed on the same coronavirus that is behind the current pandemic.

Cruz did not respond to Fauci’s statement that he should face prosecution for helping promote the Capitol Insurrection.

Earlier this month, Cruz picked a fight with Sesame Street’s Big Bird for getting vaccinated and then tweeting about it. Cruz said that the fictional bird was producing “government propaganda… for your 5 year old!”