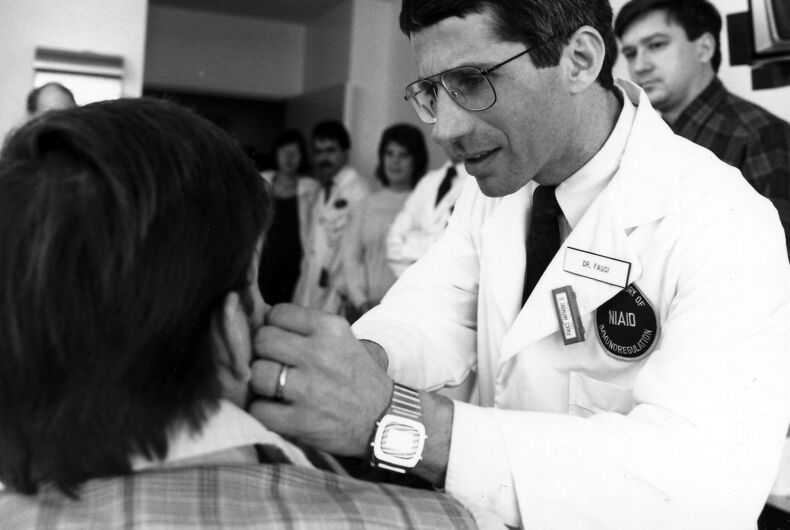 Dr. Anthony Fauci has served as the director of the National Institute of Allergy and Infectious Diseases (NIAID) since 1984, and now is the Chief Medical Adviser to the President. He’s been at the helm of America’s medical response efforts since the height of the HIV/AIDS epidemic and continued on as another deadly viral pandemic took hold.

He’s talked about the comparisons and contrasts between both AIDS and COVID-19 before, but now he’s revealed that he had to visit gay bars and bathhouses at the height of the HIV/AIDS epidemic to see how it was decimating the LGBTQ community.

In a sit-down with NPR‘s Terry Gross for the Fresh Air podcast, Dr. Fauci talked in-depth about his handling of both HIV and the coronavirus during his tenure from the 1980s to today. He reasoned that seeing the saunas and clubs with his own eyes helped him become a better immunologist.

“This was the very, very early years of the outbreak,” he began. “We were seeing these large numbers of mostly gay men who were formerly otherwise well, who were being devastated by this terrible, mysterious disease. And it was so concentrated in the gay community that I really wanted to get a feel for what was going on there that would lead to this explosion of a sexually transmitted disease.”

“So I did. I went to the Castro District [of San Francisco]. I went down to Greenwich Village and I went into the bathhouses to essentially see what was going on.”

There, Dr. Fauci said he found the “insight” he needed to start properly combatting the epidemic.

“I went into the bathhouses to essentially see what was going on, and the epidemiologist in me went, ‘Oh my goodness, this is a perfect setup for an explosion of a sexually transmitted disease.’ And the same thing going to the gay bars and seeing what was going on, and it gave me a great insight into the explosiveness of the outbreak of the sexually transmitted disease.”

Gross asked Dr. Fauci if the President at the time, Republican Ronald Reagan, made his job harder. “Reagan was supported by the religious right that had a very anti-gay agenda,” Gross noted, “and that was kind of very central to their political agenda. Do you think that that interfered with the kind of funding you needed for research into AIDS?”

“You know, I think it did to some extent,” Dr. Fauci answered, although, he said, “I think that the president himself did not inherently feel that way.”

Dr. Fauci added, “I believe, because of a large part of his constituency was that way, what he did not do is he did not use the bully pulpit of the presidency to gain support and attention to what was going on right in front of everyone’s eyes.”

Gross then began asking Dr. Fauci about becoming the target of queer HIV/AIDS activists, and similarly so when the coronavirus pandemic began in 2020.

Recounting a time he went to “the middle of Greenwich Village to meet with what must have been, you know, anywhere from 50 to 100 activists in this meeting room” essentially on his own, Dr. Fauci adds, “not for a second did I feel physically threatened to go down there, not even close. I mean, that’s not the nature of what the protest was. One of the things about it was that not only were they not threatening at all in a violent way, but, ultimately, they were on the right side of history.”

He specifically mentioned Larry Kramer’s famed op-ed calling him “a murderer” for not heeding to the LGBTQ community’s concerns at the time.

Dr. Fauci expressed that he learned two major things from dealing with the AIDS epidemic: “One of them is the importance of getting the community involved and dealing with the community and their special needs…if you look at the incidence of infection and the incidence of serious disease, including hospitalization and deaths, brown and Black people suffer disproportionately more than whites.

“We also learned the importance of fundamental basic science in getting solutions,” he explained. “Back in the early days, getting infected with HIV was a virtual death sentence for the overwhelming majority… it was the fundamental basic science of targeted drug development that allowed us to develop combinations of drugs… that ultimately completely transformed the lives of people living with HIV.”

A teenager beat a man so badly the victim didn’t want to be gay. The judge set him free.