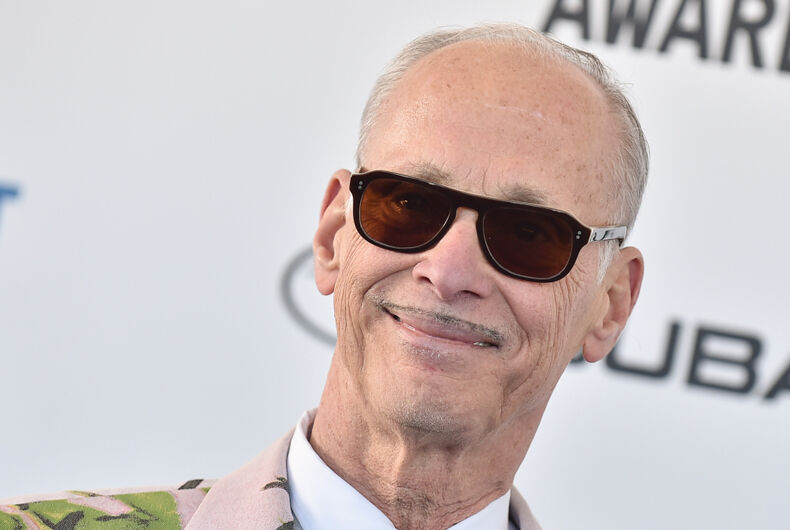 Want a date with John Waters? With dinner and drinks and maybe some bawdy tales of lurid sex acts?

Well, you’re in luck because the man behind Pink Flamingos, Multiple Maniacs and Female Trouble is up for auction, and he has a one-of-a-kind treat for the winning bidders.

Related: John Waters gave his collection to the Baltimore Museum of Art. They named the toilets after him.

The Provincetown Film Society, the organizer of the annual Provincetown International Film Festival (PIFF) and other activities, is offering a date with John Waters in Provincetown this summer as one of the big items in its online winter auction, which went live on January 29 and ends on Sunday, February 7.

And here’s the risqué part: In addition to dinner, drinks and a signed copy of his latest book, Waters promises to take 10 successful bidders on the “John Waters Dick Dock Tour,” a guided excursion to see Ptown’s notorious sex haunts, including the waterfront cruising spot known as Dick Dock.

Here’s how the film society describes the auction item:

“Join legendary writer and director John Waters on a tour of Provincetown’s past and public sex spots. Hear the stories and visit the sites. After the tour, join John for martinis and dinner at Bubala’s By the Bay.” Note: “Must be 21 or older to bid on this item.”

The auction is a fundraiser for the film society, a nonprofit arts organization that produces the annual Provincetown International Film Festival (PIFF) and other activities. It’s a strong advocate for gender, racial, and LGBTQ representation in film, and provides programming designed to allow a wide range of voices to be heard.

Waters has been an ardent supporter of the society since it was founded. Every year he presents its Filmmaker on the Edge award and interviews the winner on stage during the film festival. Last summer, with coronavirus restrictions in place, he presented a double feature, Night of the Lepus and Kitten With a Whip, at the Wellfleet Drive-In on Cape Cod.

The virtual auction will help support the society’s mission and programs at a time when it hasn’t been able to count on its usual funding sources said board member Julia King, in a video about the event.

“Since our cinema’s been closed since March and we didn’t have an in-person film festival this year…we decided to really dig deep and find tons of really fun Ptown auction items,” she said. “We really tried to make the auction items range from really small, fun souvenirs to expensive experiences that are very special.”

Though based in Baltimore, Waters started going to Provincetown in 1964 and has spent every summer there since then. This will be his 58thyear in the town, which has become a popular destination for LGBTQ vacationers. That’s plenty of time to bone up on those sex spots.

Dick Dock is the name for an outdoor area off Commercial Street in Provincetown, in the vicinity of the Boatslip Resort, near the center of town. For years, it has been a not-so-secret place where gay, bisexual, and curious men can meet for sex after dark.

In a 2017 video for Huffington Post, long before the COVID-19 pandemic, tantric sex coach Brad Amberheart called it “one of the most frequented and sanctioned gay cruising areas in the world.” (It even has its own Facebook page and, yes, its own Bernie Sanders meme.)

In a phone interview this week, Waters declined to give the exact location of Dick Dock, saying he doesn’t want to have an address published and cause trouble for neighboring property owners or anyone who goes there. But he notes that information about it is readily available.

“You can go online and find out where it is.”

Waters said the auction committee approached him about making a donation but left it up to him to decide exactly what. He said he thought of leading a tour of local sex spots and then having cocktails and dinner because he wanted his contribution to be more memorable than just having dinner or providing something others might offer.

“I came up with the idea and they went for it immediately,” he said. “I wanted it to be something in the spirit of me.”

Waters, 74, said this is the first time he’s done a sex tour such as this, and he has it all planned out. He said he supports multiple film festivals and has donated auction items before but has never contributed anything that’s so “involved.” He said he knows this auction is “bigger and more important” for the film society “because they don’t have all the income they had” before the pandemic.

“I didn’t want to do some boring thing,” he said. “I just thought it would be funny and I think it will be funny. It’s a secret location. It’s only 10 people. I’m going to take them to all the sex spots in Provincetown that are no longer, and the Dick Dock, which everybody knows about in Provincetown.”

Can he share any hints about the other places they’ll visit?

“I’m not telling you where I’m taking them,” he said. “That’s for the people who pay to come. It’s the other sex spots that have been in Provincetown, long-gone sex spots over the years. Anybody who lives in Provincetown could guess what they were. They’re pretty obvious.”

“This is John Waters leading a tour of the Dick Dock in Provincetown and then all of the sexual exploits and the history of Provincetown,” she said during an online auction preview.

“It is deep and it is involved and it is a lot of fun. And then moving on to dinner with him at Bubala’s to hang out and have drinks and talk about all of it. It’s a piece of Provincetown history, and John Waters has been such a huge part of our organization and a huge support to us, so I think it’s going to be one of our most talked-about items that we offer in this auction and for many years to come.”

According to film festival treasurer Gabrielle Hanna, there will be 10 winning bidders, because there are three groups of two up for bid and four single slots up for bid. All of the winners will go on the same tour and have dinner with Waters at the same time.

According to the auction listing, the tour and dinner will take place on a secret day and time in July. Hanna said the exact day will be chosen once the winners are identified and contacted, so people can coordinate their schedules and make travel plans if necessary. She said it will be in on a “mutually agreeable day.”

July works out because Waters will be in Provincetown then. It’s also high season for the town, a time when weather is good and beaches are inviting.

The tour is expected to take about an hour, a van will transport participants from place to place, and dinner will follow. All of the “sex spots,” about five or so, are outdoors, and Dick Dock will be the finale.

Dinner, drinks, and a signed copy of Waters’ Mr. Know-It-All: The Tarnished Wisdom of a Filth Elder (with two Ptown-centric chapters) are included.  Participants are expected to follow all public health protocols to prevent the spread of COVID-19.

Hanna said the film society hopes to raise more than $10,000 with this item, which she promises will be a “once in a lifetime experience” for the winners.

For John Waters fans who don’t get a spot on the sex tour, other Waters-related items in the auction include a poster for A Dirty Shame and a poster that Waters designed for the 2020 New York Film Festival. For Tab Hunter and Divine fans, there’s an original poster for Lust in the Dust.

The Provincetown Film Society Winter Auction includes more than 160 items in 18 categories in all.

Other noteworthy items are:

Dr. Fauci talks about his visits to gay bars & bathhouses (for scientific reasons)