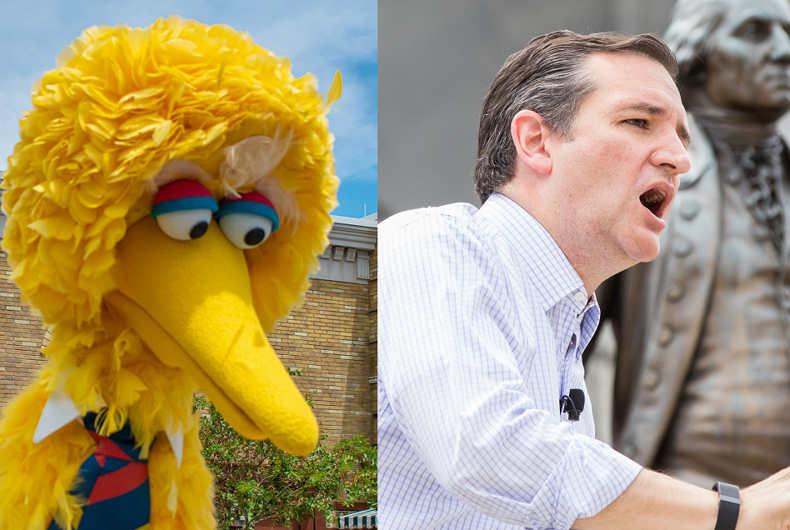 It started with an innocuous tweet from one of Sesame Street’s most famous residents over the weekend, aimed at encouraging kids to get vaccinated as the Centers for Disease Control and Prevention (CDC) just recommended a pediatric version of the Pfizer vaccine for five- to 11-year-olds.

“I got the COVID-19 vaccine today!” Big Bird wrote. “My wing is feeling a little sore, but it’ll give my body an extra protective boost that keeps me and others healthy.”

It probably didn’t seem controversial when they posted it – who wouldn’t want to keep children healthy? – but Sen. Cruz was outraged, calling the tweet “government propaganda… for your 5 year old!”

President Joe Biden, on the other hand, supported Big Bird, “Good on ya, Big Bird. Getting vaccinated is the best way to keep your whole neighborhood safe.”

Good on ya, @BigBird. Getting vaccinated is the best way to keep your whole neighborhood safe.

Cruz was widely mocked online. In response, he did what any mature adult fighting with a fictional bird about whether kids should get diseases does: he doubled down.

“Big Bird coming over to vaccinate your kids,” he tweeted with a gif of Big Bird kicking down a door.

Big Bird coming over to vaccinate your kids. pic.twitter.com/LQODCO3GKg

Cruz retweeted a meme that mocked Biden for supporting vaccines. The meme implied that Biden should instead be taking medical advice from conservative podcaster Joe Rogan, who made headlines earlier this year for his anti-vaccine statements. 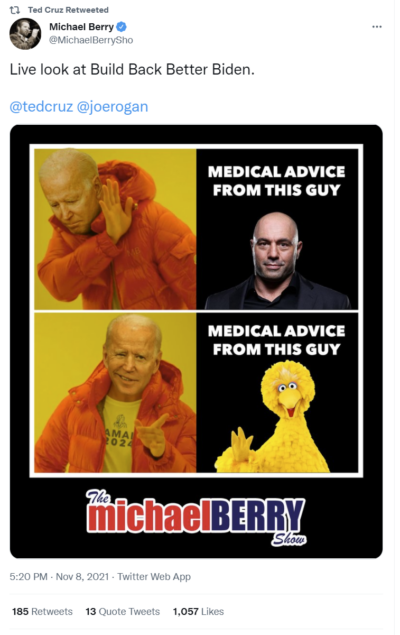 Seth McFarlane, the creator of Family Guy, mocked Cruz: “No surprise Big Bird is smarter than Ted Cruz. So is Kermit, Ernie, Bert….”

“Well, every one of those is a puppet, most with a hand inserted up their backside,” Cruz fired back, accusing McFarlane of “shilling for petty authoritarians” by supporting vaccines.

Well, every one of those is a puppet, most with a hand inserted up their backside.@SethMacFarlane is 1 of the funniest souls on the planet. Am sorry to see him shilling for petty authoritarians who would deny you the right to make your own medical choices.#YourBodyYourChoice https://t.co/iJn0PjQQE8

Cruz shared an article that implied that it’s actually liberals who were “triggered” by Big Bird, even though the entire discussion started when Cruz responded to a Big Bird tweet. 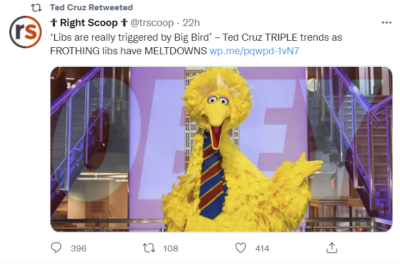 Cruz called Big Bird’s original tweet “government propaganda,” which was probably a reference to how Sesame Workshop, the nonprofit organization that produces Sesame Street, gets about four percent of its revenue from the U.S. government.

“Unlike Ted Cruz, I won’t fly away to Cancun when Texas is in trouble,” the account tweeted, referring to Cruz’s trip to Mexico earlier this year as Texas suffered power outages during a winter storm.

Unlike Ted Cruz, I won’t fly away to Cancun when Texas is in trouble.

“I am so proud to support a candidate who promotes science, kindness and empathy.”

Hi friends, I'm the Cookie Monster. Much has been said about @SenatorBigBird, and I'm his campaign manager.

I am so proud to support a candidate who promotes science, kindness and empathy.

We want to get to 1,000 followers ASAP. Can you retweet and follow to amplify our message

Others on Twitter discussed an old video of Big Bird promoting the measles vaccine for kids in 1972, so the official Sesame Street account shared the original clip.

Big Bird may have just received his COVID-19 vaccine, but as many of you pointed out, he was learning how to keep himself and his neighbors healthy long before that! Watch as Dr. Marzullo teaches @BigBird about vaccines and administers his measles shot back in 1972. pic.twitter.com/voDs8x5vvt

While people had fun with Cruz on social media, he’s dead serious about preventing children with bad parents from getting vaccinated. He filed a bill in the Senate to prohibit school districts from requiring a COVID-19 vaccination, even though schools already require many other vaccines for children.

The bill itself would only apply to the vaccines for COVID-19, but Cruz’s reasoning works for pretty much any vaccine: “Parents should have the right to decide what is best for their children in consultation with their family doctor.”

COVID-19 is spreading among children, with over six million cases of COVID-19 among children since the beginning of the pandemic in the U.S. The CDC says that 41 children have died of COVID-19 from September 4 to October 2 alone.

The FDA found that the Pfizer pediatric vaccine is 91% effective at preventing COVID-19 in children and did not have any major side effects.