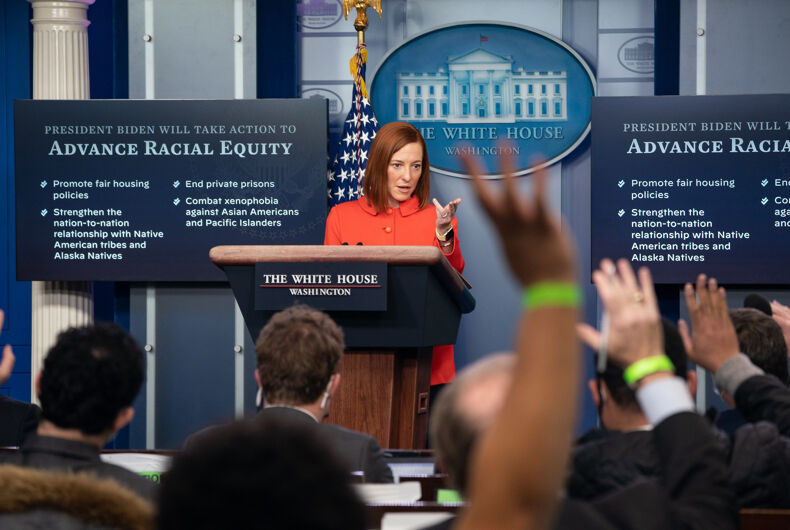 Two bills currently sit in the Senate awaiting action, but are unable to cross the 60 votes necessary to take a vote on the issue. Republicans are filibustering the legislation and Biden’s speech pointed out that they were the roadblock.

Biden compared current attempts by Republicans across the nation to restrict voting rights – and blatantly admitting they were doing it to suppress votes from minority groups – to the Civil War era and the Reconstruction period that followed.

Biden demanded that lawmakers choose whether they will “be on the side of Abraham Lincoln or Jefferson Davis,” the two men who led America and the Confederacy during the Civil War.

“Look, I’ve known, liked and personally respected Joe Biden for many years. I did not recognize the man at the podium yesterday,” Senate Minority Leader Mitch McConnell (R-KY) said on the Senate floor during a speech. “The president’s rant, rant, yesterday was incoherent, incorrect and beneath his office.”

“Yesterday, with the world’s largest megaphone, he invoked the literal Civil War and said we are on the doorstep of autocracy. Talked about domestic enemies. Rhetoric unbecoming of a president of the United States.”

“I know there has been a lot of claims of the offensive nature of the speech yesterday, which is hilarious on many levels, given how many people sat silently over the last four years for the former president,” Psaki told reporters.

“I would note that in our view and the president’s view what is far more offensive is the effort to suppress peoples’ basic right to exercise who they want to support and who they want to elect. That’s not a partisan thing, and that was why he gave such a strong speech yesterday,” she continued.

“I think it clearly struck a nerve, the president’s speech yesterday and the vice president’s remarks. I think there’s evidence of that. But to us and to the president what is irresponsible, unbecoming and divisive is the coordinated effort by far too many Republicans across the country to perpetuate the ‘big lie’ and make it more difficult to vote.”

Biden called for the filibuster to be removed in order to pass the critical bills, but out Sen. Kyrsten Sinema (D-AZ) and Sen. Joe Manchin (D-WV) have refused to entertain the idea of relegating the Civil War-era procedural maneuver to the dustbin of history. It has primarily been used to prevent the passage of civil rights legislation and is currently being used to also block landmark LGBTQ civil rights legislation: the Equality Act.

Psaki: I know there has been a lot of claim of the “offensive nature” of the speech yesterday which is hilarious on many levels given how many people sat silently over the last four years for the former President… pic.twitter.com/NJwVOxkvYf

Conservatives are flipping out over a study “to create transgender monkeys”