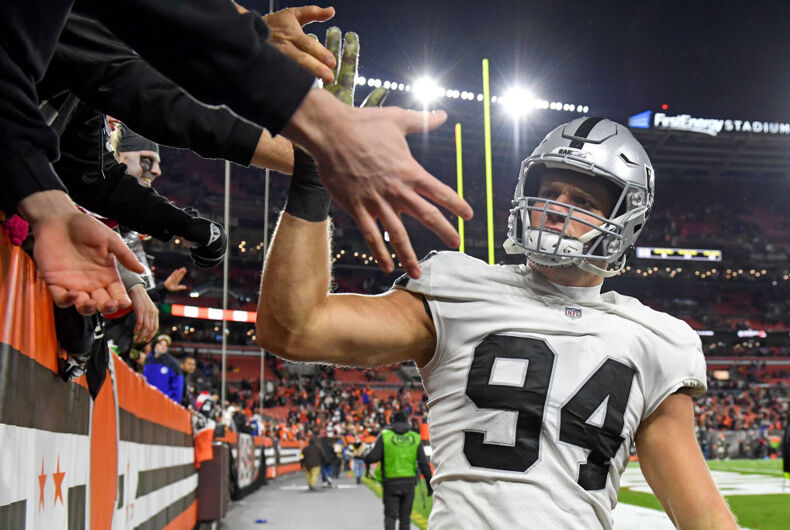 Las Vegas Raiders defensive end Carl Nassib is active for today’s Wild Card Playoff Game against the Cincinnati Bengals, making him the first NFL player to participate in a playoff game after coming out, and the first out player on an active NFL playoff game roster.

The Raiders take on the Bengals today at 4:30 pm EST at Paul Brown Stadium in Cincinnati, airing on NBC and streaming via Peacock.

Nassib’s ability to play wasn’t guaranteed, especially following his time in COVID-19 protocols. However, he did not appear on the Raiders’ injury report at all this week, and participated fully in practice. He was not on the inactives list released by NFL teams 90 minutes before games begin.

Carl Nassib gets the nod over Malcolm Koonce https://t.co/689eUJNbgK

The Raiders, with a record of 10-7, made the playoffs by securing a Wild Card spot with an overtime victory over the Los Angeles Chargers, 35 to 32. If they beat the Bengals, who are also 10-7, they will remain in the playoffs and face another team in the Divisional Round next week, and continue to fight for a chance to play in the Super Bowl next month. If they lose, they will be eliminated and their season will end.

Before the game, Ryan K. Russell, another NFL veteran who came out in 2019, wrote in an editorial for the Guardian, “Counter to what some have claimed for years, Carl Nassib proves that coming out is not a distraction to a team or the game but that you can win big when your team can accept and support its players. Now not only will LGBTQ+ athletes, fans, and individuals be able to see themselves represented on Sundays when the Raiders are playing on their local channel but on a national stage in the NFL playoffs.

“Regardless of the outcome for the Raiders during wild card weekend, it’s essential to document this moment in history, one that is a first in all the years the game has been played,” Russell concluded.

Nassib has made sports history for the last several months, starting when he came out as gay in a June 21, 2021, Instagram post, making him the first NFL player to do so while active.

In his post, Nassib included a video and several screenshots of notes from his phone, explaining his decision to share the news.

He then became the first out NFL player to get a spot on a team’s NFL roster, and then the first out player to compete in a regular season game. During that game, the defensive end also made one of the most vital plays of the night, helping to seal a victory for his team on top of making history.

In 13 games this season, Nassib has gotten 1.5 sacks, 16 tackles (3 for loss), and 1 forced fumble. He has missed four games and been limited in others due to a knee injury and time away under COVID-19 protocols.

In October, on the “Comeback Stories” podcast with his teammate Darren Waller, Nassib revealed he had met “an awesome guy.” Shortly thereafter, he went public with his relationship to Erik Gudzinas starting with an Instagram post in November.

In the middle of the season, the New York Times and Wall Street Journal reviewed emails collected during an investigation into Washington Football Team owner Dan Snyder, which revealed that Jon Gruden, who became the Raiders’ head coach in 2019, had used homophobic slurs and made sexist, racist, and anti-gay remarks over years of exchanges with other executives and front office staff members around the NFL. Gruden was subsequently fired, but has begun legal proceedings against the NFL over his termination and the release of the emails.

In December, Nassib chose to support the Trevor Project again by selecting them as his cause under the NFL’s “My Cleets, My Cause” initiative.

Is Ruben Gallego the perfect challenger to send Kyrsten Sinema packing from the Senate?