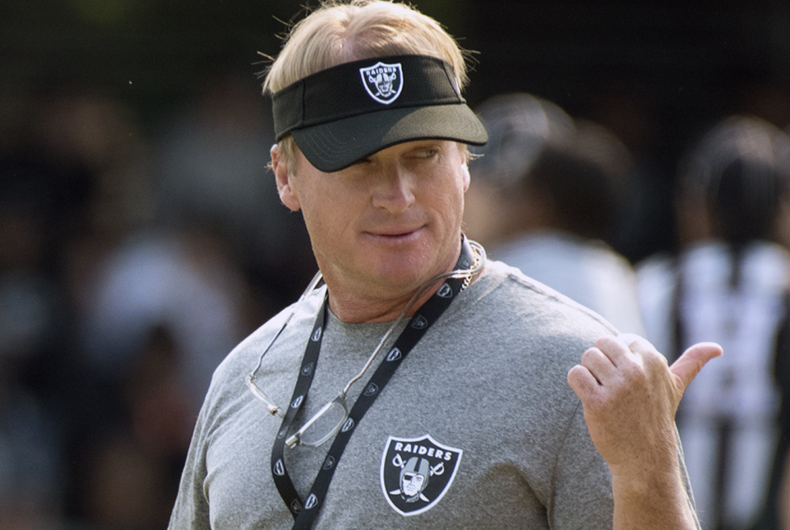 Jon Gruden, former head coach of the Las Vegas Raiders, is suing the NFL for allegedly leaking his emails. The emails showed him using homophobic, transphobic, sexist, and racist language, and he resigned shortly after they were made public.

The 21-page court filing against both the NFL and the league’s commissioner, Roger Goodell, alleges that the leaked emails were part of a “malicious and orchestrated campaign” that “sought to destroy the career and reputation of Jon Gruden.”

The lawsuit refers to the defendants’ treatment of Gruden as “a Soviet-style character assassination,” alleging that Gruden had no warning that the emails had been discovered and that there was no formal process for investigating them.

“Defendants held the emails for months until they were leaked to the national media in the middle of the Raiders’ season in order to cause maximum damage to Gruden,” the lawsuit states, also saying that Gruden “seeks the recovery of money in excess of $15,000.00.”

The emails in question were discovered during an investigation into sexual abuse allegations on the Washington Football Team.

The lawsuit alleges that 650,000 emails were collected as part of this investigation and says the only ones that were released to the public were Gruden’s.

“Out of 650,000 emails obtained months earlier in connection with the investigation into workplace misconduct by the Washington Football Team, Defendants weaponized a small subset that were authored by Gruden prior to his hiring by the Raiders,” it said.

“Defendants then purposefully leveraged these emails to cause the termination of Gruden’s coaching contract, endorsements, and sponsorships.”

In the emails, which were obtained by the Wall Street Journal and New York Times, Gruden referred to Goodell as a “faggot” and a “clueless anti football pussy.” He complained about how the St. Louis Rams drafted “queers” like Michael Sam, the first out gay player in the NFL.

The emails came from throughout the last decade and are as recent as 2018. He directed much of his ire to Goodell for trying to reduce concussions in the NFL.

He also criticized football player Eric Reid, who kneeled during the national anthem to protest systemic racism and police violence against Black people, and said that Reid should be fired.

Gruden used homophobic insults to describe several people he disagreed with, including Goodell and NFL team owners, other coaches, and even journalists.

He also used racist insults, like saying that NFL Players’ Association Executive Director DeMaurice Smith, who is Black, “has lips the size of michellin tires” in a 2011 email.

Gruden told the Wall Street Journal that he did not recall that email, and he said he sometimes describes people as having “rubber lips” if he thinks they’re lying.

At the time the emails were leaked, Gruden was the coach of Carl Nassib, who this year became the first active NFL player to come out, and the first out NFL player to play in a regular season game for the Raiders.

“I learned a long time ago what makes a man different is what makes him great,” he said at the time.