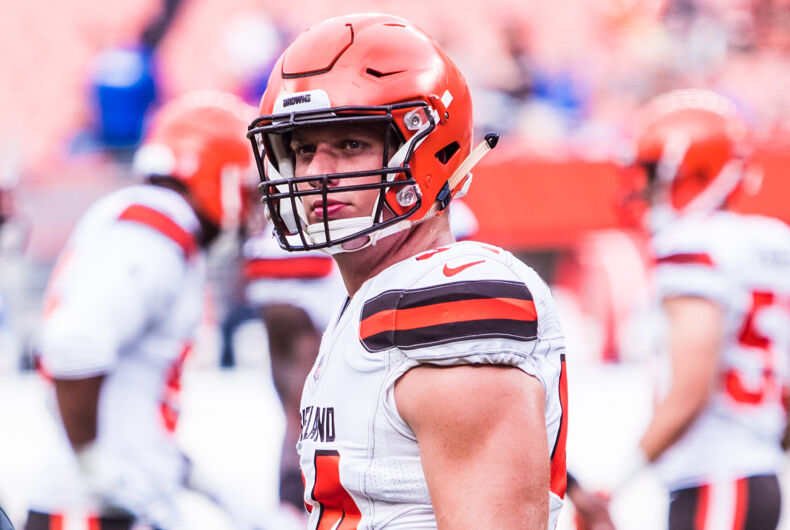 Defensive lineman Carl Nassib is the first out NFL player to get a spot on a team’s NFL roster. The Las Vegas Raiders, the team he has played on since last year, announced their finalized roster this week and he was on it.

This means that Nassib will also be the first out professional football player to participate in a regular season game on Monday Night Football on September 13.

Related: Out NFL player Carl Nassib breaks his silence weeks after coming out

Nassib made sports history when he came out as gay in a June 21 Instagram post, making him the first active NFL player to do so.

He acknowledged that his life is great – “I have the best life, I have the best family, friends and job a guy can ask for” – but also seemed weary of criticism that he was coming out just to get attention.

“I’m a pretty private person so I hope you guys know that I’m really not doing this for attention,” he said in the video. “I just think that representation and visibility are so important.”

He added that he was donating $100,000 to the Trevor Project, which fights LGBTQ youth suicide.

Nassib didn’t speak much about his identity after that announcement, although he thanked fans for their support at an August press conference.

“I was definitely surprised by the big reaction. It was incredible,” he said. “I thought nobody would care. But it was such a good feeling to have all the support. I was glad I could do my part to help bring visibility and representation to my community.”

“I’ve got a great locker room, great teammates,” he stressed. “I’ve been met with nothing but love and support. It’s been incredible… Football players get a bad rap, but we’re humble, hard-working, accepting people, and this was a great example of that, definitely.”

While he is publicly saying that he hasn’t had problems with fellow football players, the fact that he is the first active player to ever come out speaks volumes about homophobia in the sport.

Only 15 other NFL players have ever come out, but none of them were on an active team roster. The list includes Ryan Russell, who came out as bi after the Buffalo Bills released him from his contract; Michael Sam, who was cut from the Rams’ roster in their final preseason cut; and Raider-turned-Bachelor Colton Underwood, who was on the team’s practice squad and released years before he appeared on reality TV or came out.

The sports website OutSports says that they were aware of several NFL players who were LGBTQ but didn’t come out even after they retired.