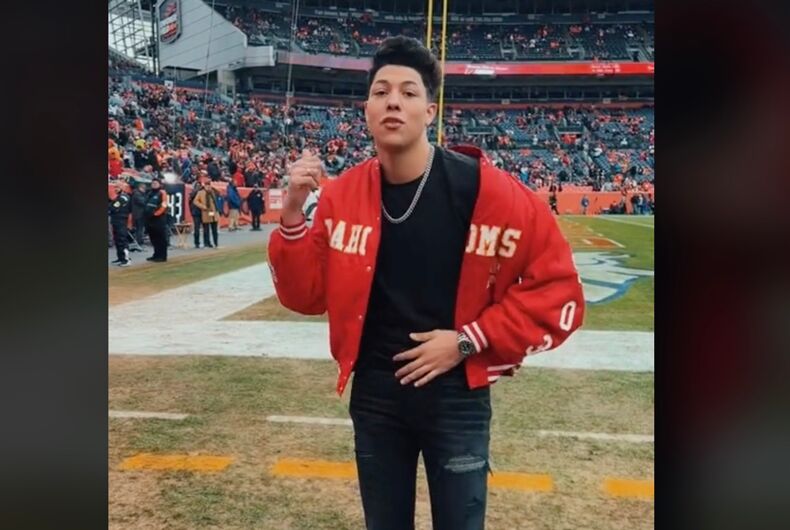 At a recent NFL game, the 21-year-old brother of Kansas City Chiefs’ quarterback Patrick Mahomes endured homophobic chants from a member of the crowd as he stood on the sidelines.

Jackson Mahomes, who is well known on TikTok, was snapping some photographs of his brother’s fiancée, Brittany Matthews, when a fan began yelling, “Hey Ma-homo” at him.

A video of the incident, which appears to have been recorded by the fan yelling the slur, shows Mahomes with his back turned to the fan ignoring the insult.

Matthews, however, looks directly at the fan and yells, “That’s rude.”

Mahomes later posted a TikTok video of himself dancing on the sidelines of that game. He did not acknowledge the homophobic moment.

This is far from the first time Mahomes – who is straight – has experienced homophobia, despite his popularity on TikTok (he has almost a million followers).  It reached a point that he had to threaten to publicly expose those sending him “rude stuff” in hopes of deterring the harassers.

There are multiple videos, and even compilations, dedicated to social media users making fun of Mahomes and his sexuality. Some clips even go as far as to portray the Mahomes brothers’ father seemingly disapproving of Jackson being “Mahomo.”

In a May 2020 Youtube video, Jackson addressed the question of his sexuality head on.

“I am attracted to girls, and I think it’s actually really a hurtful question because I am friends with a bunch of people that are gay and its just kind of really disrespectful in my opinion to ever judge someone based on what they choose.”

He also said that his high voice is one of his biggest insecurities.

“I get so much hate from it. I get so much judgement from my voice. Everyone automatically assumes as soon as I start talking, ‘Are you gay, why does he talk like this?’ and it really bothers me.”

What should trans people do to change the name on their COVID vaccination card?