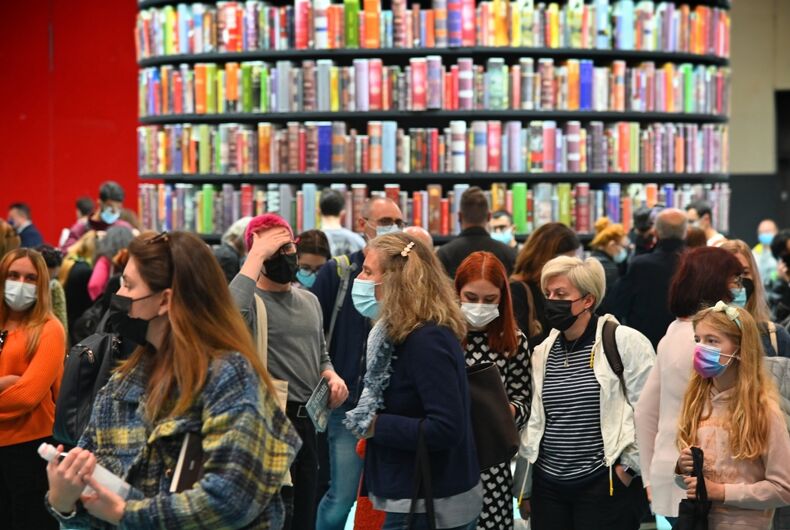 Last week, the Denton Public Library canceled a book-reading event for children that was about inclusion and acceptance, citing safety concerns after a Republican politician attacked the event, mistakenly claiming it was “transgender storytime.” Librarians were bombarded with threats of violence and vitriol because they thought the stories were about transgender children.

But hundreds of concerned citizens quickly rallied together to send a message to the bullies and thugs: Don’t mess with Texas kids or you’ll meet their parents.

The Denton Public Library holds Rainbow StoryTime events several times a year. The events present books about marginalized groups, self-acceptance, and friendship to kids. The events aren’t just about LGBTQ themes and the “rainbow” is in the name as a symbol of various groups of people coming together, not as a reference to the Pride flag.

One event was set for Saturday, the Transgender Day of Remembrance. Since the events often coincide with days that honor marginalized peoples, the library said someone “mistakenly” included the word “transgender” on a flyer about the event.

The event would have featured the books Red: A Crayon’s Story by Michael Hall, I’m a Girl by Yasmeen Ismail, and What Riley Wore by Elana K. Arnold. None of the books involves LGBTQ characters and are instead about self-acceptance even if others don’t accept you.

“Texas libraries are supposed to be places where Texans can read and learn, not spaces where public employees take the innocence of kids and replace it with Leftist sexual indoctrination,” said Don Huffines, who is running in the Republican primary for governor of Texas. “I am calling on the City of Denton to cancel ‘transgender storytime’ and fire the library employees who approved the event.”

Amber Briggle, the mother of a transgender boy, quickly sprang into action after the library canceled the event. She worked with her church and Armadillo Ale Works owner Bobby Mullins to host the event at a new location.

Five days after the event was canceled, hundreds of people turned out to the brewery for “Transgender StoryTime.” Instead of the books that Huffines had decried, two of them were swapped out for stories specifically about transgender people. Red was kept while Julian Is a Mermaid and Calvin, a story about a transgender child written by his parents, were added.

“I want trans kids to know they’re perfect as they are and that they’re worth fighting for,” Briggle told the Denton Record-Chronicle. “We have to celebrate these children. Reading a book with a transgender theme does not make kids transgender, but it does make transgender kids feel empowered.”A GOP politician launched an online mob to cancel the local library event. So parents rallied to send a message to the bullies and thugs: Don’t mess with Texan kids or you’ll meet their parents.

“Yelling, screaming, threatening violence and canceling an event is not the Denton way,” Denton city councilman Brian Beck said as the religious right and Trump supporters demonstrated outside of the venue.

He read the first book of the event to the gathered audience and invited others to come to see for themselves what a “StoryTime” event is about.

“Have you seen one of these events? I would ask them that question,” Beck said. “I think if you will go and watch professional librarians … your fears will be calmed.”

Parent David Morris brought his two children, ages 6 and 2, to the event after the original one was canceled. Neither of Morris’ kids are trans.

“It was a bunch to do about nothing,” Morris said. “It was just showing families that are built different. There’s no reason to be against people living their lives.”

On his website, Huffines took credit for the cancellation and said that he’s “pleased that the pressure raised by our campaign… led to the appropriate cancellation of this event. Children should not be used as pawns by adults with a sexual agenda.”

Earlier this year, Huffines made headlines when he pushed Gov. Greg Abbott (R) – who he’s challenging in the GOP primary – to remove information about an LGBTQ suicide hotline from a state website, even as there is evidence that the transgender youth suicide rate is going up.

Huffines said that the website had “some very disturbing information” and that the Abbott administration was “promoting transgender sexual policies to our- to Texas youth!”

Emails obtained by the Houston Chronicle showed that state employees were concerned about Huffines’s complaints and almost immediately pulled the website “for a comprehensive review of its content.”

“Yesterday was definitely a Stone Soup kind of day,” Briggle posted on Twitter after the event. “EVERYONE brought something to make Transgender Storytime magical. Yall SHOWED UP for trans kids and I couldn’t be prouder. Love always wins. Always.”

Yesterday was definitely a Stone Soup kind of day. EVERYONE brought something to make Transgender Storytime magical. Yall SHOWED UP for trans kids and I couldn't be prouder.