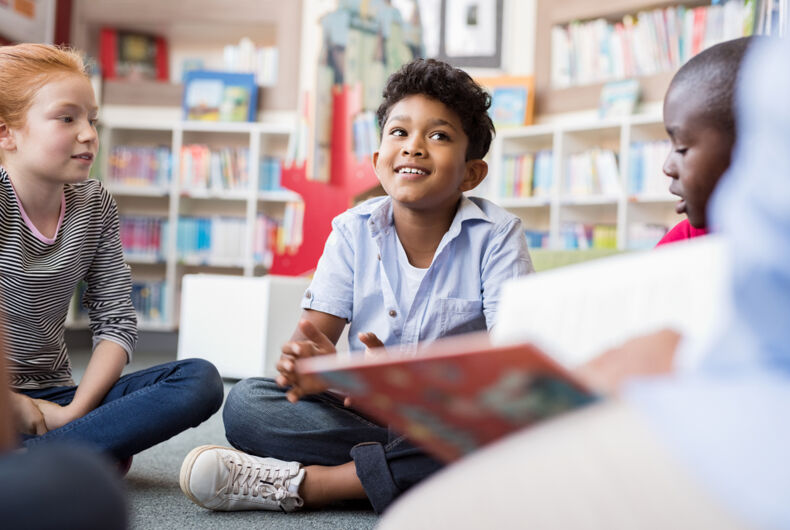 A library canceled a book-reading event for children that was about inclusion and acceptance, citing “safety concerns” after receiving threatening phone calls when a Republican politician attacked the event and drew statewide attention to it.

The Denton Public Library holds Rainbow StoryTime events several times a year. The events present books about marginalized groups, self-acceptance, and friendship to kids. The events aren’t just about LGBTQ themes and the “rainbow” is in the name as a symbol of various groups of people coming together, not as a reference to the Pride flag.

One event was set for this Saturday, which is the Transgender Day of Remembrance. Since the events often coincide with days that honor marginalized peoples, the library said someone “mistakenly” included the word “transgender” on a flyer about the event.

The event would have featured the books Red: A Crayon’s Story by Michael Hall, I’m a Girl by Yasmeen Ismail, and What Riley Wore by Elana K. Arnold. None of the books involves LGBTQ characters and are instead about self-acceptance even if others don’t accept you.

“Texas libraries are supposed to be places where Texans can read and learn, not spaces where public employees take the innocence of kids and replace it with Leftist sexual indoctrination,” said Don Huffines, who is running in the Republican primary for governor of Texas. “I am calling on the City of Denton to cancel ‘transgender storytime’ and fire the library employees who approved the event.”

The library said that they started receiving threatening phone calls because of “inaccurate information” spreading online and that they were going to “work to reschedule the event at a later time” due to the threats of violence.

The statement said that the Rainbow StoryTime event was not going to discuss “gender identity or anything relating to sex or sexual orientation” and that it would not “indoctrinate children into the transgender way of life.”

Possibly responding to online rumors that the event involved drag queens, the library said that no outside speakers were hired and the event was just going to be a librarian and a library assistant reading the books.

On his website, Huffines took credit for the cancellation and said that he’s “pleased that the pressure raised by our campaign… led to the appropriate cancellation of this event. Children should not be used as pawns by adults with a sexual agenda.”

Earlier this year, Huffines made headlines when he pushed Gov. Greg Abbott (R) – who he’s challenging in the GOP primary – to remove information about an LGBTQ suicide hotline from a state website, even as there is evidence that the transgender youth suicide rate is going up.

Huffines said that the website had “some very disturbing information” and that the Abbott administration was “promoting transgender sexual policies to our- to Texas youth!”

Emails obtained by the Houston Chronicle showed that state employees were concerned about Huffines’s complaints and almost immediately pulled the website “for a comprehensive review of its content.”