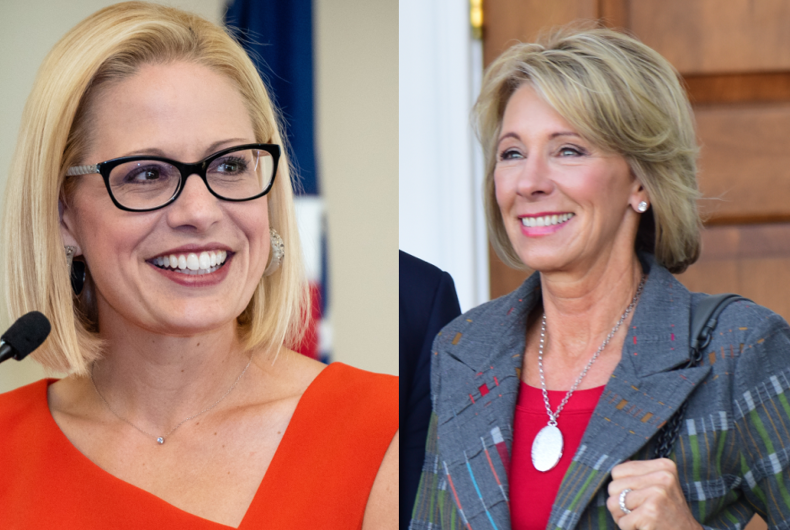 As Democrats try to pass a bill in the Senate that could limit the ability of multi-level marketing companies (MLMs, or pyramid schemes) to recruit unpaid workers, Sinema’s campaign contributions have again faced scrutiny due to her opposition to the bill.

Sinema is the main Democratic opponent in the Senate of the Protecting the Right to Organize Act (PRO), a labor bill that MLMs oppose because it would make it more difficult to classify workers as independent contractors.

MLMs rely on unpaid workers to sell their products, recruiting people with promises that they can make money while being their own bosses. Recruits are often required to buy the product themselves in order to sell it or to pay buy-in fees, and they’re often encouraged to recruit others to work under them so they can get a percentage of their sales.

A 2017 report from the Consumer Awareness Institute found that 99% of people recruited by MLMs actually lose money.

So it’s understandable why Congressional Democrats would try to make it harder for MLMs to recruit – labor unions and workers are key Democratic constituencies. But the PRO Act passed the House in March and has languished in the Senate.

And Sinema is the main opponent of the bill, so Politico looked into her campaign contributions and found that she has taken cash from MLMs, including $2500 contributions from Nu Skin Enterprises, ASANA Health Sciences, PAC Isagenix, Mary Kay, Herbalife… and Alticor, Amway’s parent company. All the companies are associated with Direct Selling Association, a trade group that represents MLMs.

Amway, which sells a variety of products, was founded by Robert DeVos who built a multi-billion dollar fortune through “the use of an elaborate pyramid-like distribution system in which independent distributors of Amway products received a percentage of the merchandise they sold and also a percentage of the merchandise sold by recruited distributors,” according to the Harvard Business School.

Robert DeVos’s son Dick DeVos – who became the CEO of Amway – married Betsy DeVos, who used the family fortune to influence local politics and advocate for charter schools in Michigan before Donald Trump tapped her to be Secretary of Education in 2017.

Her tenure at the Department of Education was marked by constant attacks on LGBTQ youth, particularly transgender kids. She immediately rescinded legal guidance issued by the Obama administration that told schools they had to treat trans students equally, she tried to make it easier for schools to opt out of anti-discrimination laws in secret, she tried to give federal money to schools that ban LGBTQ students, and she invited an anti-LGBTQ hate group to an official Department event.

The Department of Education, under her direction, jumped to join a lawsuit from a hate group trying to ban transgender students from participating in school sports. It also announced in 2018 that it would not investigate complaints from transgender students who were denied access to the bathroom that corresponds with their gender.

Sinema is one of two out LGBTQ senators, along with Sen. Tammy Baldwin (D-WI). Sinema, who is bisexual, has been one of the main opponents of a number of Democratic initiatives in the Senate, and she has already faced scrutiny for accepting campaign contributions from interests that oppose progressive legislation.

Sinema is the only federal lawmaker who got donations from Isagenix and Nu Skin. Several of the other MLMs only donated to Sinema and their home state senators, frequently Republicans.

“Contributions to candidates from DSA’s political action committee are based on a variety of factors,” a spokesperson for the Direct Selling Association said.