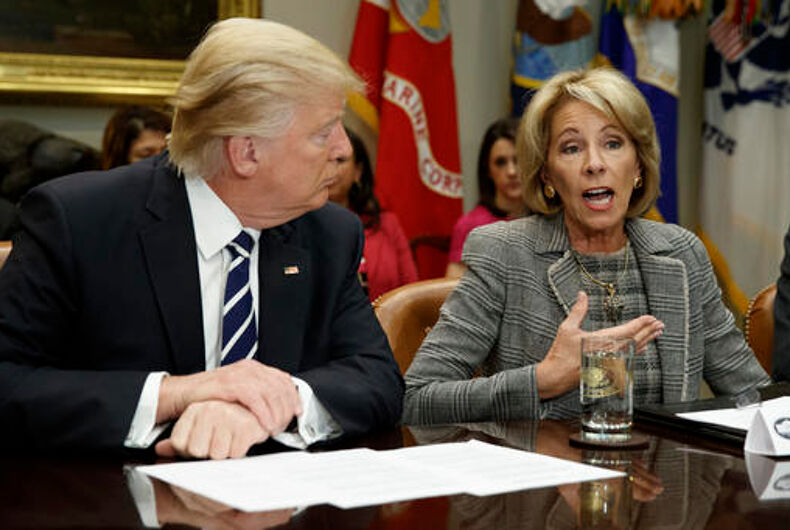 While the president’s tweets get all the attention, the damage being done by his minion’s policy changes often escape notice. In the latest example, Education Secretary Betsy DeVos wants to make it easy for Christian schools to discriminate against LGBTQ students without having to reveal their bias to the government.

At issue are regulations under Title IX, the federal law that prevents discrimination on the basis of gender. Advocates, including Department of Education employees, have been concerned from early in DeVos’s tenure that watering down that protection will have an outsized impact on LGBTQ students.

In the past, schools have been able to opt out of complying with the law if they cite a religious exemption. However, the Obama administration required the schools to submit a letter explaining their request for an exemption. The list of schools was then published online.

New regulations proposed by DeVos would eliminate that requirement. Instead, who is opting out would just be a little secret between DeVos and the schools. The public would never know.

The proposed change is a sort of bonus for Christian schools. The focus of the regulation changes are meant to make it harder for sexual harassment cases to proceed. That change would hit transgender students particularly hard.

Hiding the list of schools that affirmatively discriminate against LGBTQ students means students won’t have advance warning of what they may face if they come out.

“It’s incredibly infuriating that the administration is discouraging schools from ensuring that their students understand when the school may take disciplinary action against them,” Sarah Warbelow, legal director of the Human Rights Campaign, told BuzzFeed News.

The regulations are currently in draft format and haven’t been formally released for public comment. That is supposed to happen next month. While the regulations may change in the interim, the chances of that seems slim, given DeVos’s affinity for anti-LGBTQ groups.
News
Betsy DeVos, Department of Education, Education, LGBTQ students, Title IX