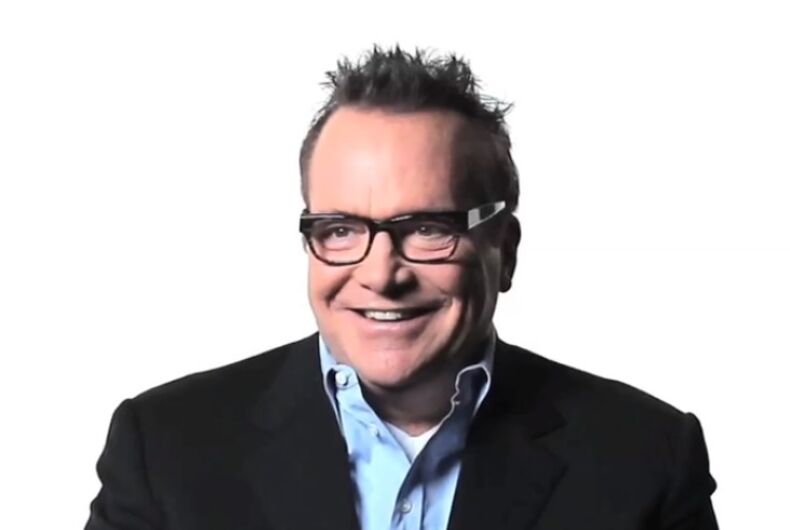 Actor Tom Arnold and producer Mark Burnett got into a physical altercation at a pre-Emmy party last night, and it was over Donald Trump.

According to Arnold, both he and Burnett arrived to the “Evening Before Emmy” party, a fundraiser hosted by the Motion Picture Television Fund, at around 9:30 p.m. Sunday night.

He says that’s when Burnett “went apeshit” and tried to choke him.

Mark Burnett just went apeshit & choked me at this huge Emmy party then he ran away with his torn Pink shirt & missing gold chain. I’m waiting for LAPD

Arnold is working on a series for Viceland in which he searches for the “hidden Trump tapes” – tapes of outtakes from The Apprentice. Omarosa Manigault, in her recent book, said that Trump used the n-word while filming The Apprentice and that it was caught on tape.

Omarosa has suggested that Burnett has the tapes but has not released them. Burnett says that the tapes are owned by MGM and he doesn’t have access to them.

And, for his part, Donald Trump tweeted that he doesn’t “have that word in my vocabulary, and never have.”

Burnett’s wife, Roma Downey, remembers last night’s events differently. She tweeted that Arnold attacked her and her husband, and posted a photo of a bruise on her hand that she says Arnold caused.

Got this bruise tonight when Tom Arnold tried to ambush my husband Mark and me at a charity event. Is your TV show worth it Tom?Please stop pic.twitter.com/lXvuKjIMI2

Arnold said that she is lying and that he is going to sue her for defamation.

Bullshit. You lie your crazy husband attacked me you psycho. I’m filing police report & suing you for defamation. https://t.co/9yXAEXM6na

He claims he has witnesses to back him up as well as a video shot on director Bryan Fogel’s phone.

Roma knocked Bryan Fogel’s phone out of his hand after Mark Burnett chocked me. Bryan came with me. He won the Oscar this year for his amazing documentary Icarus. He has tape. https://t.co/nPJyDAarsE

An anonymous source told Variety that security broke up a “scuffle” between the two men, and they were both allowed to enter the event after settling down.

The Los Angeles Police Department has not filed a report on the incident so far.

‘Vampire facials’ spa shuts down after exposing customers to HIV