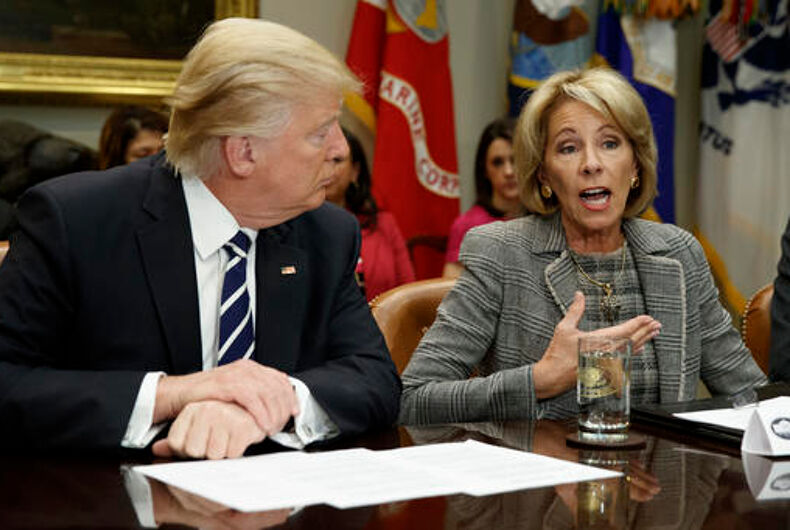 WASHINGTON (AP) — LGBT employees have asked Education Secretary Betsy DeVos to commit to safeguarding anti-discrimination regulations amid fears that the Trump administration may weaken those protections.

In the email, obtained by The Associated Press on Friday, staffers at the Education Department urged the new secretary to issue a statement confirming her commitment to Title IX rules, which prohibit discrimination based on sex in educational programs.

“At a time when students and individuals across the nation are being targeted with overtly discriminatory treatment, our nation needs you to remind and empower students about their right to equal access to education,” the staffers wrote.

The email was sent Wednesday by a group of lesbian, gay, bisexual and transgender Education Department employees and their supporters.

“We look forward to partnering with you in this very important work and hope that as a ‘door open type of person,’ you will open your office to hear from both your LGBTQ staff and the LGBTQ families our Department serves,” the employees wrote.

The move follows a decision by President Donald Trump’s Justice Department to withdraw a motion in the ongoing lawsuit over bathroom rights for transgender students in public schools. LGBT advocates said they see the move as a signal the administration will not protect transgender rights.

The letter comes as DeVos establishes herself at the agency after a bruising confirmation battle. DeVos, a wealthy Republican operative and champion of charter and private schools, was confirmed for the job by the narrowest possible margin earlier this month amid fierce opposition from labor unions who said she was hostile to public schools.

Civil rights advocates have expressed concern over DeVos’ stance on discrimination issues, pointing to her support of anti-LGBT groups. During her confirmation hearing DeVos vowed to protect the interests of all students and said she strongly condemns all forms of discrimination.

In a separate development, DeVos announced Friday that a government website devoted to students with disabilities, which had been down for more than a week, has been restored and will be updated with input from interested parties. She also accused the previous administration of neglecting the website. The American Federation of Teachers disputed that contention.