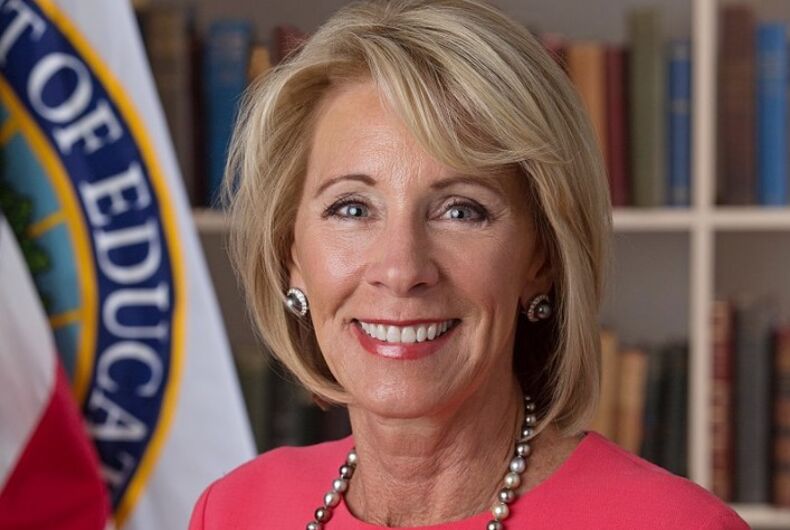 The Department of Education has stepped up its dismissal of transgender student bathroom concerns, officially announcing that it will not investigate or take any actions concerning complaints by youth blocked from using the facilities matching their gender identity.

BuzzFeed News broke the news, after obtaining confirmation after weeks of contacting officials in order to gain a clarification on how the policy was to be interpreted.

This is the most definitive stand against trans students the Trump administration has taken in a year long saga that began when it rescinded the Obama-era guidance to public schools directing them to allow students to use facilities matching their gender identities.

A court filing from the Department of Justice said it would “consider fully and more completely the legal issues involved.”

This was followed by a June memo saying Office of Civil Rights officials were allowed to “evaluate each allegation separately, searching for a permissible jurisdictional basis for OCR to retain and pursue the complaint. It is permissible, for example, for one allegation in a complaint (such as harassment based on gender stereotypes) to go forward while another allegation (such as denial of access to restrooms based on gender identity) is dismissed.”

In January, it was reported that at least three transgender students who felt their rights to bathroom use and participation on sports teams had been violated were told by the Office of Civil Rights that it was no longer required to handle those issues.

Still, the Trump administration had not gone on record with this position, until at last responding to BuzzFeed‘s request. There has still been no public announcement of this policy. From their report:

For the past three weeks, BuzzFeed News called and emailed Education Department officials attempting to pinpoint the agency’s position.

Finally on Thursday, Liz Hill, a spokesperson for the agency, responded “yes, that’s what the law says” when asked again if the Education Department holds a current position that transgender student restroom complaints are not covered by a 1972 federal civil rights law called Title IX.

Asked for further explanation on the department’s position, Hill said Friday, “Title IX prohibits discrimination on the basis of sex, not gender identity.”

She added that certain types of transgender complaints may be investigated — but not bathroom complaints.

“Where students, including transgender students, are penalized or harassed for failing to conform to sex-based stereotypes, that is sex discrimination prohibited by Title IX,” Hill said. “In the case of bathrooms, however, long standing regulations provide that separating facilities on the basis of sex is not a form of discrimination prohibited by Title IX.”

“Until now, the official position of the Department has been that Title IX protects all students and that they were evaluating how that protection applies to the issue of bathroom access,” Catherine Lhamon, who led the Education Department’s Office for Civil Rights during the Obama administration, told BuzzFeed.

“This new categorical bar of civil rights protection for transgender children required to attend schools every day ignores the text of the law, courts’ interpretation of the law, the stated position of the Department to date, and human decency.”

“It marks a shift in position for the Education Department that is particularly remarkable in light of case law,” said Harper Jean Tobin, policy director for the National Center for Transgender Equality, who argued it was a move based on ideology, not law.

Trump administration officials were not particularly forthcoming on what led them to their interpretation of the law.

“That interpretation represents an appalling abdication of federal enforcement responsibility, inconsistent with the law and with courts’ interpretation of the law, and totally lacking in human compassion for children in school, whom the Department is charged to protect,” Lhamon said.

The Democratic National Committee released a statement condemning the policy.

“In the last year, the Trump administration has rolled back critical protections for the LGBTQ community, and today’s decision by Betsy DeVos is no different,” said LGBTQ Media Director Lucas Acosta. “By refusing to take action on complaints filed by transgender students denied the right to use bathrooms that match their gender identities, DeVos is willingly undermining Title IX and turning her back on individuals facing institutional discrimination.”

“Despite the ouster of Virginia’s ‘chief homophobe’ by a transgender woman and losing the North Carolina governor’s mansion following backlash against the state’s ‘bathroom bill,’ Republicans haven’t learned that their far-right, anti-LGBT agenda is out of step with Americans across the country who will hold them accountable come November.”

“While civil rights advocates have suspected that the Department of Education was not acting on complaints brought forward by transgender students, reports that these violations are completely being ignored are reprehensible,” Human Rights Campaign Legal Director Sarah Warbelow said in a statement. “The department’s failure to act conflicts with the law in multiple jurisdictions, including federal circuits, and further emboldens those who seek to discriminate against transgender students. Once again, Secretary DeVos proves she is not interested in protecting transgender students and instead is choosing to advance the dangerous Trump-Pence anti-LGBTQ agenda.”