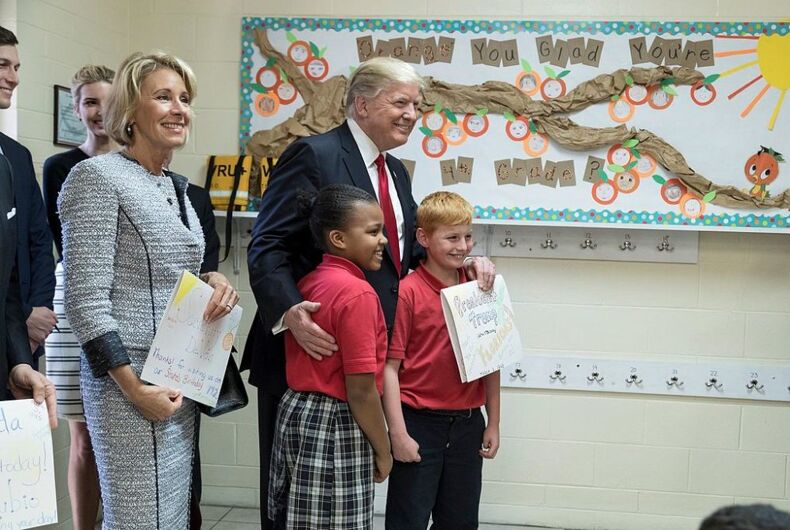 President Donald Trump and Education Secretary Betsy DeVos with students of Saint Andrew Catholic School on Friday, March 3, 2017, during a tour of the school in Orlando, Florida.Photo: Public Domain (WhiteHouse.gov)

The Education Department under President Trump is refusing to hear the civil rights discrimination complaints of transgender students.

Its Office of Civil Rights has informed at least three trans students who feel their rights to bathroom use and participation on sports teams have been violated, that it is no longer required to handle such issues.

The Trump administration changed course on the issue, reversing an Obama-era directive to public schools instructing them to allow trans students to use the facilities matching their gender identity.

It has argued that the issue should be decided locally, creating questions as to how it would deal with discrimination complaints. The Obama administration interpreted Title IX as including protections for transgender individuals.

In June, the administration put out a murky memo on the issue that worried LGBTQ rights advocates, with vague language about “evaluating complaints of sex discrimination against individuals whether or not the individual is transgender.”

“They are hinting that they are not enforcing the law,” Mara Keisling, executive director of the National Center for Transgender Equality, said at the time.

HuffPost, which broke the story, got its hands on one of the agency letters sent to a transgender student, dismissing their complaint.

“OCR determined we do not have subject matter jurisdiction over Allegation 1, insomuch as the alleged discriminatory conduct you described does not raise any prohibitive bases under the civil rights laws OCR enforces,” it reads.

“That’s an understanding of Title IX that is inconsistent with a majority of court cases in the last several years,” said Nathan Smith, director of public policy for the GLSEN. “I think what’s important to note is it’s not that the Obama administration came out of the blue to say Title IX now covers transgender students. There’s a wave of court cases from district and circuit courts that have upheld that understanding.”

The number of complaints is reportedly down by 40 percent compared to last year, presumably due to the change in administration and its different interpretation of the relevant laws.

Harper Jean Tobin, director of policy at the National Center for Transgender Equality, said this shows that “students who are facing discrimination, who really are suffering in their ability to get an education, don’t believe that OCR will protect them.”

“Through their inaction, the Trump administration is attempting to write transgender students out of the protections of Title IX,” said James Esseks, director of the LGBT & HIV Project at the American Civil Liberties Union, in a statement.

“But the courts have concluded time and again that federal civil rights laws protect trans students from discrimination, including in the context of restroom and locker room use. The Trump administration may abdicate their obligation to trans students and their families, but the ACLU will not. We stand with transgender students, and will continue to fight for their right to an education free from discrimination.”