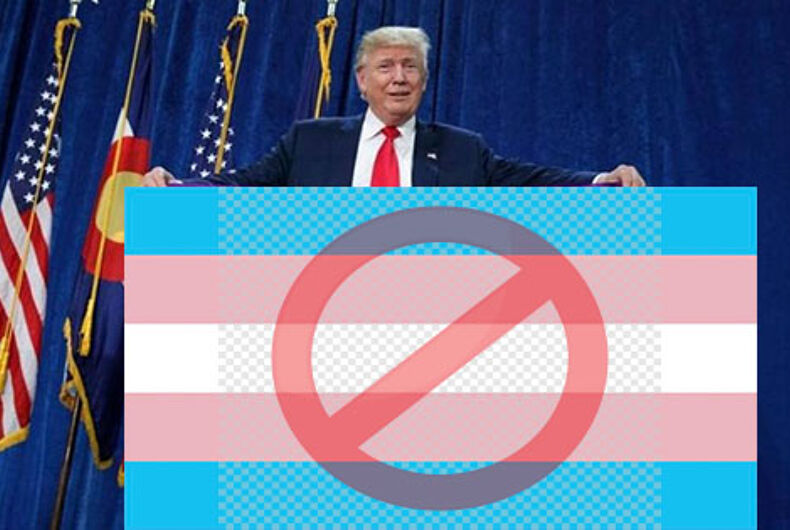 The Department of Education’s Office for Civil Rights reportedly has received new guidance from the Trump administration on how to deal with cases of discrimination against transgender students.

But what that schools across the nation are supposed to do with that guidance is unclear.

The instructions obtained by HuffPost were issued to employees last week, the site reports, and instruct officials to rely on “Title IX and its implementing regulations… in evaluating complaints of sex discrimination against individuals whether or not the individual is transgender.”

Last year the Obama administration issued guidelines to the nation’s schools through the Departments of Education and Justice, directing schools to interpret Title IX as protecting trans students from discrimination. The new Trump guidelines, which follow the rollback of those directives, make no mention of how Title IX is to be interpreted.

An employee familiar with the guidance told HuffPost he interprets this to mean that officials should investigate issues of discrimination just as they would have before the Obama-era rules were implemented.

Advocates for transgender students fear that the Office of Civil Rights (OCR) is trying to ditch the burden of having to protect students against bathroom discrimination.

According to the report, there’s just one instruction specifically addressing student bathrooms.

“They are hinting that they are not enforcing the law,” Mara Keisling, executive director of the National Center for Transgender Equality, told HuffPost.

Keisling said her organization is still trying to determine what this memo portends in a legal framework, and until then said she “would not be surprised if this turns out for the worst.”

GLSEN calls on OCR to specify whether they will defend trans students’ access to safe and appropriate school facilities – regardless of where the student lives or what local protections may or may not exist. Forcing trans students to use restrooms that do not align with their gender identity puts those students at risk of harassment and violence.

The action follows a report that Attorney General Jeff Sessions and the DOJ appear to be backing away from using consent decrees. ProPublica reports officials in the DOJ civil rights division have issued verbal instructions to its staff to seek settlements without consent decrees, resulting in zero continuing court oversight, and is another move by the Trump administration to limit federal civil rights enforcement.