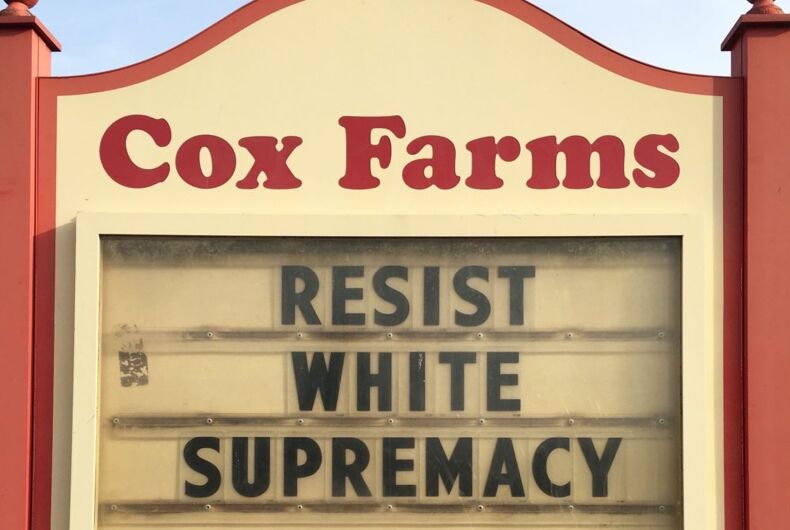 Cox Farms in Centreville, Virginia, is no stranger to controversy. The family farm’s pumpkin patch is a local fall tradition and they’re well known for the quality of their produce, but their neighbors are upset again – because the farmers condemned white supremacy.

Cox Farm’s first brush with a right wing mob hellbent on stamping out tolerance and inclusiveness happened in 2000. After flying rainbow flags on their property for years above attractions like a hay tunnel, the owners learned that the banners are commonly used as a symbol of LGBT liberation.

Their teenaged daughter had just come out of the closet and the flags seemed like an appropriate symbol of their love for their daughter and the community, so they kept the flags flying proudly.

It wasn’t long, however, before religious groups and social conservatives caught wind of the flags too and started raising hell. Groups like Tradition of Roman Catholic Homes and private schools started canceling planned trips to the property according to the Washington Post and the owners were inundated with phone calls and emails denouncing their godless ways.

That controversy eventually petered out, but now the farm is facing another backlash for their “progressive” view that all people should be treated equally and bigotry should not be tolerated.

“Our little roadside signs have power. Most of the time, they let folks know that our hanging baskets are on sale, that today’s sweet corn is the best ever, that Santa will be at the market this weekend, or that the Fall Festival will be closed due to rain,” the owners wrote on Facebook.

“During the off-season, sometimes we utilize them differently. Sometimes, we try to offer a smile on a daily commute. Sometimes, a message of support and inclusion to a community that is struggling makes someone’s day. Sometimes the messages on our signs make people think… and sometimes, they make some people angry.”

Last week, the farm posted the message “Rise & Resist” on their sign and were quickly swamped with people who wanted them to spell out exactly what they meant. In an effort to be clear, they changed the sign to read “Rise Up Against Injustice” on one side and “Resist White Supremacy” on the other.

“We sincerely believe that fighting injustice and white supremacy is a responsibility that can- and should- unite us all. We struggle to see how anyone other than self-identified white supremacists would take this as a personal attack,” the farm wrote.

“Cox Farms is a small family-owned and family-operated business. The five of us are not just business-owners; we are human beings, members of the community, and concerned citizens of this country. We are also a family, and our shared values and principles are central to our business.

“We’re not seeking to alienate folks who have different perspectives on tax reform or infrastructure spending. But when it comes to speaking out against systems of oppression and injustice, we see it as our moral responsibility to use our position of privilege and power, along with the tools of our trade and the platforms available to us, to engage visibly and actively in the fight for justice. Our roadside sign messages are one small way we do this.”

At the end of their post, the small company wrapped up their history of facing down controversy over the sign with a firm statement of support for the wider community and a promise not to back down.

“A few years ago, some folks got very angry about the Black Lives Matter sign hanging in a window of an owner’s home on the farm. Last year, some locals took offense at our ‘We love our Muslim neighbors’ and ‘Immigrants make America great!’ sign messages.

“What do all of the messages have in common? They are statements of inclusion. They attempt to tell members of our community, people that might feel discriminated against or alienated in a particular moment, ‘Hey, you are welcome here, too.’

“To our customers and neighbors that feel that this is somehow a divisive stance, we ask you to reflect on the possibility that your lived experience may be one that hasn’t necessitated a message of inclusion to make you feel welcome.”

Our little roadside signs have power. Most of the time, they let folks know that our hanging baskets are on sale, that…