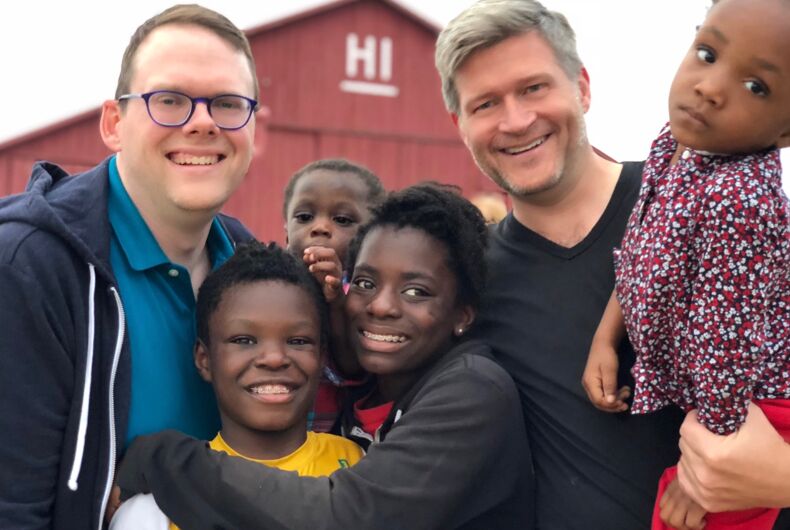 Like many new parents, John Ireland had no idea what he was doing when he first decided to have children with his husband, Duncan. Not only did he have to learn all he could about raising kids, but also about the myriad of ways that gay men can build a family.

Now, the expert father of five has been parenting for decades, and he has devoted his life to helping other gay dads and dads-to-be build community and become more confident parents.

Ireland is the longtime board president of the Pop Luck Club, a Los Angeles organization that seeks to “advance the well-being of gay dads and their children… through mutual support, community collaboration, and public understanding,” as the website states.

The Pop Luck Club supports gay dads at any stage in building or raising their families, from those who are still figuring out if they want to become parents to those who already have children and are looking for community.

“I found this really strong connection with a big group of guys,” he told LGBTQ Nation, “and what we have in common is we want the best for our kids.”

Throughout his almost twenty years with the Pop Luck Club, it has transformed from a “play in the park dads group,” as he described it, to one that includes guest speakers, workshops, partnerships, and organized family fun events.

Ireland and his husband built their family through the foster to adoption process, and their Pop Luck family helped them every step of the way.

“These five siblings have just been a roller-coaster ride,” he said. “It’s just been amazing, and Pop Luck has been there the entire time, from two years before we had kids to the middle of the night, ‘What do I do this baby has a fever.’”

Pop Luck Club, he added, has not only been beneficial for the fathers who participate, but it has also been good for the children.

“My two high schoolers, they know kids who have families like ours. They have always known them, and that has helped to lift a whole overlay of difficulty for them as they’ve grown into young adulthood.”

Ireland’s passion for the group led him to take on more active leadership roles, and it even led him to co-found a spinoff nonprofit with another Pop Luck member. That organization, called Raise a Child, was founded to connect prospective LGBTQ parents with opportunities to provide homes for kids in need.

“That is one of the greatest sources of pride for me,” Ireland said, “the sort of anecdotal community peer support we offer in Pop Luck Club has been professionalized into a parent advocacy [organization that provides] backchannel communication to professionals in child welfare.”

The organization works directly with LA’s Department of Children and Family Services (DCFS), and, in addition to helping connect parents and children, it has a more streamlined process for helping LGBTQ prospective parents who encounter discrimination when trying to foster or adopt.

Raise a Child recently celebrated its 10th anniversary and has also expanded to support non-LGBTQ parents as well. It’s the same process for everyone, after all, Ireland said, and the goal is to find safe and loving homes for as many children as possible.

Pop Luck, however, has remained exclusively for gay men. It was something Ireland didn’t quite understand at first. He wondered why lesbians and other LGBTQ people couldn’t join, but he came to realize the importance of carving out space for a group that is often discounted as incapable of raising children.

Ireland explained that gay men are often subject to the stereotype that men in general are incompetent when it comes to caring for their kids. He remembers many times when well-meaning friends have literally taken his baby out of his hands and offered to complete what to him were simple tasks like diaper changing.

Pop Luck Club is devoted to centering dads and to being a place where no one doubts their abilities.

“I can’t go as deep into what it feels like as a guy to be negated, invalidated,” he said, “especially when I’m expressing love and care for my child, feeding them goldfish or little cut up bits of melon…To be able to find other guys who have also really had to deal with those dynamics of being a gay dad, it’s unique.”

That said, the group maintains strong connections to other co-ed parenting groups in the area, with whom they often engaged in joint programming.

Ireland also said he has seen a lot of change over the past twenty years in regards to attitudes about gay men having children. When he first came to Pop Luck in the early 2000s, far more participants were confronted by loved ones who felt they would traumatize any kids they brought into their lives.

“That was pretty acceptably spoken by a lot of people 20 years ago. Nowadays, that’s the real outlier experience.”

Ireland spent most of his interview with LGBTQ Nation gushing about the other men in Pop Luck Club who have helped him grow into the father he is today. It is clear, however, that he, himself, has made an inalienable difference in the lives of other parents.

Andrew Rakos, a founding member of the Pop Luck Club, nominated Ireland for this recognition.

Rakos wrote, “I am a better man, a better father, and a better friend by knowing there are men like him on the planet…He is the ultimate hero, not looking for publicity, simply doing the right thing…His story needs to vibrate in our world and wake us all to the power of love and patience.”

Ireland’s response to hearing these words was to declare that everything Rakos said about him he could say right back.

“If anything, the Popluck Club has been an experience of paying it forward,” Ireland said, “and I am paying forward what Andrew has shown me and what Andrew’s kids have shown me… The only reason I’m so successful is because of these people in my village.”