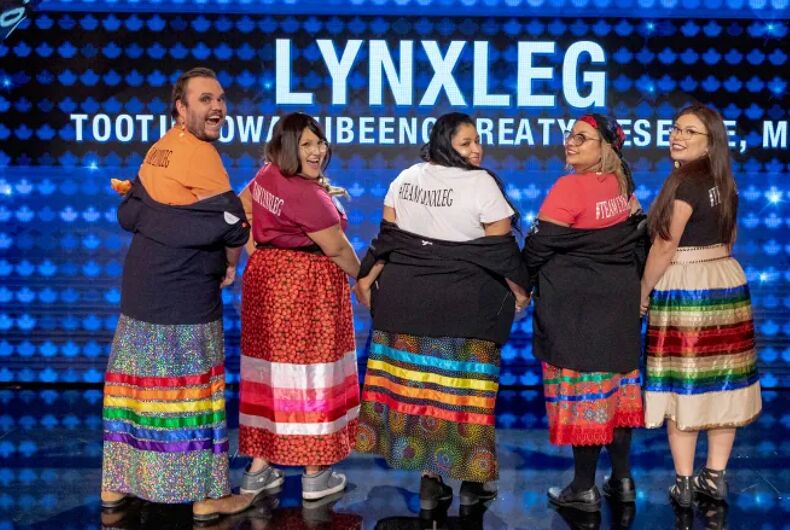 A First Nations family appearing on Family Feud Canada is going to bring a taste of their culture to the show – including some LGBTQ Pride.

The Lynxleg family, who are Anishinaabe and from the  Tootinaowaziibeeng First Nations territory in Manitoba, will appear on an upcoming episode wearing political T-shirts and traditional ribbon skirts.

Ribbon holds significant meaning for many indigenous tribes and is often sewn into clothing to symbolize different causes, traditions, and beliefs, as explained by Indigenous news outlet APTN National News.

One member of the Lynxleg family, Joshua, identifies as two-spirit, which is a term to describe Native American people who have traditionally male and female traits and fulfill a social role outside of that of men and women. A photo promoting the episode shows Joshua wearing a silver glittery skirt adorned with rainbow ribbon.

“My friend Susan Guimond made the ribbon skirt especially tailored to me,” Joshua told Canadian news outlet CBC News. “We went to the fabric store and of course bought the gayest, most glittery fabric there was.”

The family members also wore shirts calling attention to important issues in their community, such as clean water, education, and Indigenous women and girls that have been murdered or missing.

Their episode will air on November 8.

Tune into Family Feud Canada on November 8th at 7:30 pm. The Lynxleg family will be representing! pic.twitter.com/4A6pmQO1qn

And Joshua isn’t the only one infusing Pride into Family Feud Canada this year.

In the September premier, the show made history by featuring its first-ever drag queen when Scott Bosse competed on the show as his alter ego, Contessa.

“I was there in full drag as the team captain coming with her family, and what a message that’s going to send to so many communities,” Bosse told the Toronto Star.

Tonight on the SEASON PREMIERE of Family Feud Canada, The Bosse-LaRose and Gujral families face off for the chance to play "Fast Money" and win $10,000. pic.twitter.com/Y7nczCm0xK

And in October, the Seivewright Family, which includes two LGBTQ couples, competed on the show. Promo photos show the family clad in matching rainbow bandanas and proudly holding up a Pride flag together.

Tonight on a NEW EPISODE of Family Feud Canada, the Seivewright family tries to bank another $10,000 as they face the Valiante family