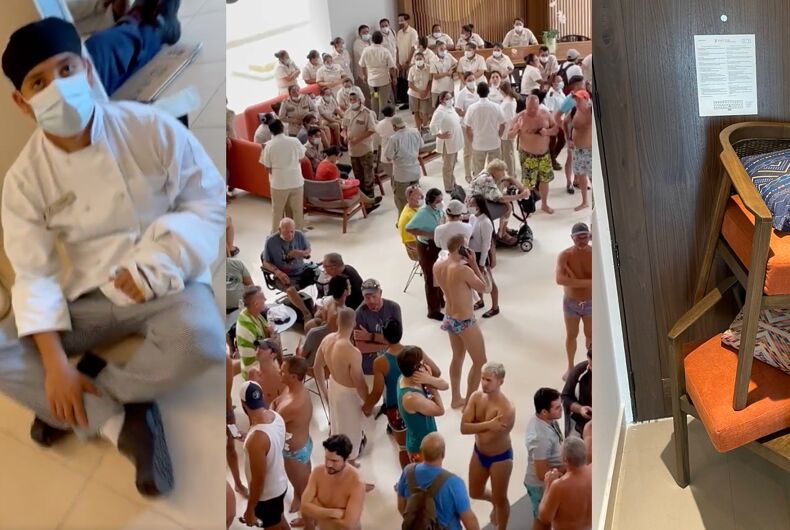 Staff and tourists ran for cover when rival drug gangs opened fire on a beach in CancunPhoto: Screenshot Twitter @MikeSington

A group of LGBTQ people vacationing in Cancun, Mexico had to run cover when rival drug gangs opened fire in a shootout on the beach that left two suspected gang members dead.

None of the tourists were seriously injured although there was a minor injury that sent an individual to the hospital briefly.

Related: Is it okay to travel to homophobic countries?

Patrick Gunn, the co-founder of VACAYA, the company that organized the tour, told LGBTQ Nation that approximately 750 guests were part of the tour. He also stressed that this was not targeted toward the LGBTQ community.

The two men shot and killed are “presumed to be drug dealers,” according to local authorities.

Witnesses say that multiple gunmen armed with “long guns” and machine guns appeared on the beach actively shooting at each other. Vacationers ran for cover, barricading themselves in rooms and being led by resort staff to areas considered safe. Officers assisted in locating and moving guests to the lobby where they announced that an assailant had been arrested.

“My understanding is this was a drug cartel issue and we were just in the wrong place,” guest Jack Aaronson told The Daily Beast. “We all dove into our rooms and sheltered in place as quietly as possible.”

“Some of our guests were on the beach. One said the man with the machine gun looked him right in the eyes and he thought it was over. He was obviously incredibly shaken, and he hid under a beach chair for an hour until the police got him.”

“The officials from multiple branches of Mexican security that came to our aid yesterday acted with bravery and care. It was clear our safety and security were their #1 priority and we are forever grateful,” Gunn said. “We have been given the all-clear from Mexican officials to resume operations. We are now working hand in hand with our hotel partner to calm and nurture our guests.”

Gang violence has steadily risen in the area as resources are focused on preventing Central American migrant caravans from entering the country’s southern border en route to the United States. Drug cartels have terrorized Mexico for decades, with over 120,000 dead and 27,000 people still missing.

Active shooter on property at Hyatt Ziva Riviera Cancun Resort. All guests and employees are hiding. Paramedics have arrived.

All guests and employees taken out of hiding now and brought to lobby. Active shooter at Hyatt Ziva Riviera Cancun Resort. Still no update from hotel. People are hugging each other and crying. pic.twitter.com/AqbYms3AUb

Active shooter at Hyatt Ziva Riviera Cancun Resort. All guests confined to lobby now. Hotel staff huddled together in corner. Still no announcement or update from hotel, Hyatt, or police. Several guests have now told be they saw gunman come up from the beach, actively shooting. pic.twitter.com/fL9BP7Jisb

Guests being escorted back to rooms now in small groups based on building number. They keep telling us to stay quiet. pic.twitter.com/OZa64msm39

Safely escorted to lobby where staff and guests are supposed to stay put. pic.twitter.com/uiu6NMRKhi

Teen sues Tennessee over trans sports ban. He just wanted to play on the golf team.