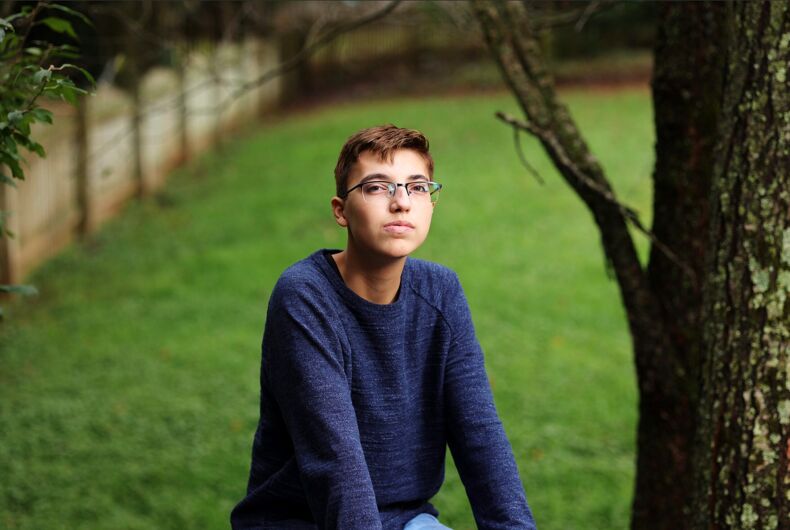 A 14-year-old transgender boy is suing the state of Tennessee over its new law that bans transgender students from participating in school sports, which caused the teen to be barred from trying out for the boys’ golf team.

With the support of the ACLU and Lambda Legal, high school freshman Luc Esquivel is taking on S.B. 228, which Gov. Bill Lee (R) signed into law in March.

The law bans trans students in the state from competing in middle or high school sports in accordance with their gender identity. It requires students to play sports as the sex they were assigned at birth and says they must show proof of that sex through their original birth certificate.

On Twitter, Lee claimed the bill would “preserve women’s athletics and ensure fair competition,” but Esquivel says it is merely discrimination.

“I was really looking forward to trying out for the boys’ golf team and, if I made it, training and competing with and learning from other boys and improving my game,” Esquivel said in a statement released by the ACLU. “Then, to have the legislature pass a law that singled out me and kids like me to keep us from being part of a team, that crushed me, it hurt very much. I just want to play, like any other kid.”

“It made me, and still makes me, so angry,” she said. “A mother wants to see their kid happy, thriving, enjoying being a kid. High school sports are an important part of that. I know how much Luc was looking forward to playing on the boys’ golf team.”

She went to discuss how “heartbreaking” it feels to watch him miss out on this key high school experience.

“It is painful for a parent to see their child subjected to discrimination because of who they are. I’m proud Luc is taking this step, and his father and I are with him all the way.”

“S.B. 228 was not enacted to address any problem in school sports,” the lawsuit says. “Rather, it was part of a wave of legislation in Tennessee and across the country targeting transgender people for disapproval and exclusion from full participation in society.”

Leslie Cooper, deputy director of the ACLU’s LGBTQ & HIV Project, said that this is the fifth challenge to an anti-trans law the organization has put forward this year.

“We will continue to fight these relentless attacks on trans youth,” Cooper said. “There is no reason, apart from the legislature’s desire to express its disapproval of transgender people, to keep Luc from playing on the boys’ golf team.”

Hedy Weinberg, ACLU of Tennessee executive director, also pointed out that when Tennessee lawmakers approved S.B. 228, they couldn’t name any situation where a student was harmed by the participation of a trans student-athlete.