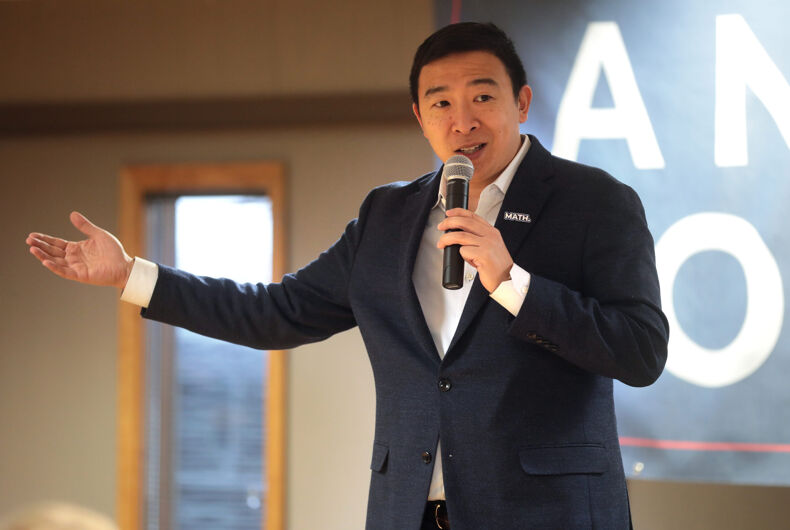 Andrew Yang speaking with supporters at a town hall at the American Legion Post 111 in Newton, Iowa on January 13, 2020Photo: Gage Skidmore

Andrew Yang, an entrepreneur that ran for President in 2020 and for mayor of New York City in 2021 as a Democrat before creating his own third party, has come out to defend “great guy” Dave Chappelle over his repeated anti-transgender remarks, which has caused controversy.

Yang, who made numerous attempts to sell his agenda to LGBTQ voters — some that caused outrage and backlash of their own — claims that reports that Chappelle demeaned teenagers attending his former high school, which Chappelle’s spokesperson confirmed, are a “press hit job” that is “awful.”

During both of his campaigns for office, which both resulted in him withdrawing after failed primary contests, Yang did not tout many endorsements from celebrities or influential public figures. Chappelle was one of the first and few to jump behind his presidential campaign in 2020.

In turn, after news came out that Chappelle had visited his former high school and alma mater, Duke Ellington School for the Arts, and demeaned the children that criticized him, Yang has gone to bat for him.

“I was endorsed by a number of celebrities. Dave Chappelle is the only one who came to Iowa and South Carolina to perform on my behalf,” Yang began in a thread of tweets this weekend, “with proceeds going to the campaign – and even made phone calls and hung out with staff.”

Yang claims “He did it because he wants to help people,” and he believes Chappelle to be a “Great guy.”

“The press hit job on his visiting his high school is awful,” Yang continued. Chappelle was a “successful alum who fundraises for school returns, speaks to students and gives everyone a free meal for Thanksgiving,” he argues, “But of course in 2021 an obvious positive gesture is framed negatively in the media.”

I was endorsed by a number of celebrities. Dave Chappelle is the only one who came to Iowa and South Carolina to perform on my behalf – with proceeds going to the campaign – and even made phone calls and hung out with staff. He did it because he wants to help people. Great guy. pic.twitter.com/6cGMcGf3ay

The press hit job on his visiting his high school is awful. Successful alum who fundraises for school returns, speaks to students and gives everyone a free meal for Thanksgiving. But of course in 2021 an obvious positive gesture is framed negatively in the media.

Yang then encourages everyone to watch Chappelle’s latest project, a documentary named “Untitled,” which he has shown at various tour stops across the country, but is not yet available for wider release.

“He helped a lot of people. That’s the kind of person he is,” Yang claims.

To get a better sense, check out the new documentary ‘Untitled’ when you can on what Dave did through Covid. Should be available via streaming soon. He helped a lot of people. That’s the kind of person he is.

The “press hit job” Yang referred to were reports that Chappelle’s spokesperson confirmed about an unannounced visit Chappelle made to the school on November 23, with his own camera crew and tickets for his “Untitled” documentary in tow. He bought Thanksgiving meals for the entire Duke Ellington school community.

However, when over 580 students packed into the school’s auditorium to talk with the comedian for about an hour, things got heated between the high schoolers and the 48 year-old. One student called Chappelle a “bigot,” adding, “I’m 16 and I think you’re childish, you handled [criticism over your transphobic remarks] like a child.”

Chappelle replied, “With all due respect, I don’t believe you could make one of the decisions I have to make on a given day.”

Students said that Chappelle belittled their questions and comments by laughing at them and responding with jokes. He also used the n-word when one student said that his transphobic tropes contribute to the death of transgender people. Chappelle said that Black people are killed everyday. One parent expressed outrage over the school tolerating such language, regardless of the speaker.

Chappelle also bragged to the students, “I’m better than every instrumentalist, artist, no matter what art you do in this school, right now, I’m better than all of you.” He claimed some of them would be “household names” one day, but for now, he remains “better” than all of them because of his success.

The comedian’s spokesperson confirmed the reported comments, and issued a statement saying, “[Chappelle] said these kids deserve an F for forgiveness. Give them some space to grow. They are going to say things that are immature.”

Chappelle’s visit to the school came right after it was announced that Duke Ellington School for the Arts was postponing the renaming of their theater after Chappelle to next April.

While running for President, Yang infamously touted his “Freedom Dividend” Universal Basic Income (UBI) plan as a key part of his planned agenda. In an interview with LGBTQ Nation, he said that his plan could help LGBTQ people, but he did not address many of the non-economic issues LGBTQ people face.

He did also support the Equality Act, while saying his belief was that LGBTQ people should be protected from discrimination under the Civil Rights Act of 1964.

Now, Yang stands firmly in support of Chappelle, who has declared himself as a member of “team TERF” in his recent Netflix special, The Closer. While he has defended trans youth and trans people in the past, Yang makes no mention of the fact that they have now become the target of Chappelle’s constant criticism and mocking.

In addition to other TERFs and anti-trans advocates, Yang joins the company of other rich, supposed LGBTQ “allies” to defend Chappelle, including Channing Tatum, Jay-Z, and fellow failed politician Caitlyn Jenner.

While running for mayor of New York in 2021 — which featured a ranked-choice primary, meaning voters and political groups could support multiple candidates — Yang made awkward remarks at an event hosted by a LGBTQ political club that offended so many of its members, they chose to endorse three candidates other than him.

He claimed that with LGBTQ voters, the Democratic Party has “like, this incredible secret weapon… It’s not even secret. It’s like, we should win everything because we have you all.”

After coming in fourth when the first count of ballots for the primary were released, Yang dropped out of the race, then left the Democratic Party to become independent. He’s created a committee that intends to build their own political party, known as the Forward Party, but in the meantime supports both Democrats and Republicans that share their centrist agenda.