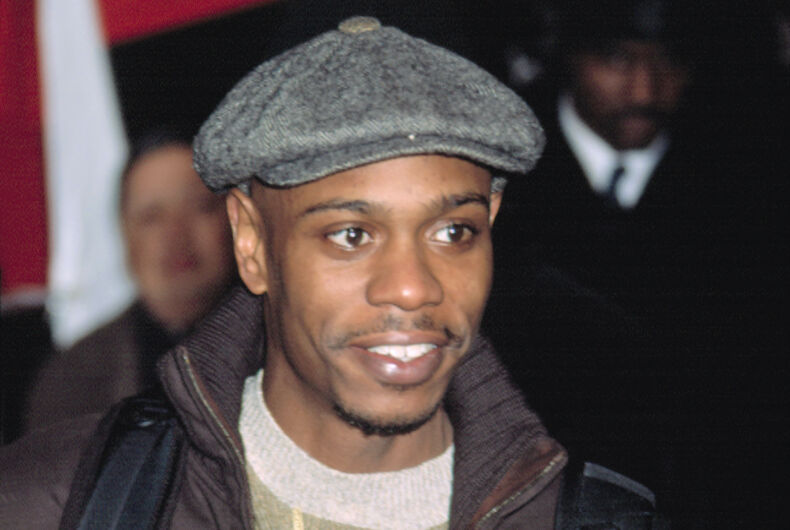 Transphobic comedian Dave Chappelle recently spoke at his high school alma mater, the Duke Ellington School of the Arts in Washington DC. While he was there, at least one student called him “childish” and a “bigot.” He responded by telling the students, ” I’m better than all of you.”

Chappelle spoke at the high school following the outcry against his transphobic Netflix comedy stand-up special, The Closer. In it, Chapelle announces that he’s a transgender exclusionary radical feminist (TERF) and launched into a derogatory diatribe about transgender women’s genitals.

About 580 students packed into the school’s auditorium to talk with the comedian for about an hour, Politico reported. One student called Chappelle a “bigot,” adding, “I’m 16 and I think you’re childish, you handled [criticism over your transphobic remarks] like a child.”

Chappelle replied, “With all due respect, I don’t believe you could make one of the decisions I have to make on a given day.” Students said that Chappelle belittled their questions and comments by laughing at them and responding with jokes.

Chappelle later told the students, “I’m better than every instrumentalist, artist, no matter what art you do in this school, right now, I’m better than all of you.” He added that some of the students would be “household names” one day.

He also used the n-word when one student said that his transphobic tropes contribute to the death of transgender people. Chappelle said that Black people are killed everyday. One parent expressed outrage over the school tolerating such language, regardless of the speaker.

While Chappelle seemed to “soften up” and become kinder to the students near the end of his talk, he singled out one female student for criticizing him and then walking out early when she had enough.

“It was a huge power imbalance of this grown man and his camera crew — and these 14- to 18 year-olds without their phones, just high school kids,” one student told the aforementioned publication.

The comedian spokesperson said, “[Chappelle] said these kids deserve an F for forgiveness. Give them some space to grow. They are going to say things that are immature.”

Earlier this year, the school announced they are temporarily postponing a fundraiser and event where the school’s theater will be renamed after Chappelle. The event will be held in April 2022.