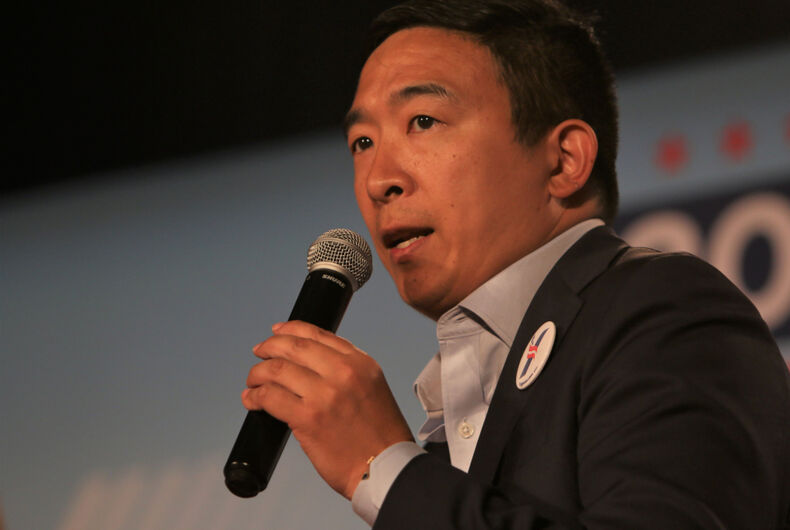 “Well, first, let me say that if I go to Cubbyhole, I think I’m going to be accompanied by at least one of my two campaign managers who are both gay,” he said in a video discussion at the meeting. “So there’s like a lot of, you know, familiarity with, with the community, at the head of my campaign leading it.”

“He came across like he was a tourist in New York and said he wanted to visit a gay bar,” the LGBTQ Democrats’ club president Rose Christ told Politico.

The millionaire businessman lost the Democratic presidential primary race to President Joe Biden. While his current campaign has garnered a lot of publicity and support, New York residents are seeing that he has an odd way with words.

Yang’s relationship with the LGBTQ community was strained during his presidential campaign as well. While he didn’t espouse negative views on LGBTQ issues, he obviously wasn’t prepared to speak to community concerns and they weren’t a priority for him.

The same problem haunted Yang during the video interviews the group held with candidates who sought their endorsement at the Stonewall Democrats event.

Yang repeatedly referred to “your community,” and focused more on his enthusiasm for going to a local lesbian bar and the annual Pride parade than substantive issues. He also touted his LGBTQ staffers as proof he is an ally.

“I genuinely do love you and your community,” he said, according to a partial recording of the remarks shared with the New York Times. “You’re so human and beautiful. You make New York City special. I have no idea how we ever lose to the Republicans given that you all are frankly in, like, leadership roles all over the Democratic Party.”

“We have, like, this incredible secret weapon,” he said. “It’s not even secret. It’s like, we should win everything because we have you all.”

“He kept calling us ‘Your community,’ like we were aliens,” club member Harris Doran told the outlet.

“When I see a candidate come in just with Michael Scott levels of cringe and insensitivity, it either tells me Andrew Yang is in over his head or is not listening to his staff,” Alejandra Caraballo, who also attended the meeting, added. “Those are both radioactive flashing signs that say he is not prepared to be mayor of New York.”

Michael Scott is the notoriously incompetent character played by Steve Carell on The Office.

In an interview with LGBTQ Nation before Yang dropped out of the primary, he spoke primarily about his “Freedom Dividend” plan to pay everyone a universal basic income. Yang mostly ignored the issues facing the community; instead, he tried to sell his plan as beneficial to LGBTQ people.