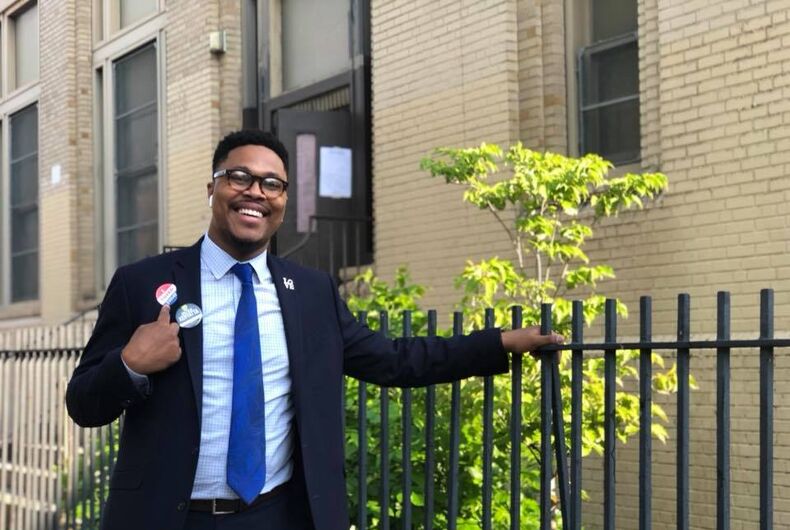 Outside of the runoff elections happening in Georgia on January 5th, there are no scheduled major elections being held in 2021. (Thank goodness.)

But, the agenda for politicians around the country remains stacked. Across the country, thousands of local and state-level officials are sworn in, set to begin new terms. Today, new members of the U.S. House of Representatives and U.S. Senate will be able to take their seats, and the new 117th Congress will begin. And, of course, on January 20th, we will be inaugurating a new President in Joe Biden and Vice President in Kamala Harris.

There are more out LGBTQ politicians elected than ever known before, and they will no doubt make waves at some point through the new year. Selected officials representing those politicians are no exception.

Here’s at least 10 headline-makers to watch for in a year that will hopefully see more progress for LGBTQ people, both socially and in governance.

Without many national or other high-visible races scheduled to go on in 2021, the race to determine the next mayor of New York will provide most of the political drama over the next few months, and will signal what future elections will look like in Democratic-majority locales.

Like the Presidential election was, the election to replace Mayor Bill de Blasio is crowded. Former Presidential hopeful Andrew Yang is already among the frontrunners so far.

Besides supporting universal basic income, Yang is a supporter of LGBTQ rights and hopes that Congress will pass the Equality Act. “Cultural attitudes can evolve very quickly, we saw it with gay marriage and I’m hopeful that we’ll see it with the Equality Act as well,” Yang told LGBTQ Nation in an interview as a Presidential candidate in November 2019. “To me, it’s unconscionable that sexual orientation is not a protected category under our existing Civil Rights Act.”

Another reported champion of LGBTQ rights in the race is City Comptroller Scott Stringer. Congressman Max Rose, a noted advocate — who lost his seat overseeing Staten Island and Brooklyn to a Republican this fall — is considering a run as well.

There are out candidates as well. Carlos Menchaca, a city councilman who was the LGBTQ and HIV community liaison to former out City Council Speaker Christine Quinn, would be NYC’s first gay and Latino mayor. Non-binary Brooklyn rapper Paperboy Prince has also announced their run and is advocating for cancelling rent, among other positions.

Out City Council Speaker Corey Johnson was a top contender, but withdrew in advance of the race, amid backlash over his position on police funding. Johnson cited his depression as a reason he wouldn’t run.

Senator Wiener has already proposed several state laws and declarations that have made California one of the most progressive states in LGBTQ equality across America. Examples include ensuring that California keeps data on how COVID-19 affects the LGBTQ community, making the treatment of LGBTQ sex offenders the same as any other sex offender, and pushing for the late Bayard Rustin’s eventual pardon by the state over a past sodomy conviction.

Wiener, who is out, was a San Francisco Board of Supervisors member prior to becoming a state senator.

Alex Padilla, who will replace Kamala Harris in the Senate

Padilla is not out, but has a clear record of advocating for LGBTQ rights and equality. He was tapped by Gov. Gavin Newsom to serve the rest of Vice President-elect Kamala Harris’s term in the Senate, which expires in January 2023.

As California Secretary of State, he oversaw California’s elections, business operations, and public or political agendas. In that role, he went out of his way to work with LGBTQ organizations and further support LGBTQ rights under Newsom’s agenda. He is a “decades-long” associate of Gov. Newsom.

As an LGBTQ advocate, Padilla is going to follow in even bigger shoes, as Harris pushed for LGBTQ rights in legislation as a Senator, in addition to on the campaign trail.

Along with Congressman-elect Ritchie Torres, Mondaire Jones is one of the first out gay Black men ever elected to Congress. He will represent New York’s 17th district, and is focused on fighting for low-income communities, communities of color, and LGBTQ people.

In November, the out politician was selected to be the Freshman Representative to Leadership, considered the “most influential role available to a freshman member of Congress.” He will meet weekly with party leaders and will serve as the spokesperson for the 15-member incoming group of newly elected representatives in the Democratic Caucus.

Katie Hill was a U.S. Representative from the state of California, and the first out bisexual lawmaker elected to Congress, when an attempted blackmail scheme uncovered her consensual relationship with a staff member, spurring her to resign in October 2019. Several days after she announced her resignation, the British tabloid The Daily Mail also published naked pictures of her.

In her resignation letter at the time, Hill said “hateful political operatives” and her “abusive husband” leaked photos of her and that media outlets would “happily provide a platform to a monster who is driving a smear campaign built around cyber exploitation.”

She also wrote a book in 2020 entitled She Will Rise: Becoming a Warrior in the Battle for True Equality.

McBride, who was the National Press Secretary for the Human Rights Campaign, will be a state senator representing Delaware’s first district and is focused on criminal justice reform, equal access to education, affordable healthcare, and increased access to paid medical leave.

“Time and time again, I’ve had the opportunity to see there is space for people of all different backgrounds, including trans people, in our politics,” McBride told LGBTQ Nation in February 2020.

Her election slated her to become the highest-ranking trans politician in governance throughout the United States. And, she’s already shown a knack for smacking down trolls and haters.

Hope that clears things up. pic.twitter.com/6JjBjG4QAO

Jared Polis is still governing, even while he and his husband Marlon Reis contracted and battle COVID-19, leading to Colorado’s First Gentleman being admitted to the hospital. He has since been discharged.

Polis believes that despite a new strain of coronavirus being found, Colorado’s COVID-19 severity “has been in a sustained decline.”

Despite receiving hate from constituents and peers in governance, Polis has worked hard to ensure that Colorado is no longer considered the “hate state.”

“We really went from a place where discrimination was legalized in the 1990s to where we are today, where Colorado is a leader,” Polis said in July, referring to Amendment 2, which banned local governments from passing laws that protected people from discrimination based on sexual orientation in 1992.

Malcolm Kenyatta was the first out person of color to be elected to Pennsylvania’s legislature, and one of 17 Democratic “rising stars” to co-deliver the keynote address at the 2020 Democratic National Convention this past August.

Then, he was picked by his party to be one of 20 electors in the state’s certification of the 2020 election results in Pennsylvania.

Even President Barack Obama took a moment at a Biden campaign event in Philadelphia to call Pennsylvania Rep. Malcolm Kenyatta’s hair “sharp” – and a step forward — in October.

Karine Jean-Pierre, who once boasted that she was “everything that Donald Trump hates,” was assigned to be chief of staff to Kamala Harris during the 2020 general election, putting a lesbian in one of the Biden-Harris campaign’s most senior positions.

After being considered a “top contender” for White House Press Secretary in selections for Biden’s “most diverse” cabinet, she was instead appointed to the nearly as prestigious role of the principal deputy press secretary for the White House. Jean-Pierre will be at the forefront of conveying Joe Biden and Kamala Harris’s message to the American people and beyond during the start of their administration.

After being considered for several positions within the Biden administration, out former Presidential candidate Pete Buttigieg was selected as the Secretary of Transportation. Once confirmed, he will become the first out cabinet-level official in the history of the United States. (Richard Grenell, a Trump temporary appointee as Director of National Intelligence, was an acting official and was never confirmed to that position.)

His addition to the administration, which Biden pledged would be the “most pro-equality administration” ever, is no surprise. According to D.C. gossip, Buttigieg was also under consideration for Secretary of Commerce or Housing and Urban Development, U.S. Ambassador to China, and Veterans Affairs. He reportedly wanted to be the U.S. ambassador to the U.N., but veteran diplomat Linda Thomas-Greenfield has already been named to that position.

Buttigieg is the only former 2020 presidential candidate to earn a spot in the Biden administration so far.

His job as transportation secretary won’t be an easy one. As the nation has limped through the coronavirus pandemic under President Trump, Buttigieg will be responsible for planning a way to rebuild America’s infrastructure – from rebuilding deteriorating highway, rail, and air systems to salvaging urban transit agencies like New York City and Washington DC’s subway systems.

He will oversee more than 55,000 employees – roughly half the number of people who live in South Bend, where he was once mayor – if confirmed to the position by the Senate.

“In a Biden administration, we can look forward to the federal Equality Act [being passed] and everything that comes with the mechanics of that,” Buttigieg exclusively told LGBTQ Nation right before the election. “We can expect to see that four years from now there will be more balance than there is right now and very specific things about international adoption, equality in health care, guidance to schools that’s trans-inclusive, data gathering, and immigration.”