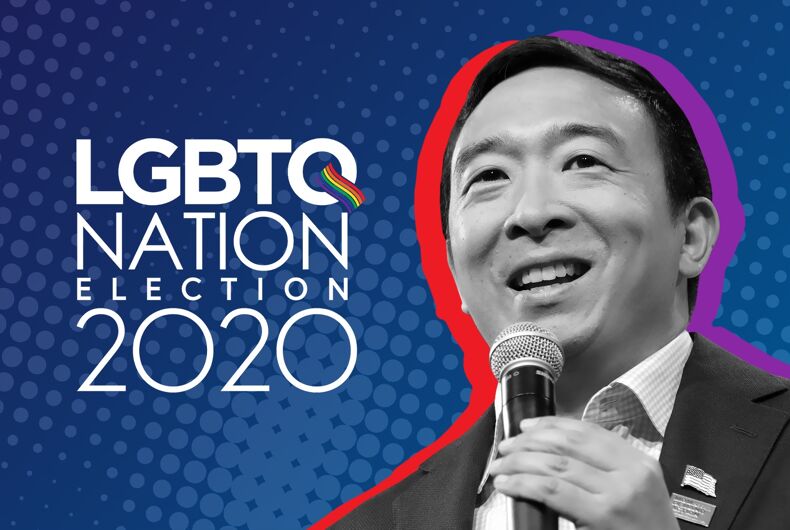 LGBTQ Nation’s coverage of the 2020 U.S. Presidential Election includes interviews and perspectives highlighting the stakes and important issues facing the next President of the United States.

Theories abound explaining the underlying sociological conditions that led to the rise of Donald Trump, renewed political divisiveness, and increased public expressions of intolerance toward marginalized groups, including LGBTQ and, especially, transgender Americans of color.

But reasons ranging from toxic social media culture to the demise of the mainstream media to Russian propaganda don’t feel entirely satisfactory.

Related: How will identity politics play in the 2020 presidential campaign?

The plethora of candidates for the 2020 Democratic presidential nomination has generally stuck to similar prescriptions for healing these deep cultural and political wounds, from support for LGBTQ civil rights protections to toughening hate crime laws to include trans-Americans to expanding access to health care.

Andrew Yang has a very different diagnosis of the problems and, as a result, platform for change. The New York Democrat and tech entrepreneur has pinned his underdog presidential campaign on what he’s dubbed the “freedom dividend,” a universal basic income plan which would guarantee $1,000 each month to every American citizen for life regardless of income or circumstances.

Yang believes that alleviating poverty not only helps the victims of poverty and those who might one day sink into it, but that economic security also makes people smarter.

In fact, a 2013 Harvard study tested how two groups of people, shoppers in a New Jersey mall and farmers from Tamil Nadu, India, performed on IQ tests. The study concluded that the mental energy devoted to dealing with income inequality reduces how well people perform on cognitive tests. The same people taking the same test in more prosperous times, such as the farmers after harvest, performed better on tests of mental functioning.

“So if you have the suspicion that Americans are getting less reasonable, less rational, less optimistic, and more openly hostile to other Americans, we almost certainly are, due to the fact that pervasive financial insecurity is the new normal,” Yang told LGBTQ Nation in an exclusive interview. “If we changed that, I believe we can make more rapid progress on passing the Equality Act and other landmark legislation that, again in my mind, is overdue.”

Yet Yang was eager to go into detail for the first time about how the Freedom Dividend will benefit the queer community, and how to put some momentum behind the long moribund Equality Act, federal legislation would ban sexual orientation and gender expression discrimination. And his proposal could find a receptive LGBTQ audience, which – due to discrimination, harassment, and violence – struggles disproportionately with poverty, joblessness, and homelessness.

However, nothing in the Harvard study indicates that people become less bigoted when their economic anxiety eases. Even if it proves to over the long run, there’s still the short-term reality of Republican filibusters and vetoes that are not going away any time soon.

Yet this is Yang’s proposed path to passing civil rights legislation.

“Cultural attitudes can evolve very quickly, we saw it with gay marriage and I’m hopeful that we’ll see it with the Equality Act as well,” once the universal basic income becomes law, he insisted. “To me, it’s unconscionable that sexual orientation is not a protected category under our existing Civil Rights Act.”

He said basic income would make the community stronger as well, more able to fight for its rights.

“We all also know that LGBTQ community members suffer from higher stress levels and more mental health and emotional issues as a result of some of the circumstances,” he said. “One of the things that a staffer said to me is that our freedom dividend would be a game-changer for members of the community because it would help make it easier for people to leave environments that are unsupportive or hostile or even dangerous and move to environments that are more welcoming and supportive.”

Indeed, nearly 40% of homeless youth identify as queer, mainly as a result of un-accepting parents who make them feel unwelcome at home or kick them to the streets. A large percentage of queer homeless youth are transgender, adding to their marginalization and parental rejection can set LGBTQ people up for a lifetime of struggle with poverty, addiction, and mental health issues.

It is also true that transgender people are more likely to be unemployed, and a whopping 34 percent of black trans women face housing insecurity compared to just nine percent of non-black trans people.

While he’s made disparaging remarks about so-called “identity politics” in the past, Yang seems to have recognized that many of the issues specifically faced by LGBTQ people often take on a significant economic impact, heightening the need for his basic income plan.

“For better or for worse, I tend to look at many things as at least related to economics,” he said. “Gay marriage is, in part, an economic issue. I think when you look at any group that’s marginalized, economic marginalization is always a big aspect of it and you can see it with LGBTQ community members, where a lot of it involves getting pushed out of places of employment, not getting hired, not getting promoted, not getting raises.”

“And also, in some cases, extra expenses that can include even, in some cases, things like surgery that might not be covered by existing insurance. And so, to me, in some ways the economic issues are more direct and concrete and are easier for us to address.”

While passing the Equality Act and providing a basic universal income would be a huge step forward, there would still be many repressive and discriminatory Trump-era administrative rules to undo. Yang promises to wipe those rules off the books as quickly as possible.

“A hundred percent yes,” he said. “I can’t imagine it would take me my entire first term. I thought you were going to say first week and I would’ve said yes to that, too.”

Though Yang claimed he had previous commitments that forced him to miss the LGBTQ presidential events earlier in the primary campaign cycle, Yang is adamant that he wants to make the country feel welcoming – physically and economically – for all Americans, regardless of identity and compares LGBTQ people’s plight to his own racial background.

“I grew up the skinny lone Asian kid in my town, who skipped a grade and always felt out of place,” he recalled. “My parents immigrated to this country, so I feel like I have a sense of what it’s like to be marginalized in at least a particular way. My instinct is to do right by Americans who feel like they’re not at home.”

“I know what it’s like to be on the outside and my administration will do everything in its power to try and make all Americans, but LGBTQ Americans, in particular, feel like this country is for all of us.”