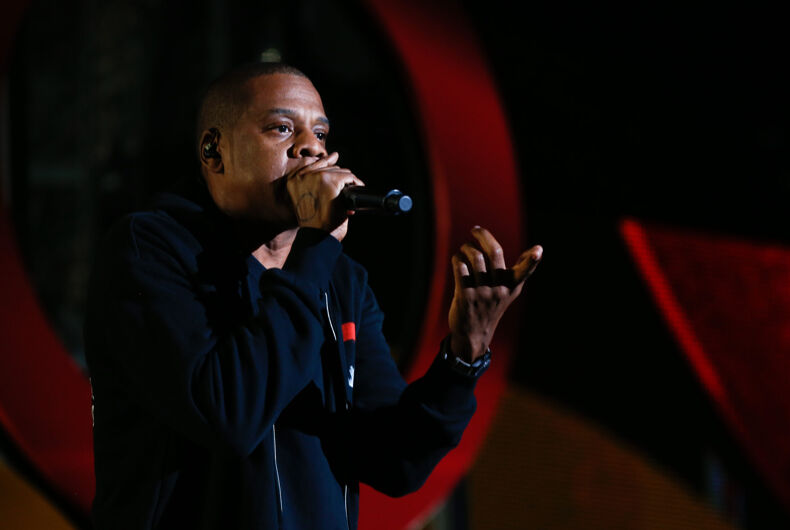 Rapper and business mogul Jay-Z has entered into the controversy surrounding his friend Dave Chappelle and his most recent comedy special The Closer, where Chappelle declares himself to be a Trans-Exclusionary Radical Feminist (or “TERF”) and ridicules LGBTQ people.

Jay — who has received two honorary awards from the LGBTQ advocacy organization GLAAD, alongside his mother, Gloria Carter and wife Beyoncé — recently had his Rock and Roll Hall of Fame induction delivered by Chappelle. Then, in a recent Twitter Spaces conversation promoting the Netflix film The Harder They Fall, Jay-Z addressed his thoughts about the comedian directly.

“I think that Dave is super brave and super genius,” Jay said in portions of the conversation recorded and shared online by listeners. “If you spend time with him, he’s brilliant.”

Prompted by a question by Vulture music critic Craig Jenkins, Jay acknowledged, “I think he pushed a lot of buttons,” before making sounds that signaled his discomfort watching some of Chappelle’s material, although he did not specify what material or what about it made him feel that way.

He then pivoted to discussing his view that people fail to have “dialogue” with people they disagree with. “These algorithm and these things on these [social media] sites allow you to talk to people that agree with you,” he said, “I think we have to speak with one another when we disagree. That’s how we get to the bottom of it, that’s what therapy is.”

Jay-Z claimed that anything that doesn’t help people “deal with yourself in a real way” and “doesn’t have that tension” is “not gonna be real” and equivalent to a “fake conversation.”

He used the example of how America dealt had not addressed much of the racism and bigotry ongoing today until Donald Trump was elected to the White House.

“Then we really got to see people for who they really were, and then we got to have real conversations,” he said, before digressing by saying, “not to get so political about it.”

“It’s inherently a political special, I feel like, so it’s fair,” Jenkins responded. He then followed up, “You don’t feel like it was divisive though? Just curious.”

“I don’t… just so, I don’t want to answer for Dave Chappelle… so I’m not speaking specifically to his work, [but] I think great art is divisive. It is. Some people like it, some people hate it, and some people, y’know — whatever. When you’re making great art, you have to be fearless and something that you believe in. That’s what it’s about.”

Jay-Z and Chappelle have had a friendship spanning nearly 15 years, as Chappelle shared in his remarks at the induction ceremony.

In an interview dating back to 2017, Jay suggested Chappelle when asked about people in leadership in America that speak for his values, after discussing the issues President Barack Obama faced in the White House.

In the sit down for T Magazine with the New York Times’ executive editor Dean Baquet, the rapper said, “This is going to be funny, I find it funny, but I like Dave Chappelle’s leadership, because he tells it in humor so you can deal with it, but there’s always a nice chunk of truth in there.”

At the induction ceremony last week, Chappelle began his speech honoring Jay by snidely remarking, “I would like to apologize… I’m just fucking with you,” before balking to the cheers of the fans in attendance.

“When he said. ‘this is Jay everyday,’ when he told us he’d ‘never change,’ You heard this and you probably said as a white person, ‘Well, maybe this guy should focus on his development.’ But what we heard is that he’ll never forget us. He will always remember us. And we are his point of reference,” Chappelle said at the ceremony on October 30, which will have highlights broadcasted on HBO on November 20.

Chappelle also mentioned Jay’s mother, Gloria Carter, in the remarks, who is an out lesbian. “You can’t ignore the people that are with him…Jay Brown, Ty Ty, his mother. These people that protected him and kept him safe and kept him sane while he made the ascension through American life,” the comedian said.

You've seen (parts of) his awesome speech on stage. But you didn't get to see the pure happiness – and just total positivity of JAY-Z behind the scenes. Here is one of our favorites.

Photo by Kevin Mazur/Getty Images for The Rock and Roll Hall of Fame pic.twitter.com/LQN1ifXe41

In his comedy special The Closer, also released on Netflix, which caused the latest controversy for which he pretended to apologize for, Chappelle declares himself to be “team TERF” and complains about the sociopolitical imbalance he believes there is between LGBTQ people and Black people.

“In our country, you can shoot and kill a n****r, but you better not hurt a gay person’s feelings!” he claimed.

“I don’t hate gay people at all. I respect the shit out of you,” he also said in part, before clarifying, “Well, not all of you…”

He bragged, in part, about getting into an altercation with a butch lesbian, proclaiming, “I whooped the toxic masculinity out of that bitch!”

Despite promising that he “is over” making jokes about “LBGTQ, LMNOPQXYZ people,” he has repeatedly made public appearances and continued making remarks decrying the outlash from the special and telling “the transgender community” that they cannot and “will not summon me.”

Still, despite aligning himself with anti-trans advocates, Chappelle says his issues are not with the LGBTQ community. “Do not blame the LGBTQ community for any of this,” he told an audience at a recent show, “It’s about corporate interests, and what I can say, and what I cannot say. For the record, and I need you to know this, everyone I know from that community has been loving and supportive, so I don’t know what this nonsense is about.”

Meanwhile, trans employees at Netflix have denounced the company’s decision to publish the special, and staged a walkout protest two weeks ago over it. Two of those employees, one since fired and one suspended before it was reversed, have since filed a grievance against the company for retaliation against them.

Jay-Z, born and legally known as Shawn Carter, has advocated for LGBTQ equality publicly for a decade and received recognition for it, especially since his mother, Gloria, came out publicly in 2017 with an appearance on Jay’s song “Smile,” included on the album 4:44.

GLAAD recognized Jay-Z after the song’s release with a Special Recognition Award in 2018. At the 29th Annual GLAAD Media Awards on May 5, 2018, Gloria accepted the award on his behalf.

Then, Jay-Z and his wife, music superstar Beyoncé, received GLAAD’s Vanguard Award in 2019 at the 30th Annual GLAAD Media Awards. “We would like to request that we continue to shift the stigmas in this community,” Beyoncé said while accepting the honor. “Especially the stigmas in black families towards accepting queer black and brown men and women around the world.”

Jay thanked his mother while accepting, thanking her for “spreading love and acceptance and her beautiful speech at the end of the song — and for allowing me to tell her story.”