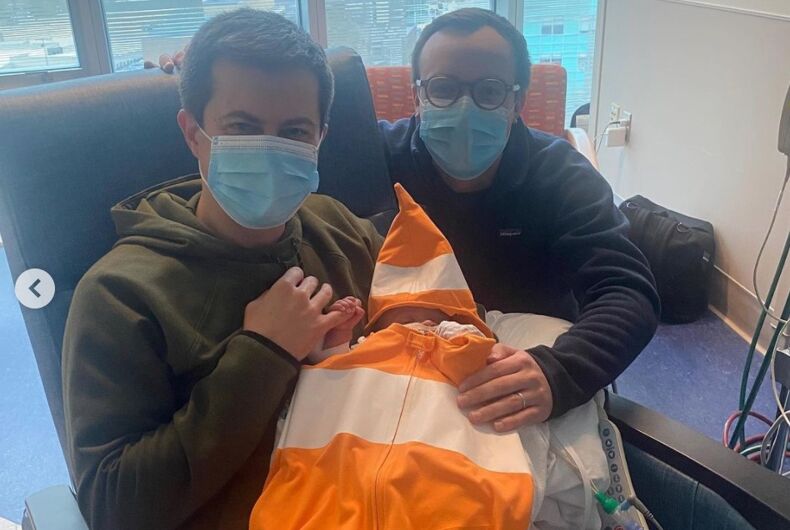 Out Secretary of Transportation Pete Buttigieg and his husband, Chasten, have announced that their son Joseph August — or Gus — is safely recovering at home after being treated in the hospital for multiple weeks following his birth along with his sister, Penelope Rose. Both children caught a “respiratory virus” not related to COVID-19, Pete shared today.

“After 3 weeks in and out of hospitals, 125 miles in an ambulance, and a terrifying week on a ventilator, Gus is home, smiling, and doing great!” Chasten said in a tweet issued yesterday.

On Halloween, the couple revealed, with a picture sharing Gus’s costume as “twinfrastructure,” that the family was in a hospital, because “Gus has been having a rough go of it but we’re headed in the right direction.”

Now, Chasten has shared that Gus has made it home, and that the Buttigiegs are “so relieved, thankful, and excited for him and Penelope to take DC by storm!”

After 3 weeks in and out of hospitals, 125 miles in an ambulance, and a terrifying week on a ventilator, Gus is home, smiling, and doing great! We’re so relieved, thankful, and excited for him and Penelope to take DC by storm! Thank you so much for all of the love and prayers.

He also shared a heartfelt message thanking “the countless medical professionals who helped Gus (and his dads and sister) along the way. We are so grateful for your tenderness and care.”

Chasten also gave his thanks to “everyone who posted stories from their NICU/ PICU stays… Those were so comforting during such a scary time,” he wrote. “Thank you for helping us feel less-alone amidst all of the the anxiety and uncertainty.”

And to everyone who posted stories from their NICU/ PICU stays, thank you so much for sharing with us. Those were so comforting during such a scary time. Thank you for helping us feel less-alone amidst all of the the anxiety and uncertainty.

“Thankful, relieved, and reflecting a great deal on the mixture of joy, terror, and love that is parenting,” Pete added in his quote tweet.

Thankful, relieved, and reflecting a great deal on the mixture of joy, terror, and love that is parenting. https://t.co/klA9hbhhOb

With President Joe Biden’s infrastructure deal passing last night as well, Pete was back at work today, making appearances on various cable shows and celebrating the agenda’s victory which he contributed much to with his tireless advocacy for its passing.

He shared an update in appearances both on CNN and on FOX News this morning.

“He’s eating, he’s smiling, and we’re just so thankful for the great medical care that he got and the love and prayers and support that came our way during a tough stretch,” Pete said of Gus to CNN.

Pete told FOX’s Neil Cavuto, “Both of them were hospitalized with a respiratory virus — not COVID, but another one that if you or I got it, it’d be like a cold, but a premature child gets it, it’s serious business.

“She got better, he got worse, and we went through something that you wouldn’t wish on any parent, but again, the best thing, the best news is they’re home and doing great.”

Along the way, others working at the White House praised Pete’s efforts and welcomed news about Gus’s health.

Huge kudos to @SecretaryPete for all he did to make this possible https://t.co/ThfnFRm9gH

As many have said–its like your heart is living outside of your body (being a parent) so happy to hear the great news about baby Gus and of course for sister Penelope to have her life long buddy by her side. https://t.co/sLPOXfeqxL

These investments are a huge deal for the American people. Take it from a guy who likes trains almost as much as I do: pic.twitter.com/37L2gnShpT

Several others, like Andy Cohen and Kathy Griffin, took time to send well wishes and positive messages to the Buttigieg family, who only welcomed Gus and Penelope less than two months ago.

Glad he is ok!

I really don't know how you did it. Working on these pressing issues for the country and batting for the President's agenda while living such a dreadful personal crisis.
Thank God for you and your family. You are blessed!

You have totally modeled grace, class, and strength during this time. We all have your 6, sir.

Wonderful news, glad he is doing so well now.

Thinking of you guys and sending healing love your way. 🙏❤️🙏