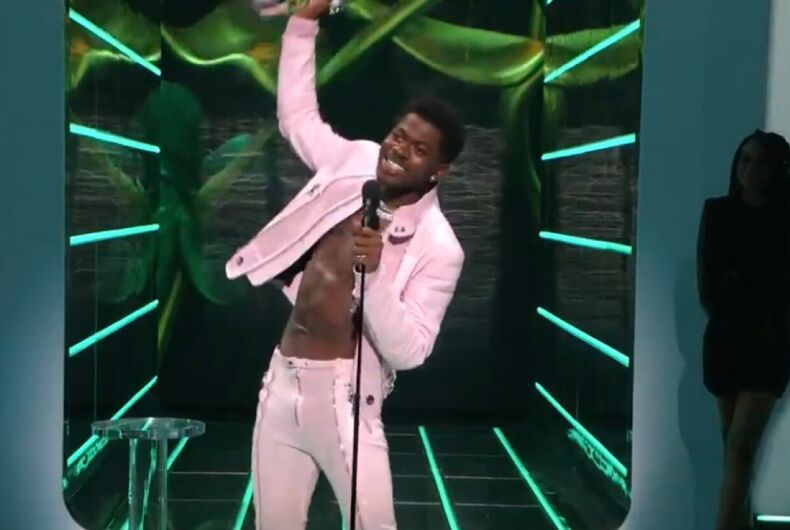 Content warning: This article mentions slurs and directives for a person to commit suicide.

Lil Nas X’s father, Robert Stafford, has made it clear he won’t tolerate any hatred toward his son.

Stafford recently stood up for Nas after rapper Boosie Badazz went on a homophobic Twitter rant about the “Industry Baby” singer and even suggested Nas kill himself.

Related: This ad is being called the “Gayest Commercial of 2021”

Twitter has since removed the tweet, which Badazz wrote in response to a joke from Nas claiming he had a collaboration with Badazz in the works.

But Stafford wasn’t taking Badazz’s comments sitting down and blasted the rapper on his Instagram story.

“How the hell you’re a gangsta rapper promoting drugs, gun violence, degrading women and getting high every video talking about you’re for the kids man sit your old man looking ass down,” he said, according to PinkNews.

Badazz responded to Stafford with another offensive tweet, writing, “Dont get mad at me cause your son came out like that lol I know it hurts.”

This is one of many times Stafford has stood up for his son in the face of hate. In July, he responded to homophobic comments from DaBaby Instagram, writing, “Bruh sit down you had your time.”

And in April, after Twitter trolls blamed Nas for his mother’s addiction, Stafford again took to Instagram and wrote, “Despite what people say @lilnasx is the greatest kid a parent can be BLESSED with. Although his mom is in a struggle with an addiction she’s STILL a QUEEN and he goes through great lengths to make sure we’re taking care of.”

After Nas released the video for “Montero (Call Me By Your Name),” he posted a very supportive text from Stafford that read, “very creative video. I got through it,” with laughing emojis. Stafford then added, “Congratulations. Live life on your terms. Very PROUD of you.”

This is also not the first time Badazz — who was arrested earlier this month in Georgia on charges of second-degree criminal damage to property, inciting a riot, disorderly conduct, and criminal trespassing — has attacked Nas.

Badazz has claimed Nas is trying to indoctrinate children, and in July, called him a “faggot” in defense of rapper DaBaby after his own controversial, anti-gay comments.

In 2016, Badazz complained that people are supposedly trying to force children to become gay, saying, “Gay stuff is everywhere and I think they’re doing it just trying to do it to make monetary gain.”

For months in 2020, Badazz went on a series of rants attacking Zaya Wade, Dwyane Wade’s daughter, after her family revealed she had came out as transgender. In May, he revealed he hired a sex worker to give oral sex to his son and nephews when they were 12- and 13-years-old. He called this “training these boys right.”

Did Donald Trump scam Marjorie Taylor Greene out of thousands of dollars?