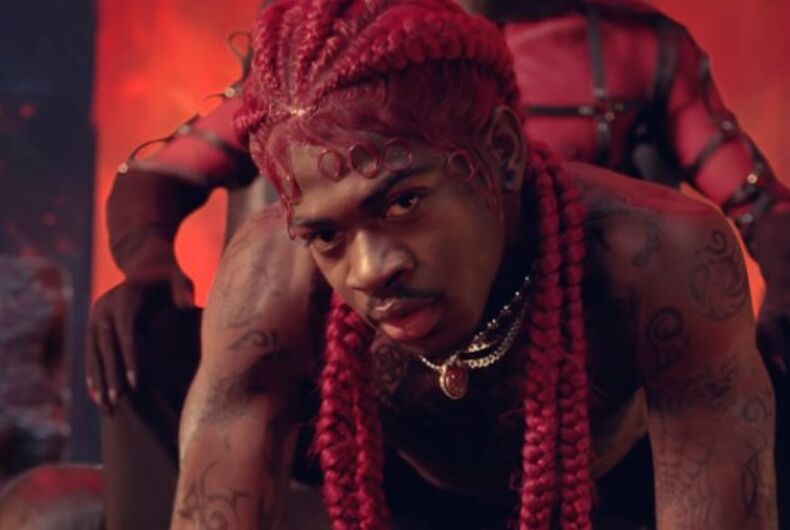 Lil Nas X in "Montero (Call Me By Your Name)"Photo: Screenshot

Many took the opportunity this weekend to bash Lil Nas X over the music video for his latest single, “Montero (Call Me By Your Name)” — and his subsequent release of similarly-themed unofficial “Satan Shoes.” In the music video, he used gay and religious imagery, including a scene where he wears underwear and stiletto boots and gives the devil a lap dance.

Lil Nas X spent much of the time mocking the people who were outraged, but there was at least one opinion shared that was fueled by love. Lil Nas’ dad, Robert Stafford, even complimented the “very creative video.”

Related: The “Call Me By Your Name” author loves that Lil Nas X named the song after his book

Nas lived with Stafford in Austell, Georgia during his childhood for a time after his parents split apart. According to TIME, Nas came out to his father — known professionally as R.L. Stafford — just a month before he publicly came out in June 2019 at 20.

This isn’t the first time the star’s dad has come out in support of him.

Stafford is known for recording Christian music and released the album One Man, One Mic, One God in 2018. Yet, he still appears to respond positively to his son’s most recent success using Satanic imagery.

In a screenshot the out musician posted on Twitter the day the song and video came out, he shared a text from his dad that read, “very creative video. I got through it,” with laughing emojis.

“Congratulations. Live life on your terms,” he told Nas.

“Very PROUD of you.”

The message was shared with adoration throughout the internet. Many commented how rare it is to see or read family members of out entertainers expressing positive, prideful remarks.

Kaitlin Bennett, a right-wing activist known for carrying an AR-10 rifle at Kent State University and several other college campuses in open-carry states, tried to bring out a racist stereotype in an effort to attack Nas and his dad’s tweet only shut her down.

“It’s [a] week like these that I’m thankful to be blocked by Lil Nas X,” she said, including a screenshot of her inability to view Nas’s profile on Twitter.

“i still see ur tweets shitty pants,” he said in response, referring to an incident where Bennett passed out and defecated at a party, which went viral online.

In response, Bennett said, “Do you still see your dad?” resorting to the stereotype that Black people, especially queer Black people, don’t have fathers or father figures in their life. Bennett couldn’t see Nas’s tweet about his father earlier, which might have given her the opportunity to avoid sticking her racist foot in her mouth.

Nas tweeted back “yep,” while adding, “and i might f*ck yours.”

Bennett then claimed that this is equivalent to a “threat” by Nas to rape her father, trying to elicit outrage over their online “feud.”

Lil Nas just threatened to rape my dad. Sounds about what I'd expect. pic.twitter.com/zQFdSB1oa2

Not only does he see his dad, his dad was PROUD of his gay son and his work. To me, it reeked of the stereotype that black men can’t possibly accept, love and be proud to be the parent of a gay son. That girl literally always has the shittiest take. 💩💩💩💩💩🏳️‍🌈✊ https://t.co/yMTuQUrh7f

A celebrity with a supportive family?? pic.twitter.com/CaGZjQ5Ie2

My dad would beat me to heaven than to hell and back if I did this. pic.twitter.com/1rW89Slv2m

God… i see what you’ve done for the others… pic.twitter.com/D8UkRnOkGC

your dad when he said “I got through it” pic.twitter.com/XUrSduQcKb