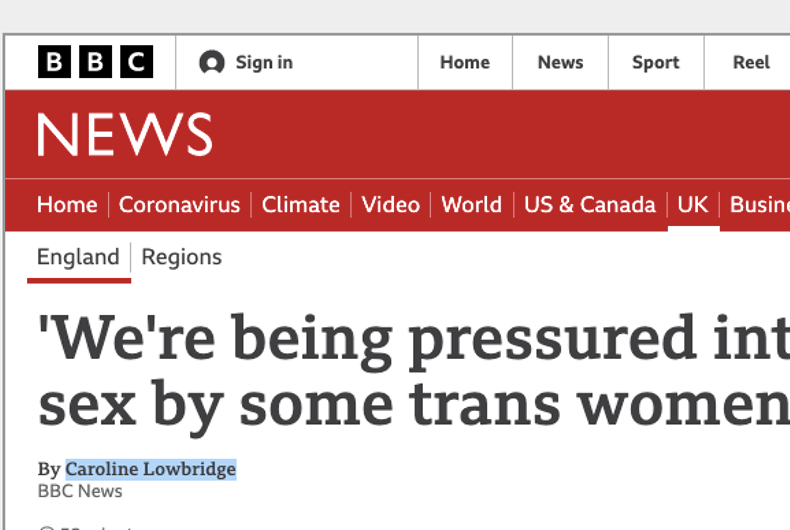 The BBC is receiving a huge backlash for publishing an anonymously sourced article that quotes transphobic hate groups to claim that transgender women are threatening and shaming lesbians into having sex with them. LGBTQ organizations say that the article could be used to deny transgender rights by relying on the stereotype that trans women are sexual predators.

A BBC article is entitled “We’re being pressured into sex by some trans women” and was written by Caroline Lowbridge, who discussed a “study” of lesbians recruited by an anti-trans organization who claimed that they feel pressured to have sex with trans women – even if they’re already in relationships with cis women – out of fear of being called transphobic.

One woman claimed a trans woman pressured her into having sex when she was drunk and couldn’t “have given proper consent.” Another said a trans woman raped her. Yet another compared dating trans women to being forced into “conversion therapy” to change one’s sexual orientation.

The article cited an anti-trans lesbian group called Get the L Out! which ran a small survey of 80 women already affiliated with the group. The critically flawed study found that 56 percent of respondents reported being pressured or coerced to have sex with a trans woman.

Another woman in the article acknowledged that pressuring cis lesbians to have sex with trans women is an “extreme” view that doesn’t “reflect the views of trans women she knows in real life.”

The CEO of the U.K. LGBTQ group Stonewall provided a quote for the article stating that anyone who writes off an entire group of people should consider how “societal prejudices may have shaped your attractions.”

When asked about the article, the BBC told Pink News that the topic is a “complex subject” and that the article “went through our rigorous editorial process” before being published.

“It is important that journalism looks at issues – even where there are strongly held positions,” the BBC said, defending the article. “The BBC is here to ensure debate and to make sure a wide a range of voices are heard.”

The pro-trans watchdog group, Trans Media Watch (TMW), noted that some of the tweets quoted in the article were part of a “false flag” campaign intended to vilify the trans community as pressuring others into having sex with them.

The TMW wrote of the report, “Either the BBC have failed to do due diligence on this story – or the team producing this story have knowingly colluded in a disinformation campaign targeted at trans people… Irresponsible reporting like this is dangerous. It significantly and adversely impacts trans people’s day-to-day lives.”

An open letter opposing the BBC’s article, signed by 10,378 people and addressed to the BBC’s Upper Management and Editorial Staff, says, “The clear implication of the article and its headline is that transgender women as a minority group pose a threat to cisgender lesbians, and should therefore have their rights restricted in the U.K.”

The letter slams the BBC, saying, “There is basically no evidence for the claim that this is happening in any sort of numbers that would justify generalizing this as a widespread experience.”

“The [Get the L Out] survey results come from a group who believe transgender people should not feel safe at Pride, and should have to face misgendering, slurs, and claims that they are rapists. This is not an unbiased source,” the letter continues.

“That BBC article about trans people is disgusting, I won’t share it as I don’t want to promote it. But whoever commissioned it should be ashamed,” Batchelor-Hunt wrote. “An article based on a social media poll by a group hostile to trans people with a headline that will drum up hatred is despicable.”

Evidence: a social media survey of just 80 people, only half of which actually agreed with, from a group condemned by Pride in London.

The aforementioned open letter also notes that the article doesn’t interview any cis lesbians who “are attracted to transgender women.” It also states that the BBC article perpetuates a dangerous stereotype depicting trans people as sexual predators, a stereotype used to justify violence and legislative action against trans people.

“The BBC has been continually platforming anti-trans hate groups, and anti-trans perspectives, without covering the perspectives of the transgender community themselves. This is a particularly egregious example, but it’s certainly not an isolated incident,” the letter states near its conclusion.

The author of the article reportedly deleted her Twitter account 18 minutes after her article was published. Other U.K. trans allies have begun tweeting messages with the hashtag #CisWithTheT to show solidarity with the trans community in the face of the transphobic article.

Caroline Lowbridge, the author of the horrendous BBC article today, is no longer on Twitter.
But cached tweets show that she's been working on the article for over a year.

Despite this, the article itself only speaks to three people who are supposedly affected by the issue. pic.twitter.com/Gfnkk5ELKD

By the way everyone, Caroline Lowbridge had deleted her Twitter account when I looked only 18mins after the article had gone up. Likely it was already gone. Remember this when they try to claim she was "forced off social media by abuse" later.

every single trans activist & activist group with a countering opinion to caroline lowbridge's that she reached out to for comment declined to speak with her and she still wrote it anyway and then the BBC was like yes! what amazing journalism. run it

By the way everyone, Caroline Lowbridge had deleted her Twitter account when I looked only 18mins after the article had gone up. Likely it was already gone. Remember this when they try to claim she was "forced off social media by abuse" later.

Of course, I am ignoring the main issue… that a journalist has clearly used their platform to actively seek evidence which they can use to mythologize and persecute a minority group as being a threat to women. As Judith Butler argued, its straight out of the fascists playbook. https://t.co/YbD6U77kbJ

The entire basis for THAT shameful BBC article is a social media poll that only 80 people in a self-selecting group responded to. That's not journalism. That's scraping the barrel to find something, anything, that can be used against a vulnerable group you don't like.

Trans people are being monstered exactly as gay and bisexual people always were – as would-be sexual predators, recruiters of children, defiers of biological reality, sufferers of a mental condition, creepy fetishists, and so on.

Stand by our trans siblings 🏳️‍🌈🏳️‍⚧️#CisWithTheT

#CisWithTheT currently trending at Number 4 in the United Kingdom.

Because, as nearly every poll shows (except the ones conducted amongst 80 hand-picked transphobes), the majority of cis women support trans inclusivity, but are silenced by a minority of hateful bigots.

It goes without saying that the last week has been really hard for our community, sadly so are most weeks, so while you're sharing your support with a hashtag, please do also reach out to any trans and non-binary people in your life, and check in to see how they are. #CisWithTheT

Cis lesbian here; I am not threatened by trans women using female spaces (where they belong) or using the term 'lesbian'.

What I /am/ threatened by is people constantly weaponising me against my trans sisters and policing gender non-conformity.#CisWithTheT

I am a cisgender woman and I stand with my trans friends & family.

Supporting trans women as the women they are does NOT jeopardise my rights as a woman.

News
BBC, Caroline Lowbridge, Get The L Out!, LGB Alliance, transphobia in media