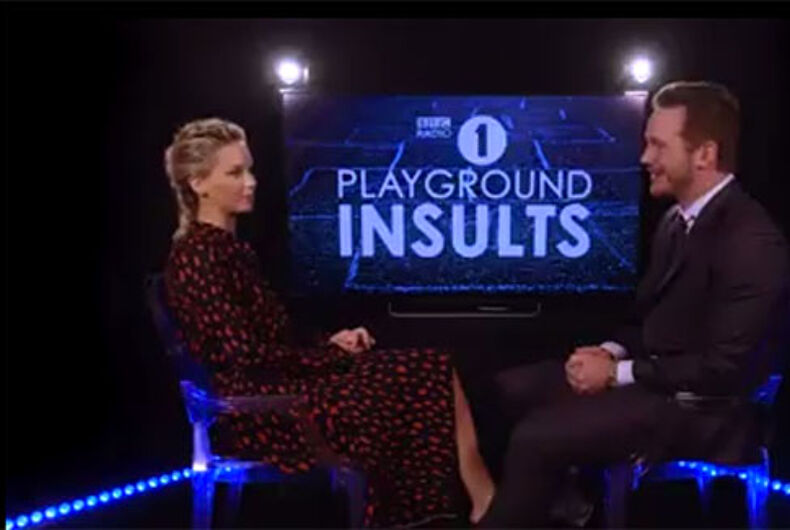 When Jennifer Lawrence and Chris Pratt, the stars of the new film, Passengers, agreed to appear on a British radio program that pits celebrities against each other in a game of schoolyard taunts, little did they know video of their trading of barbs would become the number one trending video on YouTube.

But it’s how the game is won — with a “Playground Insult” in which Pratt says he felt JLaw’s penis during their sex scene together — that concerned at least one of its viewers, a transgender woman who is a writer and has a following on YouTube of her own. Melody Maia Monet shared the video on Facebook, and wrote:

“I absolutely love both of these actors. They are both great and this was pretty funny until, bam, transphobia at the very end. I am sure it didn’t occur to either one of them that what they were saying is transphobic because we live in a society where we have been conditioned to think a “chick with a penis” joke is acceptable and funny. It is the easiest and laziest bit of humor that exists. Hardly a week goes by that I don’t hear it in some form by major media. I don’t have to frequent fringe websites or hate-filled discussion boards to hear it. It is the sort of humor that 20 years from now we will look back at and cringe with embarrassment while we lament our less enlightened past.

“For now, the beat goes on and transgender bodies were once again laughed at and held up for ridicule in another example out of innumerable variations of the same joke. A marginalized group was just marginalized a little more. If you can’t see the connection between a joke like this and how it works towards validating the more extreme feelings that lead to violence against trans women, then quite frankly, you are part of the problem.

“I’d like to think someone in major media will call out Chris Pratt for this, but I am not holding my breath.”

BBCOne promoted the show’s “hardest burns,” but left out the one Monet found offensive: “During our sex scene, I felt your dick rubbing into me.”

Watch the video below and decide for yourself.

UPDATED: Three gay soccer players in talks with The Football Association about coming out