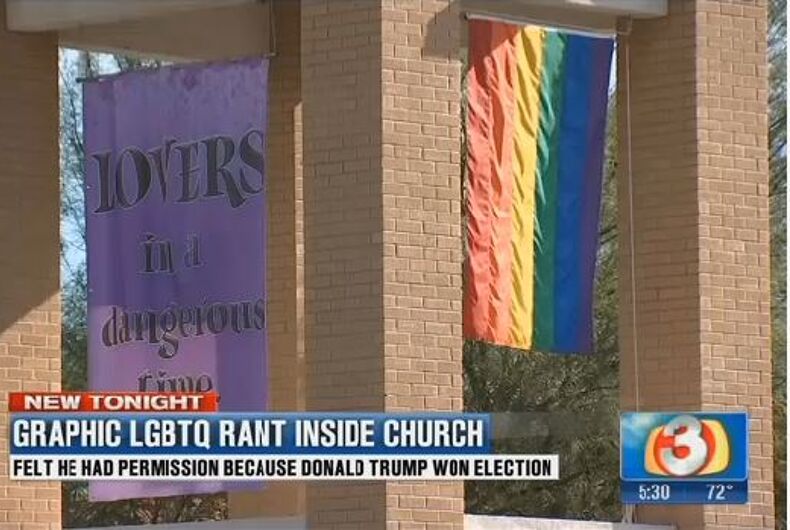 The church now has a flag reading "Lovers in a Dangerous Time" next to their pride flag.Photo: Screenshot, 3TV

A man stormed into an LGBTQ affirming church in Tempe, Ariz., and proceeded to go on an antigay tirade, which included threats to spread lies about the congregation.

Police say the man saw the rainbow flag hanging outside the Community Christian Church and since Donald Trump is our soon-to-be president felt empowered to make his message of hatred and intimdation known.

After telling a church employee what he thought about gay people, he threatened to pay people to protest outside the church and to spread lies about the church with charges of pedophilia.

“He said that if Hillary would have won he would have driven right on by the church without stopping, but because Trump won he felt he had permission to say and act the way he wanted to expressing the hate that he had for this particular group of people,” Pastor Doug Bland told KPHO.

“I think it’s a challenge to us to make sure we respond with love and with grace instead of responding hate for hate,” he added.

Instead of backing down in the face of hatred, the church hung a second flag next to the pride flag, with words reading “Lovers in a Dangerous Time,” in reference to the 1984 Bruce Cockburn song.

The man has not been charged since detectives say the man didn’t commit a crime. If he returns he may be arrested for tresspassing.

Pastor Bland posted about the incident on Facebook, calling for prayers. It has since gone viral.