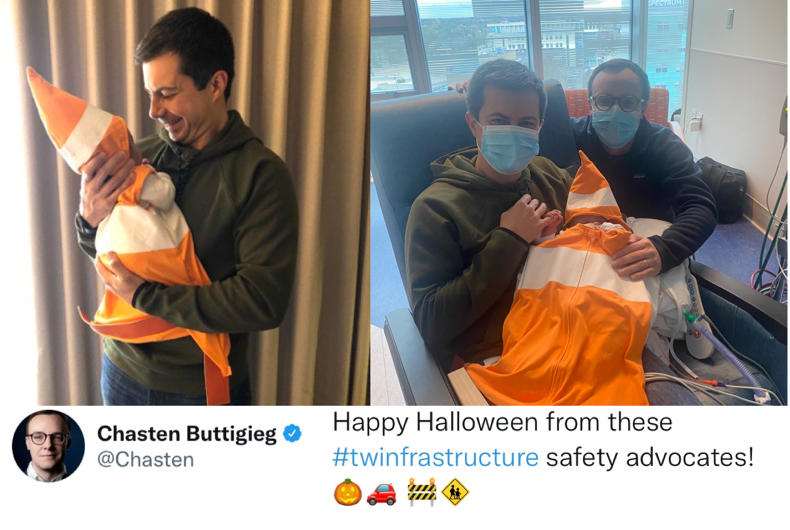 Pete, Chasten, and one of their two twin children dressed as "twinfrastructure" for HalloweenPhoto: Screenshot/Twitter

Halloween fell on a Sunday for 2021, making this entire weekend a “Halloweekend” of celebrations, costumes, and creativity for us to feast on.

Personalities and stars like Niecy Nash and Lil Nas X have shown out so far, and political figures and famous families from Rep. Alexandria Ocasio-Cortez (D-NY) and the Buttigiegs have joined in on the festivities, too.

Related: Jen Psaki gives Halloween-colored gifts to a groom-to-be before he ties the knot

In the heat of the pandemic, last year’s Halloween was also filled with plenty of out celebrities showing off for “the great gay holiday,” as legendary lesbian feminist poet Judy Grahn once described it. Janelle Monae, Neil Patrick Harris, and Eugene Lee Yang stood out. Understandably, some of these Halloween greats have wowed again this year.

The alleged “little gay demons” joined in on the festivities this year, with Tinky Winky, Po, Dipsy and Laa-Laa dressing up as Harry Styles, Ted Lasso, Bob Ross, and Olivia Rodrigo, respectively.

The MSNBC host shared a picture taken during an episode of her show taped on Friday. She dressed up to share her “Absolute Scariest” scenario depicting “what America could look like in January 2025… [if] an even older, weirder Donald Trump” is back in the White House.

Rep. Ocasio-Cortez dressed as Venkman from “Ghostbusters” while mingling amongst constituents at her fourth annual Community Halloween event.

Today was our 4th Annual Community Halloween event and I finally got out of my last-minute cat ears rut!

A little one did try to trick us out of some sweets though 👻🍬 pic.twitter.com/VdnBzUMiNt

California State Senator Wiener (D) said he “finally broke down & did it.”

He dressed as a… wiener. (Complete with buns)

After all these years, I finally broke down & did it.

It’s not pretty, but it has character.

The Keep It host was one of a few famous faces to don multiple costumes for this long Halloween weekend. His first was as Princess Diana in an early paparazzi photo…

… And as the superhero Quicksilver as seen in Wandavision for his second.

Ross put on a scarily-realistic portrayal of the Marvel supervillian Venom.

The Claws actress and her wife dressed up as Kelly Rowland and Nelly, respectively, from the music video for their 2002 hit song “Dilemma.”

After dressing up as multiple characters from the Avatar cartoon franchise last year, Yang did not hold back once again for 2021, dolling himself up as O-Ren Ishii, Lucy Liu’s character from the Kill Bill film series.

Have a happy and safe Halloween, everyone! 🎃 pic.twitter.com/3YgeCU6BRT

The acclaimed actor and Logo Live host dressed up as Mario from the Super Mario Bros. video game franchise this year. Ryan O’Connell was Luigi, and Fin Argus was Princess Peach.

A Halloween to remember 🌈❤️ pic.twitter.com/RmaYt6ZCVz

The iconic music artist and dancer also went the route of multiple looks, paying tribute to musicians that were formative to her: Selena and each member of the girl group TLC.

No Scrubs Music Video
Honoring my hometown girls TLC.
Their swag was on another level. One of the best female groups of all time! This was so much fun! @therealtboz @officialchilli #Halloween

Pete, busy working through the weekend with different appearances on Sunday morning news shows, shared that Chasten had came up with the perfect costume ideas for the newborns: “infrastructure.”

Or better put by Chasten himself, “#twinfrastructure.” He shared a picture just earlier today with both he and Pete holding one of their kids.

Chasten revealed that the family have been “spending this Halloween in the hospital” to take care of Joseph August, or “Gus,” who has “been having a rough go of it” lately.

“We’re so thankful for all of the love and support shown to our family these last few months,” he added.

And also, many thanks for the dedicated and kind medical professionals who have helped take care of our two little pumpkins as they’ve grown stronger, healthier, and cuter!

Last year, Lil Nas X made headlines for days (as usual) just based off his Halloween costume. Nas dressed up as Nicki Minaj in the music video “Super Bass” for one of them, sending anti-gay musicians and figures into a frenzy.

This year, in natural Nas fashion, the star set out to do it big and outrageous.

One of his costumes was as Seth Powers, a character from the Nickelodeon show Ned’s Declassified as played by Alex Black.

The second was Nas portraying his version of Voldemort, a character from the Harry Potter franchise who is infamously referred to as “he who shall not be named” throughout much of it, which is a clear opposite for the “Call Me By Your Name” rapper.

he who must be called by your name pic.twitter.com/G5MeIQmTGu

Lil Nas X also attended Kid Cudi’s Halloween Party on Saturday. He appeared to dress as a wizard while Cudi appeared dressed as a zombie.