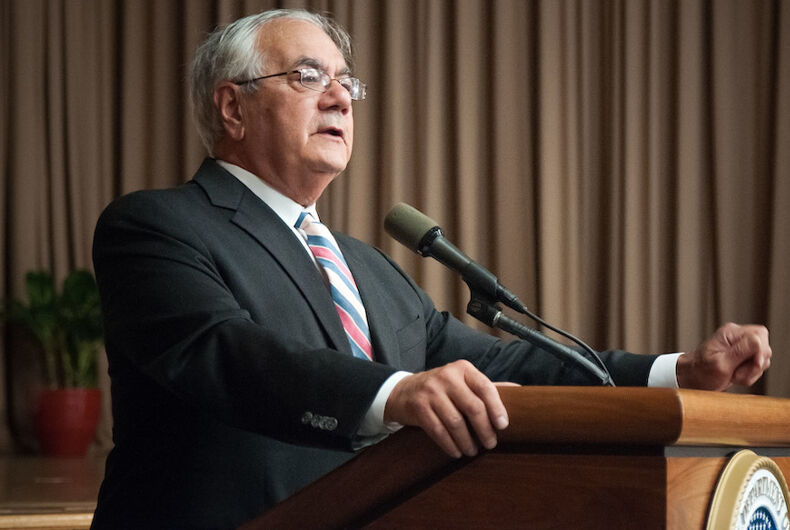 Without doubt, former Rep. Barney Frank was one of the savviest politicians ever to serve in Congress. When Frank came out in 1987, then-Speaker of the House Tip O’Neill expressed his sadness; O’Neill had been grooming Frank to become Speaker and knew that in that era, a gay man could never be elected to the position.

Time recently did an interview with the 81-year-old Frank for LGBTQ History Month, and Frank’s recollections and analysis are as trenchant as ever. Here are five key takeaways from the interview.

When Frank was preparing to come out, other LGBTQ rights supporters asked him not to. “A number of my straight colleagues—maybe six or seven, [some of] the most liberal, most supportive of LGBT rights—came to me and said, ‘Please don’t do that,'” Frank recalled. “‘Yes, we want you to have a happy life. But you’re a very effective ally now on a whole range of causes.’”

In essence, they thought being a closeted Congressman would help gay rights more than someone who was out, a window into the warped political calculus of the time.

Frank regrets leaving transgender people out of the Employment Non-discrimination Act (ENDA). Frank took a lot of heat for dropping transgender people from the federal anti-discrimination measure. It may have been a political necessity, but it was also a betrayal of principle that Frank still doesn’t quite seem to recognize. (Despite doing so, the bill still didn’t become law.) Frank seems to know that was a mistake, although he’s still defensive about it.

“I am regretful that we had the problem with regard to including transgender people,” Frank said. “There was a misperception that Nancy Pelosi and I were somehow failing the transgender community. We were in fact working very hard to get them included. And the question then was, do you take a major step forward if you can’t take [it completely]? And I think that is a shame. I think we did the best we could.”

Frank’s relationship with a hustler was a symptom of being in the closet. Two years after he came out, Frank became embroiled in a scandal when it became public knowledge that he had hired Steve Gobie for sex and subsequently other odd jobs, used his Congressional stature to fix 33 of Gobie’s parking tickets, and write a letter to Gobie’s probation officer.

Meanwhile, Gobie was living in Frank’s house and, unbeknownst to Frank, operating his sex business from it. Frank was eventually censured by the House.

Frank attributes the episode to the unhealthiness of the closet. “First of all, in an odd way that helped me explain to people why I’d come out,” he said. “Remember, several of my liberal colleagues had said, ‘Oh, why are you coming out. You don’t have to do that.’ And when the Gobie thing broke, I said, ‘Now you understand why I came out.’ Because as long as I was closeted, I found it impossible to have good, healthy relationships.”

Frank predicts that the Supreme Court will not overturn marriage equality. That doesn’t mean he’s not worried about the conservatives on the Court going after LGBTQ rights under the guise of religious freedom.

“It’s the sword versus the shield.” Frank says. “The shield, in legal terms, is a doctrine that prevents other people from intruding on you. A sword is used to intrude on others. And while religious liberty should be a shield, there are concerns that people might make it a sword.”

Frank believes that marrying his partner, Jim Ready, was his proudest moment in advocating for LGBTQ rights. Frank needed a little prompting to come to that conclusion though. When first asked the question, Frank demurred, saying, “I’m going to have to pass on that.”

Then Ready piped in from the background: “Marrying me.”

The couple were married in 2012, making Frank the first member of Congress to have a same-sex spouse. Frank acknowledges that the milestone was “good for everybody else, but also good for me.”